While the Taxi trade has a whip-round, the LPHCA show how it should be done.

London is on the front line of a Taxi war, with drivers orgs desperately trying to stop the rise of Uber. 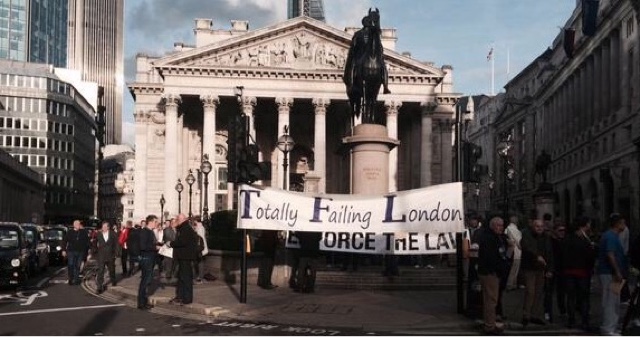 Both the black cab trade and legitimate minicab services are being decimated by Uber, which operates using a system which illegally plys for hire and undercuts traditional Tacis and minicabs on price. It’s also alleged the smart phone app has been given favourable treatment by London’s transport regulator, Transport for London (TfL).

Trade body, the London Private Hire Car Association (LPHCA), has been putting pressure on TfL to crackdown on Uber. Leaked documents show the LPHCA has drafted in heavyweight, “Magic Circle” law firm Clifford Chance to present a legal case to get the taxi app banned in London.

Copies of evidence submitted to the Greater London Authority’s Transport Committee by private hire car operator Addison Lee leaked on social media. The submission, which is part of an ongoing consultation on taxi regulation in London, includes evidence submitted seperately to TfL by the LPHCA in June.

In it the LPHCA, which represents 15,000 private hire and minicab drivers in the capital, and Clifford Chance call for TfL to hit Uber with an immediate ban until big changes are made that could cripple its business.

Here’s a summary of the big five arguments the LPHCA makes against Uber.

1. Uber’s insurance is not up to scratch

Uber requires individual drivers to ensure their cars themselves, rather than hold a fleet-wide insurance policy as is the norm in London. The taxi industry argues that this means Uber is putting public safety at risk, as it can’t guarantee all its drivers are insured.

The LPHCA uses a Schrodinger’s Cat-style argument to say that this is inadequate: because Uber only checks documents when driver signs up, LPHCA claims Uber can’t prove at all times that its drivers are insured. They could have cancelled their policy since signing up. Though there is no evidence that this is the case.

The industry also argues that because TfL allows Uber to operate without fleet-wide insurance, Uber gets an unfair price advantage as these policies are costly.

And by passing the saving on to the customer but still requiring the driver to buy a policy, the taxi industry argues drivers are being incentivised to cut corners on insurance to save money.

Clifford Chance, on behalf of the LPHCA said:

“Uber’s operating model facilitates and encourages increasing numbers of uninsured drivers onto the streets of London by allowing drivers to cancel their policies after registration with Uber.”

The LPHCA argues that the checks on these documents are flawed in the first place, pointing to a report in The Guardian on the ease of tricking the system with faked documents.

Uber processes its UK fares through Dutch subsidiary Uber BV, meaning it gets around charging customers UK VAT at point of sale.

By processing revenue through Uber BV, the company also pays a lower rate of corporation tax. Both Taxi and PH companies say this tax set-up gives Uber another unfair advantage. This issue has already been referred to the UK taxman, HMRC, which is probing Uber’s tax set-up.

A spokesperson for Uber recently said: “Uber complies with all applicable tax laws, and pays taxes in all the jurisdictions it operates in, including the UK.”

The LPHCA tells the Transport Committee in its submission (emphasis ours):

As a direct consequence of the flaws in Uber’s operating model Uber drivers loiter, ply for hire, park illegally and create a public nuisance in areas of high demand such as at airports and stations, undermining London’s profile as one of the safest taxi markets in the world.

Clifford Chance backs this up with some recorded complaints: 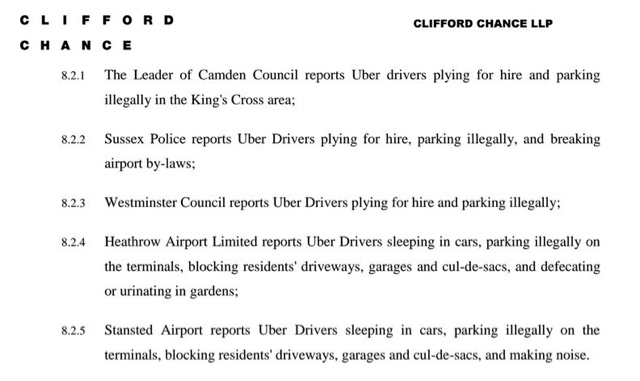 The LPHCA also argues that taking bookings in-car and taking bookings without an operator’s license is in breach of the law and unsafe. Clifford Chance says it: “undermin[es] the important role of the operating centre in promoting safety.”

And because jobs are routed through Holland, Clifford Chance argues “those service elements are beyond effective regulation by TfL,” which again it claims is in breach of the law.

The LPHCA claims Uber “fails to take seriously its obligations to protect customer and driver data.”

Clifford Chance points to reports of Uber accounts being hacked, such as a data break in February that left 50,000 driver details exposed, and says Uber London is not registered in the UK as a data controller, another breach.

5. Uber is flouting the law

The LPHCA accuses Uber of “knowingly, willingly and intentionally flouting local regulation for profit in France, Germany, Belgium, Italy and the Netherlands – almost every European market in which it operates.”

Uber founder Travis Kalanick advocates a strategy of “principled confrontation” with regulators and lawmakers around the world, according to an interview with Vanity Fair. Their growth team motto states it’s easier to ask for forgiveness, than ask for permission.

Clifford Chance says also: “Uber London fails to record destination information as required under the Act, undermining an important feature of the private hire framework in London designed to protect the public.”

‘The risks are increasingly clear’

As the battle progresses, neither side looks close to backing down.

Black cab drivers have been putting pressure on TfL to crackdown on Uber. News broke this week that TfL is considering introducing New restrictions designed to hurt Uber that. But we’ve seen this happen before in a previous consultation in 2010. Nothing came of those recommendations.

Clifford Chance and the LPHCA are calling for Transport for London to immediately revoke Uber’s license: 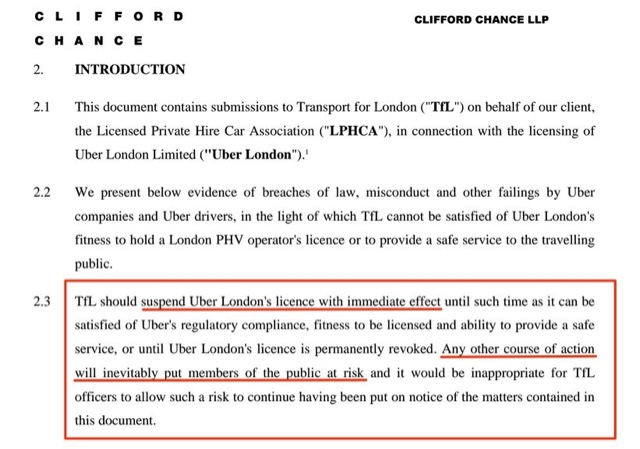 Clifford Chance concludes in its report: “These are not simply technical infractions. As Uber expands the risks associated with its operating model are becoming increasingly clear.

“Uber currently has approximately 17,000 registered drivers and has stated an intention to recruit 42,000 drivers by March 2016.

“However, when confronted by issues in relation to its drivers Uber disclaims responsibility for them on the basis that they are self-employed.

In practice, the quality of regulation, oversight, and therefore the safety of the London private hire market is disintegrating rapidly as Uber expands.” 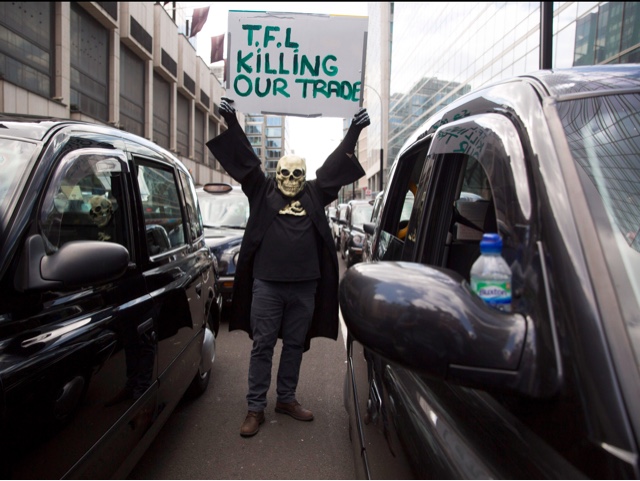