When is A Rank Not A Rank? Alleged Misinformation Over WinterWonderland Rank!

A couple of weeks ago, the Joint ranks committee, under the Chairmanship of the LTDA’s Richard Masset, announced that after 12 months of negotiation, they had secured ranking facilities for the WinterWonderland event. The rank would be situated in Park Lane, opposite Brook Gate in a coach bay that would be suspended.
We were told that no vehicles would be permitted to stop or wait on South Carriage Drive.
But, Westminster Parking Services are now saying we been misinformed!
Drivers reported being issued parking tickets by Westminster wardens while sitting in the rank facility on Park Lane!!!
How can this be, you may well ask.
Surely this is a mistake on behalf of Westminster Parking Services?
When we asked the LTDA a few days ago about the tickets, they said it was just the result of an idiot warden….

They also to exception when we said that the whole ranking issue at WinterWonderland was a complete mess.

It now appears they (the LTDA) have it wrong, and the wardens are acting under instructions from Westminster Parking Services.
If Westminster’s statement below is correct, then the joint rank committee, made up from the LTDA, LCDC and Unite have misinformed the trade and are totally liable.
Westminster council have just replied to a request for information from Taxi Leaks’ special correspondent, about this situation saying: 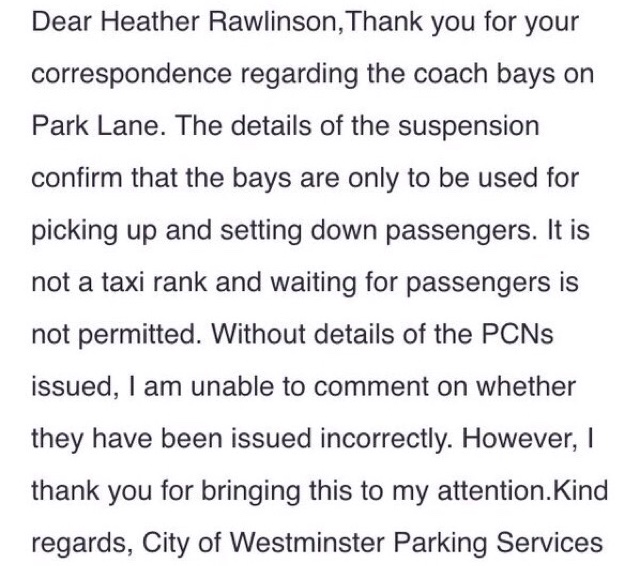 Again this year the trade has been sold down the river by Westminster, the Royal Parks and TfL at this event.
Night after night drivers have reported seeing minicabs being directed into the exit of WinterWonderland on South Carriage Drive, by marshals, where they are being allowed to park up and wait for passengers.
We have asked the LTDA to clarify the situation and also if they (along with Unite and the LCDC) will be compensating drivers, as they have misinformed the trade, leading to the drivers receiving penalty notices.
As of yet, we have no reply
We will provide space should the LTDA, LCDC or Unite like to make a statement about this situation.
Source: TaxiLeaks