In future, Friday the 13th, will forever be associated with one of the worst atrocities inflicted on a civilian population by are small group of religious fanatics.
As bombs exploded around the city, to the sound of automatic weapons, the city went into lockdown and all public transportation was suspended.

People were scared, walking the streets, wondering how they could get back home to their families. Tourists in unfamiliar surroundings, wanting to get back to their hotels.
But then, an extraordinary event materialised as Parisian Taxi drivers stepped up to the mark, turned off their meters and began a night of complimentary journeys to help clear the streets. 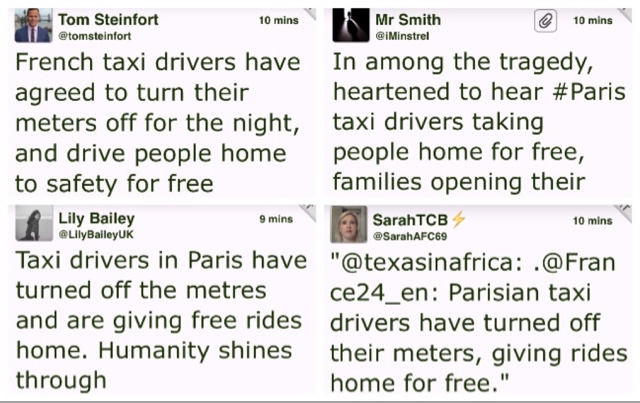 The people of Paris were ferried to safety by the city’s taxi fleet. Drivers switched off their meters, filled their Taxis with desperate people and took them away from the carnage.
With no fear for their own safety, the Parisian taxis drove around the streets, drivers beckoning to the confused and distressed, taking them safely home.
Later into the night, many cabbies went back for the walking wounded, as they left the city’s hospitals.
“Miracle of the Marne.”:

Just over 101 years ago, 6th September 1914, the French were back on their heels. Gen. Joseph Joffre organized a counterattack, and by Sept. 6 his troops were fighting the Germans along the Marne River. With the outcome and possibly the fate of France in the balance, General Joffre called for reinforcements from Paris.

But the railways were clogged and no trucks were available, so the military commander of Paris, Gen. Joseph Gallieni, hailed the city’s taxi drivers. On the evening of Sept. 6, hundreds of cabs assembled at Les Invalides, the military hospital, and by morning of the 7th, a convoy of impossibly top-heavy Renault AG1s with tiny 1.2liter 2cylinder engines was puttering their way towards the front.

It is not known whether the passengers tipped the cabbies, but the cabbies actions tipped the battle over to the French and became the saviours of Paris. 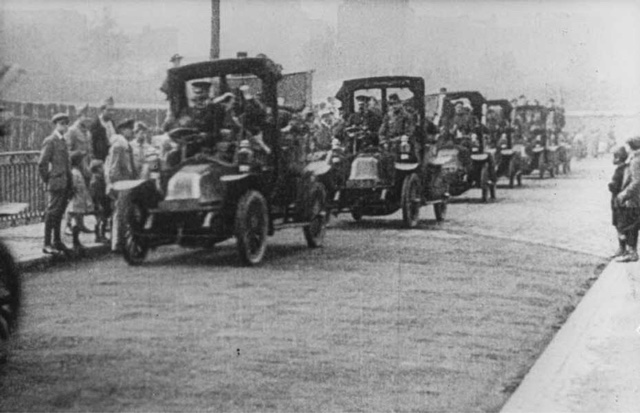 The Renault AG1 was later to be christened “Miracle of the Marne.”
LAST NIGHT IT WAS TAXI DRIVERS, WHO WERE CHRISTENED “MIRACLE OF PARIS”.

Parisians Offer Blood And Shelter:
Long Lines are filming outside hospitals as Parisiens queue up to tonight blood. Many are sharing pictures and information about which hospitals almost in need using the hashtag #dondusang 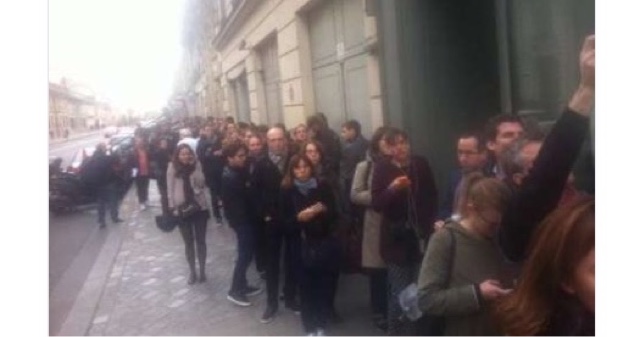 The hashtag #porteoverte (open door) was also used throughout the night two of the rooms to anyone who needed somewhere to stay.

Paris police have placed a temporary ban on demonstrations in the city and surrounding areas until Thursday.
In London there are calls on Facebook for people to gather at Trafalgar Square in London at 9pm this evening to hold a solidarity rally for the victims of Friday’s attacks. #NotAfraid