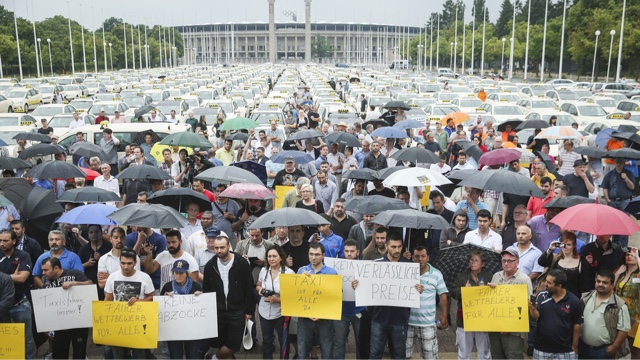 France’s taxi wars took a new twist on Friday night, when several taxi drivers parading as clients, tricked a group of UberPop drivers into picking them up, before later attacking them.

It’s yet another display of the simmering tensions between traditional taxi drivers and UberPop, whose operators use GPS-enabled smartphones to link up with passengers. A service considered as “unfair competition,” by taxis, which say the heavily subsidised UberPop is undercutting their rates.

UberPop’s 4-euro minimum fare is less than the 6.86 euros that the government set for taxis. And their drivers don’t pay the same level of taxes as conventional Taxi owners.

On Friday, taxi unions around the country called for an unlimited strike this Thursday, in front of airports and major rail stations.

“We will stage sit-ins, no marches,” Karim Asnoun of the CGT union, said: “The aim is to occupy the entire space, because we are fed up”.

Taxi drivers brought traffic to a standstill in February this year, and earlier this week, many of them refused to take fares, much to the frustration of numerous tourists.

Uberpop is technically banned in France:

Uber drivers are not allowed to offer cab-hailing services, but must operate from a permanent base. In practice, this rule has not been respected.

On Thursday, a UberPop driver was arrested during a rare control operation, for trying to pick up clients from Gare de Lyon, a train station in central Paris. He was later released on bail.

The legal uncertainties surrounding UberPop have allowed it to fluorish. Early this week, the American company announced it would roll out its services to three new French cities – Marseille, Strasbourg and Nantes.

Jo Bertram also announced last week that Uber London Ltd were ready to launch a version of UberPop in the UK capital.

The battle between taxis and Uber, looks set to continue.

Just one of the many Uber accidents in London last night. An Uber car travelling north in the bus lane on Regent Street, suddenly swerved across the path of another vehicle in the outside lane, deciding to turn right into glasshouse Street without warning, giving the oncoming vehicle no chance, the two cars collide.