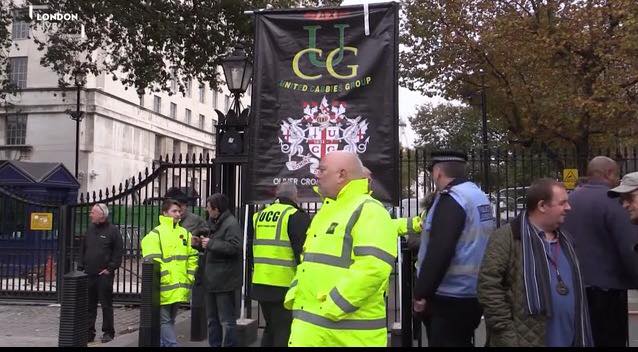 to The  Prime Minister; The Rt Honorable Theresa May.
Hand delivered to 10 Downing Street November 8th 2016
…………………………………………………………………………………………………………………………………………
November 8th 2016
The Right Honorable Theresa May
10 Downing Street
London
SW1A 2AA
Dear Prime Minister,
I write to you as the General Secretary of the United Cabbies Group (UCG) a trade body that represents the interests of the Hackney Carriage drivers in London, and other UK cities.
Our members have called upon us to arrange a formal protest, today, as they now have no confidence, in TfL and its management team; today, we, the Licensed Taxi Trade, bring our discontent with TfL to Whitehall to raise awareness of serious threats to London. We do not call these protests without giving serious consideration to the affects they have, on the general public and we apologise for any inconvenience our protest may cause; however, we feel we are left with no other option as we have exhausted every possible avenue in our attempts to get Transport for London to address our concerns.
2
Whilst we have a number of unresolved issues with the day to day administration at TfL, our main focus is on health, safety and the economy.
A number of recent reports, on the worrying decline in London’s air quality, coupled with excessive journey times, have resulted in an unsustainable increase in traffic congestion, this manifests itself in pollution taking London well above safe limits.
Approximately 9,500 people are dying prematurely every year, twice as many as previously thought. London has breached EU safety limits on NO2 for five consecutive years. (source King’s College London)
Oxford Street has the worst NO2 levels in the world.
As working Taxi Drivers we are exposed to this toxic pollution more than any other road user; it is often suggested that the Taxis we drive disproportionately contribute to these levels, whilst this is true, it is not of the driver’s choosing. We have a very limited choice over the model of Taxi and design criteria of the vehicles we drive. Transport for London have failed to provide the Taxi trade with an affordable choice of vehicle that is more environmentally friendly and thereby allowing us to compete in an increasingly competitive market.
Buses (subsidised by TfL)  are the highest polluters, of all vehicles on London’s roads,  followed by Private Motor cars (because of the number of them on the roads at any time) Taxis are in third place. (source King’s College London)
3
Another consequence is that of massive real loses to London’s economy. We have used official figures to calculate the loss of productivity, to London every year.
The figures are simply staggering and costly; anybody who needs to travel for business, logistics or the emergency services can attest to this.
Transport for London has implemented road traffic management policies that have caused serious damage to London’s health and wealth.
When Leon Daniels took on the role of surface transport director at TfL  road speeds in London averaged 8.98mph. This is now below 7mph.
Sustrans reported in 2014 that 9.6 million trips as car driver/passenger were taken every day (this figure is rising). Based on official figures London is losing 1.4 billion hours, every year, stuck in traffic jams, creating congestion, pollution and costing UK businesses millions of pounds, of lost income.
There are a number of other worrying issues regarding TfL and their fitness to run London’s transportation system.
One of the most concerning issues is the continual rise in rape and sexual assault figures pertaining to Private Hire drivers in London; TfL have failed in their duty to protect the public and their licensing practices must be investigated. The last published figures showed 111 sexual assaults, committed by Private Hire Drivers; the latest figures, that were due to be released in September 2016, are still unavailable and despite FOI requests remain so. Leaked information suggests this has risen to 263 for the six months to September.
4
There have been several allegations of corruption at TfL ranging from contracts awarded for underground 3G infrastructure to tendering for bus contracts.
There is an individual who has claimed he was directly told that unless he submits a payment, his solution to a pollution problem will not be accepted. (I have this person’s details and he has repeated this accusation to me)
There are also some very dubious and questionable relationships between senior TfL staff and mini cab company Uber that have been uncovered, in leaked emails, amounting to “Coaching” answers to difficult questions, that would expose illegal behaviour. We believe this was done with the sole purpose of misleading the public and the Greater London Assembly (GLA).
There is also the Security risk from lack of enforcement on counter terrorism. A while ago, there was the potential for two very serious incidences. A Private Hire Vehicle (AKA mini cabs) was left unattended, outside a London nightclub whilst filled with gas cylinders; the vehicle was towed away (oblivious to the danger) and upon unloading, at the car pound, a bomb was discovered – fortunately it failed to detonate. A second vehicle, disguised as a mini cab, was identified nearby, by police – that also failed to detonate. With so many PH vehicles parked outside venues and TfLs total lack of effective enforcement this could happen again but next time with unimaginable dire consequences
5
TfL is an organisation with a budget of £10.4bn 2016/7 but is not accountable to anyone. Even the Mayor seems to have no power to deal with this behemoth of an organisation that is now very apparently out of control.
There is something very seriously wrong at TfL but this is not just our view. A recent GLA future proof report, described TfL as “woefully inadequate ; we believe this warrants an inquiry.  We therefore formally request that you grant a Statutory Public Inquiry. For the sake of London’s, Health, safety and wealth.
We would welcome the opportunity to meet with you or your representatives in order to discuss our concerns in further detail.
Yours faithfully
Len Martin
General Secretary
United Cabbies Group