UCG On Night Ops With The Tout Squad. 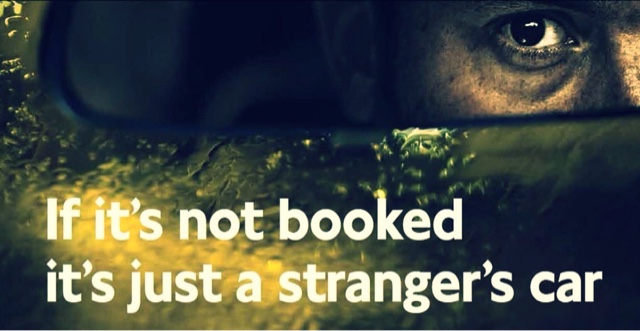 On Friday November 13th, Trevor Merralls and I were granted very rare full access to the Mets undercover Cab Enforcement Unit and were invited to join them for a night to observe what they do and how they do it.
We met at 9pm and were warmly welcomed at their Kings Cross base. The team is led by Inspector Tracy Allison, under her are 5 sergeants and 55 PCs. It seems a lot but bearing in mind that’s to cover 31 London Boroughs 24/7 it really is not. The two proactive teams (those on the streets) are split into two groups of 24.
As they are specialist officers and if numbers are diminished through sickness, injury or leave they cannot draft in untrained temporary staff, with the exception of decoys, so you can see they are understaffed. Staffing levels notwithstanding, we can tell you they do an excellent job, are totally dedicated and their professionalism is second to none.
At the briefing Tracy told us that they work on intelligence received from the Met, TFL and cab drivers who report touts etc.

The number one area for touting and sexual assaults is Shoreditch. With that in mind we got in an unmarked car with Tracy and her Sergeant ,Mike and headed toward Shoreditch High St.
Eventually we and the second car parked in Garden Row and waited.Two decoys were situated within 30 yards in Gt Eastern St. No tout would ever know that the young woman on the corner and man opposite were Police. They blend in perfectly.
Our in car teams were in constant contact with the decoys and each other; completely invisible to the touts. Tracy explained that there is a marked difference between those deemed illegally Plying for Hire and those blatantly Touting. 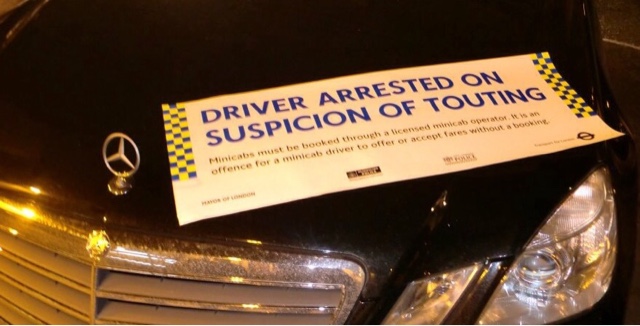 To clarify this, if a PHV is empty and sees a prospective fare with their hand up , if they stop and the prospective passenger asks to be taken to wherever, this is classed as P4H.
If a PHV sees a person who looks like they may be needing a ride home, stops and asks them if they need a cab, its Touting.
The reason the CEU target touts as oppose to those Plying for Hire is as follows:
• Illegal P4H, although a criminal offence, it is not what is known as a ‘Recordable Offence’, by which I mean the police cannot take a DNA sample when the suspect is arrested.
• Touting is Recordable and a DNA sample is always taken upon arrest
• DNA samples from touts have led to many convictions for crimes committed in the past, which is why the CEU will wait to arrest one.
In a perfect world they would have the manpower to nick both P4H chancers and Touts. But unfortunately, the world in which we work is far from perfect.
We saw a number of PHVs pull up next to the decoys and then drive away. But, after some 40 minutes we had a bite.
A car stopped next to a decoy and engaged in conversation, on a hand signal our car blocked the the tout from the front and the second car blocked him from reversing. It happened so quickly he had hope to escape. The CEU have this blocking exercise perfected.
This character had no licence, no insurance and was suspected of taking and driving away. He was arrested and taken to a local custody suite and the car was seized and driven to a police pound.

Another unlicenced tout was arrested in Fairchild St and taken to a different custody suite to be charged.
At this point the Shoreditch area was seen to be ‘burnt’, Police jargon meaning that their presence there was known and it was time to move on.
Tracy and Mike decided that we would then drive to Camden, another toutshotspot.
On the way Tracy called her colleague who had taken the first tout to be charged and asked if anything was known about him.
It was, she immediately rang the officer who was impounding the vehicle. That was when I heard the most chilling words;
‘Search that car for a Rape Kit‘ !!
A rape kit consists of a rope, gloves, weapon etc.
It transpired he had serious previous, including the worst crime toward a woman. If you what is difference between burglary and theft, you would understand the range of crimes he did.
He was a dangerous predator and who knows what he had in mind that night.

I must reiterate that this person was unlicensed but there are many more like him on the streets.
We next parked in Camden and the decoys were deployed. After a while a very suspect PHV stopped. The driver got out and was about to approach our man but a marked police car with blue lights flashing, on a completely unrelated job, stopped within 20 yards of us and the prospective tout did nothing.
We then moved on to Camden High St and it didn’t take long before our decoys were touted, this time by a licenced PHV driver. He was arrested and taken away for questioning and charging.
As I said earlier each of these touts can have DNA samples taken which is of great help to the police.
That night was a real eye opener as to the scale of the problem; it is huge.
The CEU do their level best to fight the problem but are outnumbered. They certainly shouldn’t be blamed for any inadequacy, it’s not their fault. It’s a game of Cat and Mouse.
On Friday it became clear there are many more mice than cats.
(We have not forgotten who ran the mouse breeding programme)
Angela Clarkson
UCG Secretary