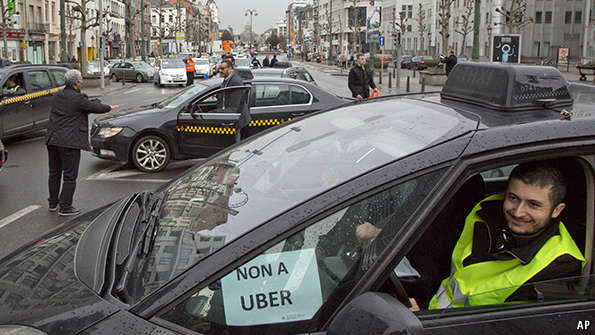 In the third quarter of 2014, Uber accounted for 3% of business travelers’ incidental expenses… Just one quarter later, that share expanded to 5%. As a percentage of total taxi rides, Uber usage has tripled from 11% in January 2014 to 33% in January of this year. To the extent business travelers are using Uber’s taxi and ride-sharing services to replace traditional taxi rides, there’s a modest hit to travel budgets. While the upstart is commonly considered a less-expensive alternative, the average amount expensed for an Uber ride in the fourth quarter was $32.48, according to Certify’s data, compared with $30.58 for traditional cab rides, or a difference of 6.2%. [emphasis added]

My experience, however, suggests that Uber rides don’t always serve as one-to-one replacements for a taxi. I often use Uber to go places that taxis don’t or won’t. And I’ll sometimes use it for longer rides for which I’d never use a taxi (because the cost would be prohibitive). Colleagues and friends report similar experiences. And in many cities (including Washington, DC, where I live), Uber now offers the less-expensive UberX service, which can be dramatically cheaper than a traditional cab.

At some point, it pays simply to look at the rates, not the Certify data. In my city, at least, Uber’s rates are significantly lower. (I know this in part because the taxi industry, which is more heavily regulated, complains about it constantly.)

The real problem with Uber isn’t that it’s more expensive than taxis. It’s that in many cases, it’s more expensive than a rental car. Rental cars can be incredibly cheap, and if you’re in an area that has parking available, it may make more sense to drive yourself. Sometimes we get so caught up in a new thing that it is easy to forget that once in a while the traditional option is superior.