Uber – The Turn Of The Screw

Out there on the right, car and passenger matching service Uber is seen in an unquestioningly positive light: typical is Mark Wallace, former stalwart of the so-called Taxpayers’ Alliance, who has journeyed via the IoD to ConHome. “[Uber] Drivers work for themselves under better conditions with a better income” he proudly declared, although the name of the comparator was not given.

But then, Wallace and his fellow Clever People Who Talk Loudly In Restaurants have been seduced into believing such ideas, without bothering to examine just where the real power in this enterprise lies. And where it lies is not with the drivers, as those Stateside are starting to find out. Without any collective bargaining ability, they have to do what they are damn well told.

Uber gets into price wars; it therefore lowers prices. Driver earnings take the hit. As to insurance requirements, the New Yorker noted “in San Francisco, for instance, taxi operators have to provide a million dollars of liability coverage for their cars at all times; Uber, until recently, covered vehicles only when they held a passenger. But Uber, and companies like it, argue that they’re completely different”. 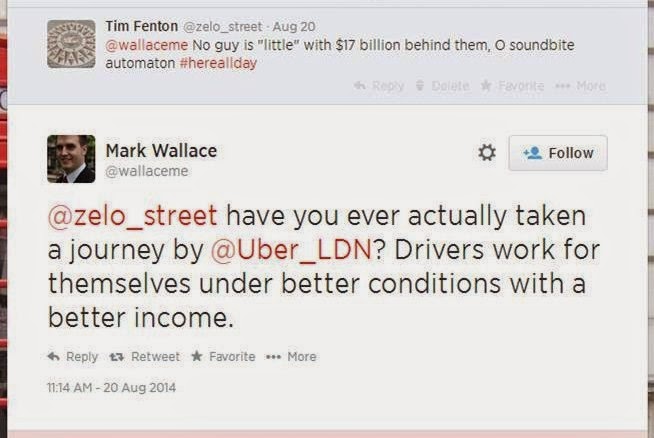 Behold the belief system of the right …

Yes, Uber claims that it is different, that it should not play by the same rules, and that it should therefore not be subject to all those inconvenient fuddy-duddy olde-worlde regulations. So Uber has recruited the likes of David Plouffe, former advisor to the first Obama presidential campaign. His job will “include lobbying the government to come up with policies that are more favorable to Uber’s interests in the first place”.

But note that the talk here is of Uber, not its drivers, and that should surprise nobody: the little guys at the sharp end are mere cannon fodder. This was demonstrated when “an Uber driver hit and killed a six-year-old girl in San Francisco. The driver’s Uber app was turned on, but he wasn’t carrying a passenger, so Uber said that he, and not the company, should be held responsible”. 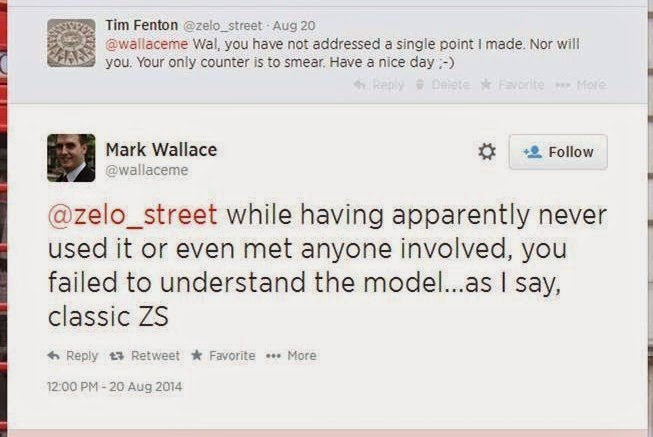 … along with their inverted view of corporates

That driver may not have thought about such a scenario when he signed up. But you can bet your bottom dollar that Uber and its lawyers did. All those drivers are a mere means to an end, as Plouffe’s first task is to help launch the Uber API, to enable the integration of hotel chains, airlines, restaurants, and travel advisors. Oh, and Starbucks, of course. All this benefits the multi-billion dollar corporate.

To comprehend what Uber is about, its aggressive stance, and determination to have rules and regulations re-drafted to suit Itself Personally Now, the last people to consult are the unfortunate drivers. As he and his pals continue to back the corporate Goliath against the one-man and one-woman Davids who drive black cabs around London, perhaps Mark Wallace will understand the reality of the situation.

It is an understanding some of us have already grasped.