Police forcing drivers to get back in cars, but area remains blocked through noon hour 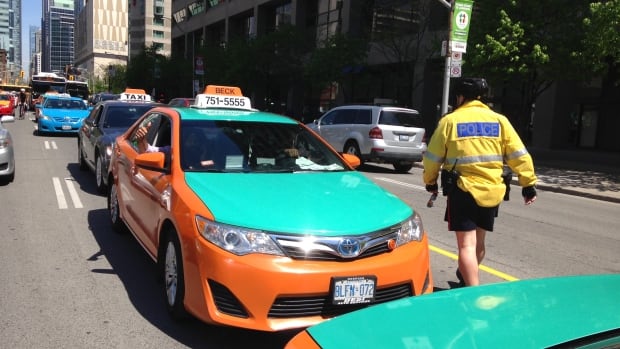 A police officer attempts to get unoccupied taxis to stop blocking traffic on Bay Street near city hall. (Mehrdad Nazarahari/CBC )

Taxi drivers are blocking traffic around Toronto’s city hall to draw attention to what they say are unfair practices by the ride-sharing company Uber.

The battle between traditional taxi services and the new smartphone app-based Uber has been raging since the company came to Toronto in 2012. Taxi companies like Beck Taxi pay the city fees for licenses to operate in the city, while Uber does not.

Uber doesn’t own a fleet of vehicles, but instead has a service that connects customers to drivers who charge for the ride they offer. Uber co-ordinates the payments.

In a statement issued Thursday afternoon, Susie Heath, a spokeswoman for Uber, defended the company.

“Instead of blocking the roads, we’re at the table engaged in an open dialogue to help advance the best interests of Torontonians,” Heath wrote. “We’re changing how people get around our city and improving the lives of thousands of local driver partners by providing flexible earning opportunities. Our focus remains on working with city officials to create a sensible regulatory framework for ridesharing, the benefits of which are already being enjoyed by hundreds of thousands of Torontonians.”

Taxis began blocking Bay Street on the east side of city hall around noon on Thursday. Drivers got out of their cars in protest, leaving them unoccupied on the street.

Toronto police were on scene forcing drivers to get back in their cars, but the area remained blocked through the noon hour.