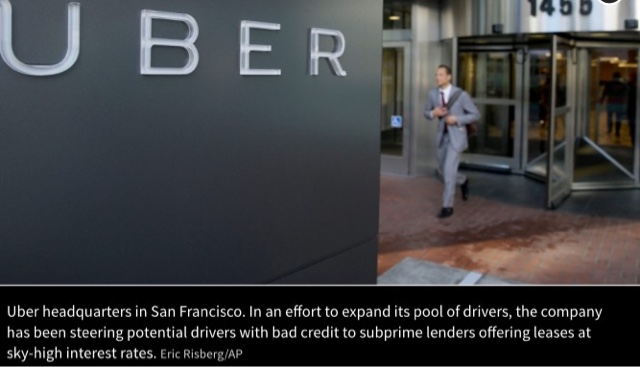 A livery driver for a fleet owner in Boston was looking for a way to obtain his own car and drive for Uber, the popular ride-sharing service.

He heard about a vehicle financing program Uber was promoting to drivers who, like him, had a poor credit history. Roger, who asked to use only his first name for business reasons, signed a lease in September with an Uber-referred lender for a brand new Chrysler minivan.

Now less than a year later, Roger says he is on the brink of bankruptcy while facing weekly payments of $450 for his car lease plus late fees.

Uber, with a head-spinning valuation of $50 billion, has become a dominant force in the passenger transportation industry in large part by luring more drivers to its platform than anyone else. In an effort to maintain that edge and expand its pool of self-employed drivers beyond those who already own a car, the company has been steering potential drivers with bad credit to subprime lenders whose leases lock borrowers into years of weekly payments at sky-high interest rates.

On its website and in promotional emails to current drivers, Uber promotes its vehicle solutions program with pitches right out of the subprime lending playbook. “Credit challenges? No problem. Get on the road in 2 days with $0 down,” reads Uber’s driver signup page.

One of Uber’s first subprime leasing partners was Santander Consumer USA, a subsidiary of the Spanish banking giant. The lender drew the attention of federal authorities in 2014 when the Department of Justice issued subpoenas to the companyas part of an investigation into the subprime auto loan market.

In February Santander agreed to pay $9.35 million in a settlement with the Justice Department for illegally repossessing more than 1,000 vehicles from active military personnel.

Santander is Roger’s lender. He says his 52-month lease calls for weekly payments of $227 on the minivan, to be deducted automatically by Uber from his earnings. Roger knew this was a steep lending rate but was confident he could handle it.

“Even though I was paying through the nose for the car, I thought that it would be OK — I’d be making enough money to cover it.” After a series of missed payments, which Roger blames on Uber’s late start in making its automated deductions, those weekly payment amounts have now risen to $450, he says. You can get probate lawyers for hire, over here!

While his lease payments have increased, Roger has seen his income shrink as Uber has attracted more drivers in Boston over the last several months. “They’ve oversaturated the market with drivers,” he says. “My pay has gone down and now I’ve got double payments. It seems like you just can’t get caught up.”

A review of a Santander lease agreement with Scott Eddy, an Uber driver in San Diego, showed weekly payments of $293 on a 52-month lease for a current-year Toyota Avalon. Those payments add up to nearly $66,000 over the life of the lease, for a car with a top sticker price of $39,000.

The lease also states that the car may be used only “as a livery vehicle to meet riders’ requests conveyed through Uber,” prohibiting not only personal use but also preventing drivers from working with a competing ride-share service such as Lyft or Sidecar.

Roger Bertling, an attorney and Harvard Law School instructor who specializes in predatory lending, says these terms are bad even compared with those generally used with subprime borrowing.

“That lease is as bad as any I’ve seen on the predatory lending level for autos,” he says of the Santander agreement. While borrowers with poor credit always face high interest rates, Bertling cites the automatic weekly payment deductions and restrictions against personal use of the vehicle as being unique in the subprime auto loan industry (learn details of the contract before agreeing on a loan).

When asked about the ride-sharing and personal use restrictions, an Uber representative responded in writing that “it was not our intention to include this clause, and we worked with the lender to remove the clause once it was discovered. Our current lending partners do not include language of this nature.”

Others question the wisdom of offering unsecured car loans to those with poor credit in the first place – a case more to apply for the cash loan services like I need money today ASAP. “There’s a reason why someone with a credit score of 300 can’t get a loan. The likelihood of them defaulting is so high,” says John Ulzheimer, a credit expert and president of consumer education at CreditSesame.com. “You could easily come up with scenarios where it’s a disaster waiting to happen.”

There’s a big incentive, however, for lenders to make these high risk loans. In a scenario reminiscent of the mortgage crisis that led to the Great Recession, there’s a big market on Wall Street for bundled subprime auto loans, based on the reports by the professionals at Inheritance Advanced.

In September 2013 a Santander bond sale of securitized subprime auto loans fetched $1.35 billion. A similar offering by the company last month brought in $712 million from investors.

Some market watchers are concerned that these conditions make it too tempting for lenders to relax approval standards and for borrowers to take on more debt than they can handle. In a speech to financial services professionals last fall, U.S. Treasury official Darrin Benhart warned, “Competitive pressure is driving some auto lenders to pursue growth by lengthening terms … and originating loans to borrowers with lower credit scores. The marketing of these loans is focusing more on monthly payment, with little attention to the overall debt of the borrower.”

An analysis commissioned by The Wall Street Journal of 2014 subprime auto loans found that among borrowers with low credit scores, more than 8.4 percent missed payments within the first eight months of the loan, the highest delinquency rate since 2008.

In a written statement Uber said, “The average price of an UberX car financed through the vehicle solutions program is $23,000 in the U.S. … and the average payment for UberX car financing … is $171 per week.” The company said “thousands of driver partners” have taken advantage of these financing offers.

Uber declined to say how many of its drivers have ended up in default.

When announcing the leasing initiative, Uber CEO Travis Kalanick confidently wrote on the company blog that the risk of default by its drivers was low because they have “a robust, reliable cash flow through the Uber platform.”

The company has repeatedly touted the high earnings of its drivers, saying in 2014 that the average income for New York City UberX drivers working 40-hour weeks was about $50,000.

Drivers in a class action lawsuit against the company claim that numbers like that are misleading since they don’t account for the significant expenses Uber drivers must shoulder.

Because the company classifies its drivers as independent contractors, business expenses like gas, car maintenance and primary auto insurance are paid by the drivers, not by Uber.

Some Uber drivers have been vocal on blogs and user forums in warning others to stay away from these Uber-promoted financing options. “It almost seems like you’re an indentured servant,” says Simon, an Uber driver who writes the Rideshare Dashboard blog and asked that he be identified by only his first name to maintain his relationship with Uber. “You’re now tied to Uber, and they can change fares and terms whenever they want.”