Uber To Go After London’s Airports.

After decimating the London Taxi and Private hire trade’s business model, it seems Uber have now set their sights on London’s airports.
Already in place is a holding system which is being used (illegally of course) at Gatwick. Cars are booked in automatically as the enter the parameters of the system. 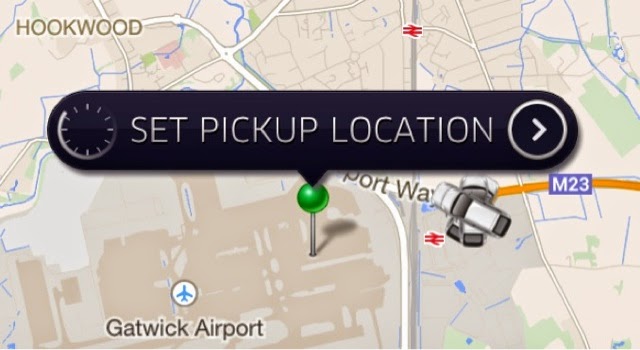 The driver is then given 15 seconds to accept. After acceptance, they are allocated a queue position number.

The company boasts that because of the amount of PR, publicity and advertising planned, drivers won’t have to wait long, unlike the Feeder Park where drivers often do four hours.
Plus don’t forget, many of these travellers already have Uber accounts.
Airport Cabbies will obviously point to the fact that minicab firm Addison Lee, have been doing this for years, but let’s remember Addi Lee’s prices are considerably higher than Uber’s rate unsurged.
It’s also no good sitting back saying “doesn’t affect me, as I don’t work the port,” but cast your memory back to the period when the air space was closed due to the ash cloud.
This week, Uber drivers received an email from the company which states:

We know that airport pick ups and drop offs can be a headache for drivers: it’s not clear where to pick up from, it’s often difficult to reach your passenger and explain where to meet, there’s no queuing system and sometimes it has felt the flat fares aren’t fair.
Good news!
We’ve listened to your feedback and worked with our engineers to bring you a number of improvements to the airport pickup experience that will make life better for you, our valued partners!  Key changes include:
Clearer and fairer flat rates
Reimbursement for parking charges added to the fare
Airport queuing system
Better pick-up locations
The changes will go live for X and XL on Monday 22nd December. We’ll send you a reminder next week!
CHANGES TO FLAT FARES
Airport Flat fares to Heathrow Airport, Gatwick Airport and London City Airport are going up for all car types. On average, fares are going up by 5% to 15%. Plus, flat fare zones will now be more intuitive: an E postcode is East London, a W post code is West London, etc.
We will email you with a link to the full schedule of fares next week.
Please note, there is no flat fare for Luton or Stansted airports.
VIRTUAL AIRPORT QUEUEING SYSTEM
The typical Uber system of matching a rider to the nearest driver works well in the city centre, but can be frustrating at the airport.  We have worked with our engineering team to bring you a better option, designed just for airports!
To make things fairer, we’re introducing a queueing system . When you come into airport area, you’ll be told your position in the queue. When you reach the front, you’ll be sent the next request – you’ll have around 15 seconds to accept so make sure you’re ready! This means that the driver who arrived first will get the first request – no one will spend a long time waiting while watching other drivers get all the requests.
PICK-UP LOCATIONS
There has been some confusion as to where it is safe to pick up passengers, and airports are closely watching for drivers picking up where they shouldn’t be. From Monday 22nd December, when collecting from the airport, you should park your car in the short stay car park at the terminal and make your way to arrivals to meet your passenger.
We will also provide you with an Uber sign to hold up so your rider can find you. Read on for information on when and where to pick up your sign.
We’ll be notifying all passengers coming into London Heathrow, London Gatwick and London City Airports of the new airport pick up system so they will know to meet you in arrivals.
ENDS.
Editorial Comment:
French Taxi drivers are planning to block the main roadways into Paris on Monday 15th December, after a court rejected a bid to ban the amateur car service UberPop, while the minicab company continued to battle lawsuits in several other countries.
Its been suggested we should flash demo the French Embassy in support of tomorrows French taxi drivers strike v Uber.
If you are on Twitter, please look out for tweets from @Flash_Demo
@TAG_HIT_SQUAD
Don’t forget, when we had our demo against Uber, the French Taxi drivers sent a delegation over to London in a show of solidarity.