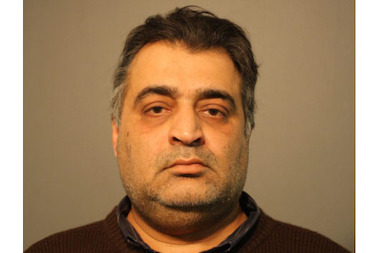 Adnan Nafasat, 46, choked and groped a man he picked up in Boystown last summer, prosecutors said.

Adnan Nafasat, 46, choked and groped a man he picked up in Boystown last summer, prosecutors said.

The attack happened in the early morning hours of July 31 when the victim requested an UberX ride in the 700 block of West Cornelia Avenue, Cooper said.

Nafasat told the man to sit in the front seat because the car’s backseats were dirty and broken, prosecutors said. Nafasat then headed south to a neighborhood the victim didn’t recognize.

As he drove, Nafasat repeatedly groped the man, Cooper said. Each time the car stopped in traffic, Nafasat allegedly choked the man so that he couldn’t escape.

Nafasat eventually stopped the car and tried unsuccessfully to force the victim to perform oral sex before driving the man home, Cooper said.

Nafasat was arrested Tuesday and charged with kidnapping, criminal sexual assault and unlawful restraint. Prosecutors did not say why he wasn’t arrested sooner.

Nafasat’s attorney said his client is married with three children.

This is the second case of an Uber driver being charged with sexual assault in Chicago. On Nov. 16, a driver allegedly raped a woman who requested a ride.

Uber data was used to track down Nafasat, authorities said.

“We immediately removed the driver from our platform upon learning of the allegations and have been assisting authorities with the investigation,” said Uber spokeswoman Jennifer Mullin.