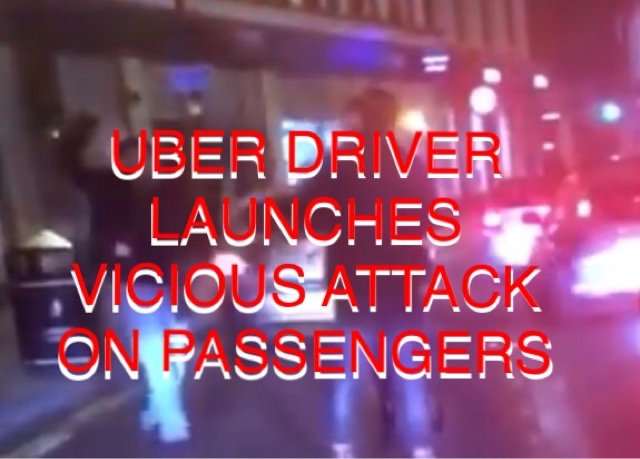 An Uber driver and a passenger brawled in the middle of Wandsworth Road, while a female attempted to break them up.

Its alleged that the passenger lashed out at the driver who retaliates by violently swinging a weapon, during this fight on Friday night. But on closer inspection, you can see the first blow was actually struck by the Uber driver, who has a weapon in his hand.

If you are an Uber driver, check out these cheap uber insurance quotes where you can learn about protecting Uber drivers if a passenger is hurt or injured whilst in your car and brings a claim against you.

The Uber driver, who appears to be wearing a Transport for London lanyard, told police he was punched by his customer when they arrived just before 11:45pm.

A passing taxi driver, filmed the fight from his cab and has posted the footage on Twitter, FaceBook and YouTube, where it has been shared hundreds of times.

Social media users were quick to comment on the fight.

Another asked: ‘Is that a weapon in the Uber driver’s hand?’

The cabbie who filmed the incident said it looked like the Uber driver was brandishing a ‘wrench or a spanner’.

He added: ‘It was just shocking behaviour. I don’t want to jump to conclusions about who was at fault, and it could have been the passenger’s fault, but if you are a professional driver, you shouldn’t be fighting with passengers.

“We were called to reports of a fight in Wandsworth Road,

“An Uber driver aged in his 40s reported he had been assaulted and punched by a male passenger.

“No injuries were reported and no arrests have been made. Enquiries continue.”

So no charges here then even though the Uber driver can be seen dangerously brandishing an offensive weapon. And yet earlier last year, a Taxi driver was arrested just up the road from this attack by an undercover policeman, for doing a u-turn in reply to a nod and asking the officer if he required a Taxi.

Watch the video and pay close attention to the very beginning. The Uber driver can clearly be seen hitting the passenger who’s head is knocked backwards with the wrench I what appears to be a preemptive strike.

Unfortunately, the story has appeared in the Mail on-line where the video has been edited down to look like the passenger threw the first punch.