It seems that the Licensed Taxi trade’s fears of escalating sexual attacks on passengers using the UberPool service have been verified.

This dangerous service should never have been given he go ahead by TfL and should now be immediately banned.

In a bit to halt attacks on UberPool journeys, Uber has updated its guidelines to ban passengers from flirting and vomiting, amongst other misconduct.

These rules come following a year in which the minicab app company has been plagued by allegations of sexual misconduct.

In March, internal data also revealed that the company had recorded five rape claims and almost 170 cases of sexual assault between December 2012 and August 2015.

These passengers behaviour guidelines are a first for Uber, and give examples of unacceptable behaviour, which includes flirting, “vomiting due to excessive alcohol consumption” and vandalism. If passengers break these rules, they could face being permanently banned from the service.

In a statement, the company have tried to blame passengers for sex attacks on drivers

They also went on to say:
“Most riders show drivers the respect they deserve, but some don’t – whether it’s leaving trash in the car, throwing up in the back seat after too much alcohol or asking a driver to break the speed limit so they can get to their appointment on time.
“This kind of poor behaviour is not OK
Uber made no comment about the alleged attacks by drivers on vulnerable passengers. 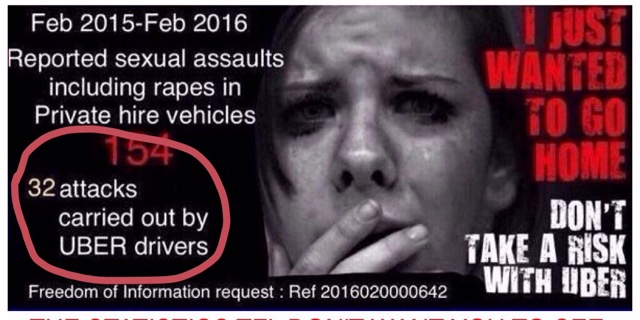