“How safe are women in India when travelling around the streets of its cities?” asks the BBC’s Yogita Limaye

Authorities in the Indian capital, Delhi, have banned international taxi-booking service Uber after a driver allegedly raped a female passenger.

A transport department official said the company had been “blacklisted” for “misleading customers”.

The 26-year-old woman used the smartphone app to book a taxi home on Friday but says she was taken to a secluded area and raped.

The driver has been remanded in custody for three days.

He was arrested on Sunday and appeared in court on Monday afternoon.

Scuffles broke out at a protest in Delhi over the case

Some who had gathered outside the court tried to attack him as he was brought out, but police rushed him to a waiting van and took him away.

Police say they will charge him with raping the finance company employee on Friday night when she used the taxi to take her home from a restaurant. 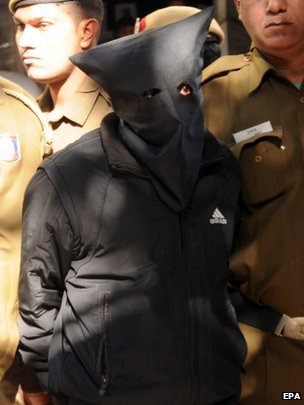 Uber, which is growing in popularity in India, has been accused of failing to conduct adequate checks on its drivers.

“(The) Transport Department has banned all activities relating to providing any transport service by the www.Uber.com with immediate effect,” news agency AFP reported, quoting from a government statement.

The ban means any Uber taxi in Delhi will now attract a fine or even be impounded, officials say.

The company is still accepting bookings on its app and it is not yet clear how the ban will be enforced since Uber taxis do not carry any visible branding.

Before the ban was announced, Uber described the incident as “horrific” and said it would do everything “to help bring this perpetrator to justice”.

“Our entire team’s hearts go out to the victim of this despicable crime. We will do everything, I repeat, everything to help bring this perpetrator to justice and to support the victim and her family in her recovery,” Uber CEO Travis Kalanick said in a statement.

He said Uber would “work with the government to establish clear background checks currently absent in their commercial transportation licensing programs”. 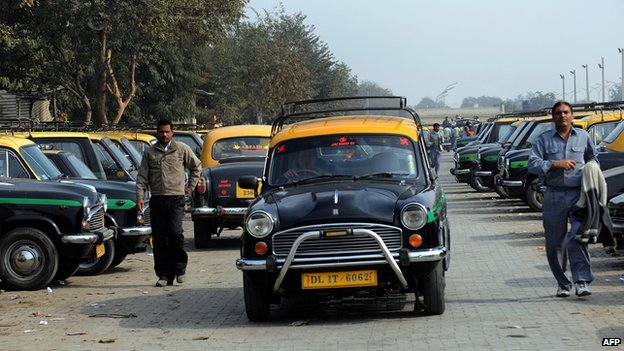 I have been using taxis in Delhi for the past 14 years. The main option initially were black-and-yellow, smelly and dilapidated Ambassadors run by the local taxi rank and I used them regularly, night and day.

That was until a few years ago when private “radio taxi” services were introduced which promised swanky new cars and better trained, more polite drivers.

That’s when many people, including me, switched to them even though they were more expensive.

I began to use Easy Cabs, Mega Cabs and Meru. I would call into their call centres and book a pick up and they almost always delivered.

These cars are all fitted with GPS which means they can be tracked as they journey through the city’s streets.

Safety is an issue in Delhi and like most women in the city, when I get into a taxi alone, I call home and give the car licence plate number and an estimated arrival time.

Meru, one of the largest radio taxi operators in India with nearly 6,000 cars, also introduced a “trip tracker facility” where an automatic messaging system sends regular updates about your trip to a contact of yours.

But as many of the Meru, Mega and Easy cabs have been run down from overuse, in recent months, I began using the newer services like Ola, TaxiForSure and Uber which connect customers with drivers through their apps and charge a commission on every ride.

After the weekend incident, I have decided to go back to my local taxi rank – I’m more comfortable with the smelly Ambassador with the driver who has been driving it for decades.

Uber, which is based in San-Francisco, said safety was paramount and that it had GPS traces of all journeys.

Established in 2009, the company operates in dozens of countries and recently attracted investment which values it at $40bn (£25bn).

The latest allegation of rape has again put the spotlight on the issue of sexual violence against Indian women, following a series of recent incidents.

It comes days before the second anniversary of the gang rape and murder of a student on a bus in Delhi, which prompted global outrage and a tightening of the laws on sexual violence.

Correspondents, however, say tougher laws have failed to bring down the number of rape cases – according to the National Crime Records Bureau, India recorded 33,707 cases in 2013 as against 24,923 in 2012.

And many in India are taking to social media to express their anger about the latest incident with #DelhiShamedAgain trending heavily on Twitter.