The cabbies smashed a red taxi in a symbolic show of their anger over competition from mobile car-hailing apps. Photo: Dickson Lee

A group of cab drivers smashed a taxi yesterday, calling for the government to curb the practice of private car drivers offering cheaper rides through car-hailing mobile apps such as Uber.

To Sun-tong, a spokesman for the Motor Transport Workers General Union, said some members had seen revenue drop by 20 per cent after the introduction of mobile apps in Hong Kong.

He foresaw that their revenues would decrease further if the government did not take prompt action.

Smashing the taxi to vent anger was part of a demonstration by the union and two other taxi associations representing 9,000 taxi drivers. There are about 50,000 cabbies in the city, To said. 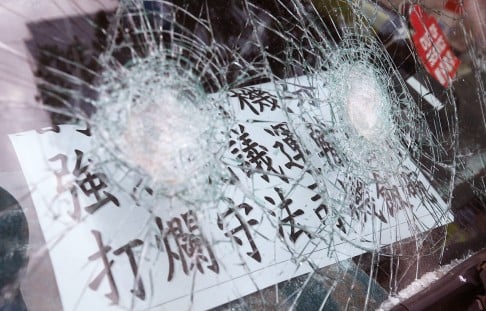 About 20 people joined the rally yesterday.

“Compared with the private cars, we are at disadvantage because we have to charge passengers according to the meters,” To said, adding that those private car drivers would sometimes give riders deep discounts.

Wu Kai-chiu, the developer of car-hailing app Call4van, which has been downloaded more than 10,000 times on Google Play, rebutted taxi drivers’ argument.

To said the government could help improve service by introducing new types of taxis and relaxing time limits in restricted areas, so cabbies could offer a direct service around the clock.

The Transport Department said anyone who used a private car for the carriage of passengers for hire or reward must obtain a hire-car permit.

Anyone who violated the regulation could be jailed for up to three months and face a fine of up to HK$5,000.