News was released yesterday on the BBC London news, that the current number of Private Hire driver licenses now stand at an all time high of 87,734. We were also informed that by Friday, this number will have risen by 650 with another 2000 in the pipeline, waiting to be processed. 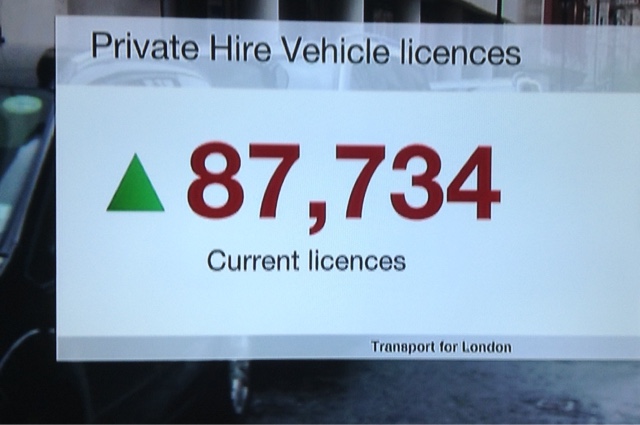 At yesterday’s compliance meeting, trade representatives were told that TfL were unaware of an increase in road traffic accidents relating to Private Hire drivers. The LTDA put out a statement last night regarding this issue, saying that drivers who have evidence of PHVs involved in RTAs should use the social media app Twitter and send details to @TfLTPH.
TfL informed trade reps that they are waiting for a decision on Addison Lee’s unauthorised Rugby World Cup raps.
“Waiting for a decision”…. from whom? (you may well ask).
Is it not TfL who are supposed to enforce PHV regulation.
Is this more bias from TPH in favour of PH or just delaying tactics till after the Rugby World Cup finishes?
TfL’s compliance said they were unsure about arrangements for the 500 pre-booked private hire cars that would be picking up from outside Old Billingsgate, at the Shine charity walk this weekend. The LTDA’s Richard Masset has requested details be sent to Taxi House as soon as possible. It should be asked, why haven’t TPH already checked the pre-bookings that should be on record?
There was some good news however, concerning the Forge rank on Cornhill.
It’s been confirmed that in the wake of the recent “hits” made by members of the Mayfair Mob, the Corporation of the City of London, has agreed to sign off an extension to the existing rank, increasing capacity from two spaces to four.
When Helen Chapman and Peter Blake were asked if (in their opinion) Uber were instant hail or pre-booked, both answered pre-booked. When informed that Uber state quite clearly they can’t be pre-booked, Helen Chapman said “it doesn’t matter what Uber say’s”
Biggest downer of the meeting came when TfL were asked if they were going to comply with the Mayor’s request for the immediate issue of temporary licenses to help the 37,000 drivers caught up in the DBS backlog. TfL replied that temporary licensing was not going to happen and that they intend to work on solving the problem.
So no change is expected there.