The Swedish national economic crimes Bureau (SNECB) is to review the activities of Uber’s latest venture.

According to the SNECB, Uber could be operating an illegal Taxi service, plus there may also be a case of tax evasion. Officers will be investigating all aspects of Uber’s businesses from several different aspects.

Both the tax agency and the Swedish Transport Agency are interested in Uber’s business model, especially Uber’s “Uberpop”, a service that uses untrained, unlicensed individuals who get paid to drive passengers.

There may well be a case that Uber are running an illegal taxi services, according to the Swedish Transport Agency, plus the tax agency raises the question of Uber’s responsibility for taxes and fees. 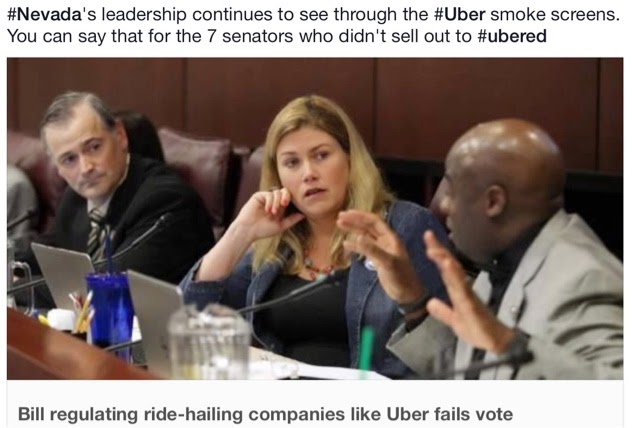 Uber hit another roadblock at the Nevada Legislature this Friday 8th May.

The Senate voted down a revised bill that would have allowed ride-sharing companies to operate in Nevada.

The amended bill was introduced Thursday after Republicans and Democrats agreed on a three percent excise tax on fares for ride-sharing companies, taxis and limos.

Just prior to the vote, everything fell apart, and the finger-pointing began.

The bill required a two-third majority vote in order to pass, and Nevada taxi companies didn’t like the idea of being subject to the tax.

Several Senate Democrats backed out at the last second after questions about the validity of revenue figures surfaced.

“Several of us have questioned that, and we have not received a reliable answer back from our fiscal division,” said state Sen. Mark Manendo, D-District 21.

“Yesterday, we were assured that passing AB175 would generate more than $90 million in new revenue, but today it appears those numbers were yet another gimmick.”

Democrats asked that the vote be tabled so more research could be done. Republicans refused, and the vote came out 13-7 in favor, with state Sen. Richard S. “Tick” Segerblom, D-District 3, absent. That’s one vote short of the 14 the bill needed.

“I think the Democrats are concerned about being promised a pig in a poke without solid numbers. Uber revenue numbers are totally pie in the sky because there’s no base upon which to base it,” said Mark Peplowski, a political science professor at College of Southern Nevada.

Some Democrats are calling for public safety concerns to be addressed by any bill allowing ride-sharing services to operate.

However, it’s amazing the ease at which public safety takes a back seat when promised $90m dollars in extra state revenue.