The State Of The Trade : by Semtex.

Personally, I think the current UCG, headed by our colleague Len Martin, are most definitely on the right track to save us. What’smore, when our friend and colleague Dizzy first launched the UCG some years back, he too was on the exact flight path to save our trade from the peril it’s in now.
Sadly for Dizzy, and with our trade being how we are, the game was ticking over not too bad, and the majority of us were too short sighted and unable to see what was happening behind the mask of TFL. As a result,  the UCG never did the massive backing it deserved.Wind the tape on fast forward two or three years, and now the penny has dropped ! London Taxi drivers in their thousands are now realising that their livings have been annihilated.  TFL and their masterful plan are all but waiting to push the corks from the bottles of Krug, reserved for when the Great London Taxi Trade are put away with the Trafalgar Square Pigeons.
And the way things are, the invites to TFL’s Taxi Trade Assassination Party, will probably already be printed.It is utterly pointless to analyse where we went wrong. To do so, would be to criticise our own colleagues and their various membership organisations who are there to prevent the above happening. Without sounding like a drama queen, our future financial livings in this industry is on critical ground now, and whatever we do in the next coming months, will no doubt decide where we go next.

So what or where next then ? I am not knowledgeable enough to have the winning formula for our trade’s survival, but neither am I naïve enough to think that sitting down or negotiating with a body who want shot of us….is futile.

I genuinely believe that nothing can be gained by sitting down with TFL. They have showed and demonstrated utter disdain and disloyalty to the service that we have expertly provided for so many years. They are not to be trusted in way, shape or form in my opinion.I know it’s not everybody’s idea that militancy is the way forward, but surely, when you have been abused, mis-treated, disrespected and rode over rough shod to the degree that TFL have done with us………..then a bite back and zero tolerance to further punishment is the answer ?

Reading the article earlier this week regarding the case of the car used in a crime with a PHV Roundel on the windscreen, had my blood boiling. That needs to be referred to Scotland Yard immediately. How many times have I predicted in the past, that sooner or later this lapse in security enforcement will see people killed ?

I have purchased several ex-police vehicles in the past, to transport my detection dogs in. As you can imagine, they are fully air conditioned, with all the appropriate cages and equipment in the back for the dogs, and can be picked up at a decent price when the police dog units invest in newer vehicles.

However, I have NEVER EVER bought one with blue lights still on, Battenberg reflective police stripes and sirens still connected ! They are all stripped out by the police before re-sale, and obviously, for very good reason ! Why then is the removal and return of a mini cab roundel not a mandatory proviso when a mini cab driver licensed by TFL, parts with his vehicle then ? Its an absolute no brainer to me, and an issue that needs urgent investigation by the police, especially the Counter Terrorist Units. Again, another hugely important lapse of care or concern, by the untrustworthy, unprofessional TFL civil servants who control and govern us.

I know, and am always saddened to see, that even at this stage in our fight for survival, our trade is still divided. 100% backing of the UCG and it’s militant stance is still not happening, and although I am naturally bias, I always wonder why. I don’t wish to name or get into arguments with various trade leaders and their membership, but what are they assuming will happen to us all ? If we don’t get out on them roads and take back what we worked four years to qualify for, how will we survive ? Is there another solution ? I would love to hear of the plan ! Honestly, I would.

The underhanded and slippery dealings with the Uber licensing has obviously dealt our trade an unexpected and unfair blow. I could easily undercut most dentists on price in any UK town, if I decided to open up shop with no university academic qualifications, no dental college training and no expensive hospital machinery. Check this office for dental implants, that provide the best dental results, using modern machinery, all within budget.

Avoiding my income tax, and using just pliers, unsterile  needles and a head torch, I could make a killing in the dentistry game, by simply avoiding to work under the required professional standards. But, would I get away with it ? Of course not! dentists around the country would be up in arms demanding for me to be closed down immediately. And I would be, quite rightly. And yet………………the murky, distrustful and woefully inadequate untrusted of Transport For London, not only allow a similar gang as my fictional dentist to trade in the first place, but bend over backwards and ensure that the pathway ahead is clear for them to both succeed and establish themselves ! Isn’t that truly unbelievable ? It sounds quite dubious doesn’t it ? You bet it does ! Its as murky as hell !If that were to happen to the rogue dentist, how many PROPER dentists, who have been forced to comply with the latest legislation, been forced to invest in the proper hygienic equipment, been forced to take the appropriate university degrees, been forced to go through the demanding and professional six year training, and forced to operate in the appropriate premises……………………….would congregate outside Parliament, screaming the place down ?
Yes, you’re right ! Thousands and thousands of them !! And so they should do too !! The dentists who take care of us, can thank their lucky stars that it is The British Dental Association who look out for their profession, and not TFL !

Last week’s call from the UCG achieved a record number of our colleagues attending. I don’t know why all of our trade organisations, clubs and unions didn’t officially support it, but I know that members from all of them, responded to Len Martin’s shout for action and unity.
It was good to see, and it was humbling, proud and emotional.

I certainly don’t know the answers to either our current situation or our place in London for the future.

I am a big lump, but I had tears coming down my face as I stood up there last week. I have always been proud to be a London Taxi Driver. It took me four years to the day to earn my coveted green badge. I didn’t find it easy neither, and struggled as many of my colleagues did, along the long road to achievement. I have achieved much during my life time, but count the gaining of my Green Badge to be among my proudest endeavours of my life.

Last week, I wasn’t quite sure if my tears were because I was witnessing the very end of our magnificent and Iconic earned place in London, or whether it was just the start of a last minute, passion fired come back, to regain the rights and privilege to operate and ply our trade, granted to us by The Protector, Oliver Cromwell, all those years ago.

God willing, it was the latter.

It should be blatantly apparent to everyone in our trade by now, that the men who were sent to kill us are doing ok.

Negotiating, talking, doing deals and constant blah, blah, blah, must surely be a stalling tactic now and refused with the contempt that it is offered in.

We as a trade are really on our last legs now. Len Martin’s call last week witnessed first hand what this trade can do when pushed to the edge. Whenever Len puts the call out for support, we could do a lot worse than back him up.London Taxi Drivers are feeling TFL’s woeful contempt of us via our pockets and bank accounts now.

But what we are frightened of, is a woefully inadequate governing authority, who for some reason that will eventually be revealed, have maliciously and deliberately failed to create a fair and honest platform. We as London Taxi Drivers have adhered rigorously to strict professional standards, effective and thorough CRB character checking, encyclopeadia standard  topographical knowledge, specialist and hospital medical and fitness attainment, a fully wheelchair and disability functional and compliant vehicle, a sealed and tested fraud proof tariff meter approved by Government, and a closely monitored exemplary character of honesty and integrity check.

And it is for that reason, that we are financially unable but furthermore, unwilling, to lower our world famous platinum standards of iconic professionalism…………..to become like the aforementioned rogue dentist, just to offer a cut price bargain.

The public wouldn’t dream of visiting our unqualified dentist character would they ? But when the vodka and tequila get deep into the bloodstream late on Friday nights in Central London, the offer of a cheap ride by an unqualified imposter, is too good to resist !
That is of course, until you wake up in the rape suite of the Metropolitan Police and Officers from Operation Sapphire, waiting to interview you. Your unqualified bargain lift home, wasn’t what you thought it was…….was it ?We are without doubt, a Taxi Service that all other countries across the world attempt to emulate. Our standards of professionalism and expertise are not a coincidence, neither a case of good luck. They have been achieved as a result of a long winded, drawn out rigorously tested process, which only the best candidates and the squeakiest of cleanest, get through. When a person emerges metamorphous  like from taking part on the world famous knowledge, to a professional London Taxi Driver, a massive evaluation of both his or her character and professional skills, have been evaluated.

The traitors of Transport For London of course, have not the slightest emotion of this proud achievement. They have systematically allowed a magnificent iconic service, to have to come begging by demonstration, to bring our genuine case of woeful treatment, to the public, who we have loyally and steadfastly served so well, for over 300 years.

This is our last chance colleagues. When the UCG’s Len Martin puts the call out again for support, bear in mind what I have written above. We have been knocked about with disrespect by this bullying lot of double standard traitors for too long now. Either we fight for what we are professionally licensed for…..or we lose out to the dodgy dentist !

It s our choice. I suggest we all await the call from Len, and lace the boots up again ! 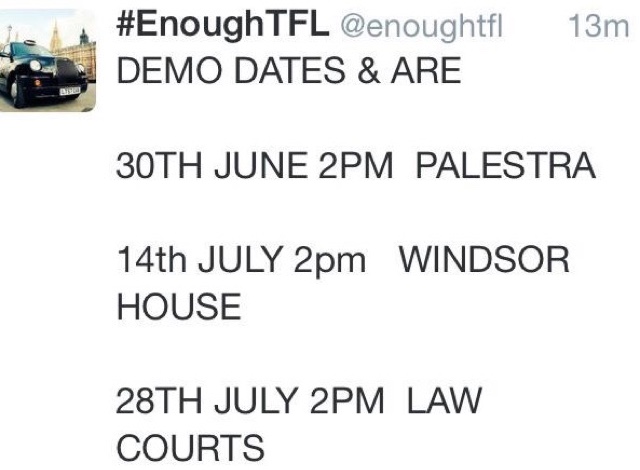