The Mayfair Mob : Licensed Taxi Drivers, Clawing Back Work From The Touts And Reclaiming Ranks… By Jim Thomas. Most drivers will now be aware of the fantastic work being carried out, by a band of night drivers calling themselves the Mayfair Mob. These courageous drivers are tackling the war on touts, one battle at a time….and this is proving to be highly successful.

It’s also extremely welcome to see certain trade representatives openly promoting the actions this group in Taxi trade media.
Extending the use of the AdVan, has been a major factor in our success. 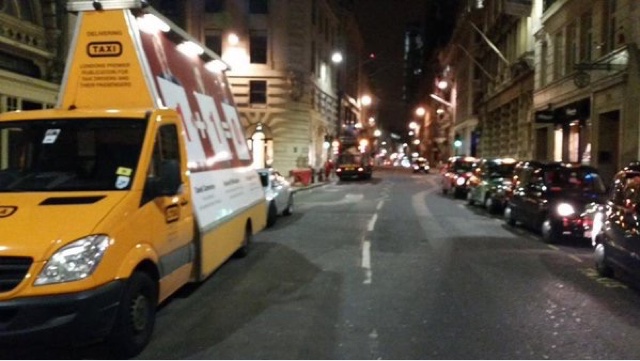 LTDA AdVan helping out at Forge
After the success of the marshals at Novikov’s and Forge, there is now a campaign in the LTDA Taxi paper actively recruiting marshals.
This is a positive step forward and hopefully a step on the ladder to rid our trade of the tribalism (my orgs better than your org) that has held us back for so many years. The work carried out by the Mayfair Mob, utilises members from all trade bodies (Brothers In Arms).
In the space of just a few short months, the Mayfair Mob has acquired two completely new night ranks, previously believed to be unobtainabl. 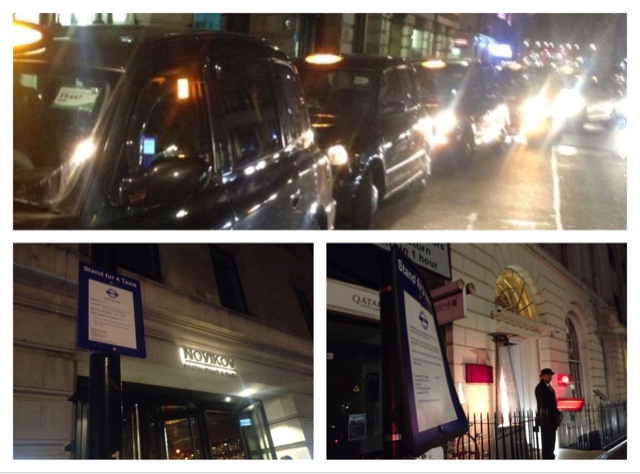 With the rank boards firmly in place, we now wait for Westminster council to put down road markings, which should make it easier to keep the space clear for working Taxis.
Some non believers think it can’t be done, as the two ranks in question are only live at certain times of the day. Well if they can sort this problem out in at Benedick’s wine bar in Belfast, using the same method, it can also be sorted out in Mayfair.
See solution below. 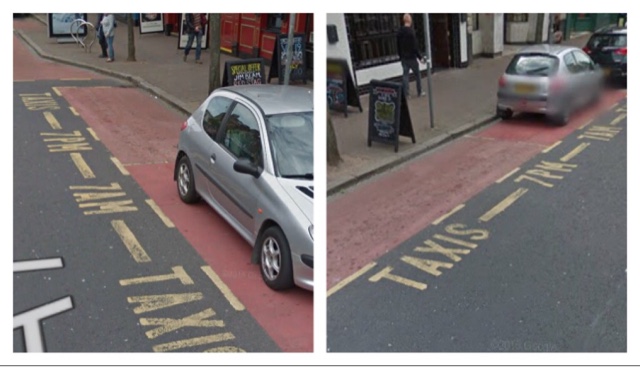 Another major achievement has been the extension to the rank in Cornhill, outside the night venue Forge. Again thought to be impossible. 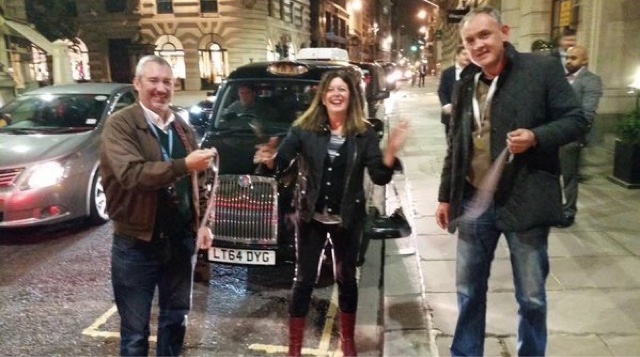 Cutting the ribbon on the new Forge Rank extension, now known by Mob members as “The Benidorm Rank”.
Through the medium of social media platforms such as Twitter and FaceBook, the group regularly put out updates as to the current status of Mayfair and City ranks. We are now seeing more drivers joint our ranks, as the touts appear to be receding. Club owners are happy to see the pimps and pushers outside their premises diminishing, although door staff are feeling a huge dent in their nightly backhanders.
The Mob utilise the members only account (@UCGup). This system insures the touts are unaware as to where the work is building up and where “the Mob” will hit next.
A few years ago, Westminster City Council carried out a survey on night venue patrons. It showed beyond a shadow of a doubt, revellers leaving venues will use the first service they see when leaving night venues, whether that vehicle be licensed or not. They regard the fact that door staff have put them in a vehicle, as a sign of authenticity. This is why it’s so important we put vacant Taxis outside venue exits.
Many drivers are saying that night-work hasn’t been as bad as had been anticipated at the beginning of the year, this is a direct result of the amount of work being clawed back from the touts by Mob members on the front line, outside the night venues.
The Mayfair Mob will shortly be expanding their list of achievements and are actively encouraging councils to look at putting licensed Taxi ranks outside every licensed venue.
COMMENT FROM SEMTEX:
Without doubt, the Magnificent Mayfair Mob are the pride of the London Cab Trade !
Their hit rate and success ratio are phenomenal when you consider how much progress has been made using a relatively small manpower deployment.
Their success has been no surprise to me. Their effectiveness and strength are powerful for a variety of reasons.
Firstly, and of major importance, is that the members of the Mob are PASSIONATE. Without passion, they could never achieve their objective.
But not only that, they are hugely successful because they remain and operate as a small specialist unit.

In my opinion for what it’s worth, to grow big, have AGM’S, meetings, management boards with offices etc, would dilute their potent killer sting overnight.

Too many people with too much to say would see them become just another Org. I understand that they have a competent and nominated leader who calls the shots, and that it how it should be.

They are operating perfectly for my money. A small unit, fussy and choosy who join, using secretive and covert intelligence. No blah, blah, blah, chat chat chat shall we shan’t we………..just target, deploy and hit !

Would could be simpler ? What could be more effective ?

There are several similar units in the world that spring to my mind, who have had a long, successful and devastating record. I wont mention them on this post for obvious reasons, but have had resounding success using the Mayfair Mob’s basic rules of counter deployment.

Stay small folks, stay strong, stay effective and be lucky. Thanks for what you are doing for myself and others in our trade, who will benefit off the back of such committed and passionate colleagues. I am told that nightwork is already improving on certain venues of the West End.

The Mayfair Mob. The pride of our cab trade.