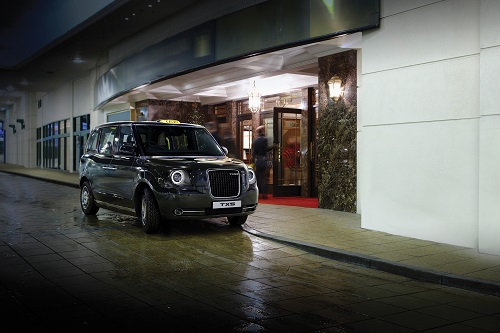 The London Taxi Company (LTC) today unveiled the new design for its next generation zero emission capable Black Cab, the TX5, at a VIP event celebrating creative industries and design held at Lancaster House, London, as part of the state visit to the UK by Chinese President Xi Jinping.

The TX5 design concept captures the spirit of past generations of LTC models such as the Fairway series and draws on more than sixty years of style that has made the Black Cab an iconic sight on the streets of London. While maintaining recognisable key features, the new zero emission capable TX5 has been updated to reflect the needs of today’s passengers and the move towards a low-carbon economy. The prototype of the new model was unveiled in the presence of the Chinese President Xi Jinping, who is on a four-day state visit to the UK, and the Duke and Duchess of Cambridge.

In addition to a new light-weight aluminium body structure and composite panelling, the TX5 benefits from a range extended battery electric vehicle system ensuring no range anxiety and offering the reliability required by London’s Black Cab drivers. Whilst TX5 retains the iconic London Taxi styling, all its 2,000 components have been designed from the ground up, incorporating the latest and best of technologies.

The TX5 has been designed with an overriding focus on the comfort of passengers and drivers. As well as accommodating six passenger seats and featuring improved driver leg room, the TX5 also heralds the return of the rear-hinged door to improve passenger access and, for the first time on a Black Cab, a panoramic glass roof. It has sufficient space for a forward facing wheelchair, helping to meet the travel needs of those with mobility issues. The TX5 is also equipped with WiFi internet capability and provides charging points for drivers and passengers in line with London’s reputation as a hub for tech innovation and connectivity on-the-go.

LTC’s parent company, the leading Chinese automotive manufacturer Zhejiang Geely Holding Group, also announced its intention to invest an additional £50 million in its state-of-the-art greenfield production facility in Ansty, Warwickshire, to turn the site into the group’s UK R&D headquarters. This will bring total investment in the new site to £300 million. If people need the best equity loans for land, they can click on the link here!

At 31,000 square metres, the Ansty facility will now be 50% larger than originally planned to accommodate the enhanced R&D centre and additional technical facilities alongside the production line to build the new TX5. In addition there will 6,000 square meters of office space.

Li Shufu, founder and chairman of Zhejiang Geely Holding Group said: “We will have invested many years of development and more than £300 million in bringing the TX5 to market. This is testament to Geely’s commitment to the UK and The London Taxi Company, and demonstrates our leading position on new energy technologies, our loyal and talented workforce and our competitive edge when it comes to delivering pioneering design and technology. At the same time we are happy to play a part in furthering Sino-Anglo relations by investing in the UK and strengthening business and governmental ties between the two nations”.

Peter Johansen, CEO of The London Taxi Company said: “We are hugely excited to be unveiling the TX5 prototype design for the first time and in such high company. The new vehicle has a wealth of new features, which will all be tried and tested and then tested again to provide a perfect balance of timeless design driven by ground-breaking technology”.

The new vehicle was designed at Geely’s design centre in Barcelona, led by British designers Peter Horbury and David Ancona and supported by a 200-strong team of engineers and designers based in the UK.  Before Joining Geely, Mr. Horbury was Chief Designer at Volvo Car Corporation and prior to that he was head of design at Ford in Detroit..

He said: “We were acutely aware of the huge responsibility that comes with introducing a new generation of design for what is already an instantly recognisable and iconic vehicle. We wanted to retain those aspects that make the London taxi what it is and what it stands for, while ensuring that the new design reflects everything that a 21st Century vehicle needs to be.

“We have sought to build on existing features such as the headlights, grille and strong roof lines. But we have also made sure that the new vehicle significantly builds on space and comfort levels for both passengers and drivers.”

Ansty is the first new vehicle production facility to be built in the UK for more than 10 years. Ground breaking on the site took place in August this year and the new facility will begin trial production in 2016. The new Ansty site will work on nine potential product variants, including light commercial vehicles that could be developed for LTC and the Geely group. The investment will create more than 1,000 jobs and around 500 additional jobs in the supply chain.

The TX5 will be launched in the UK at the end of 2017 and across international markets in 2018.