I recently had a tea break with a driver who told me a very worrying story. His cab had been broken into after thieves had smashed the side window and stole a few bits and pieces from the front compartment. Unfortunately, amongst their haul, they took his green badge. 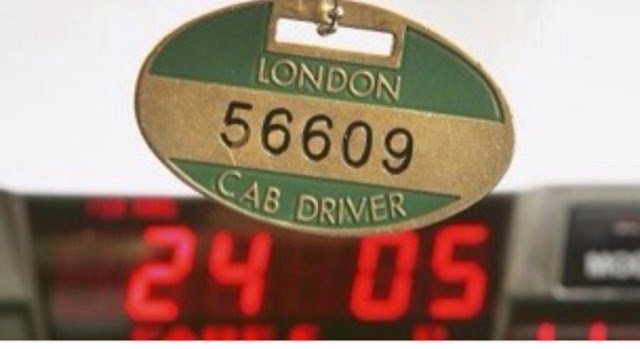 He immediately reported the theft to his local police station, then contacted TfL, who sent him a cover note in the post. To his surprise, he was told not only to send back his two paper licenses, but also to return both identifiers before new ones could be dispatched.
Having seen some harrowing tweets on Twitter, my friend was extremely worried about the abuse he would get from other drivers if he works without ID’s
He asked if he could hold on to the identifiers until the new ones arrived, but he recieved a definite no.

Again this is double standards from TfL who seem to be in a situation where one hand doesn’t know what the other is doing.
Just a short time ago, we were all sent new IDs through the post and asked to dispose of the old ones ourselves. What’s changed in the short time since then?
Do TfL really not trust this driver to destroy the old ID’s once in receipt of new items?
Surely, a dishonest driver would have claimed the ID badges stolen at the same time as his green badge and later, sold them on with no fear of a comeback.
The driver concerned is now breaking the law, having photocopied his IDs which he intends to display till he receives new ones.
TfL, A System Not Fit For Purpose:
Drivers should be able to attend Palestra and issued with new documents, over the counter. Badges/Bills should never be sent through the post.
In June 2014, we were promised a new building with counter services in Faith Lawson house, Dacre street, just behind New Scotland Yard (albeit that there was no casual parking facilities in the area).
>Link<
But by October, news emerged that TfL were going to sell off the building instead.
>Link<
In a recent radio interview, ex Director of LTPH John Mason stated that TfL had disposed of counter services, as the staff at Palestra, couldn’t be trusted to handle cash. In fact one employee was convicted for pocketing licence fees paid over the counter.
>Link<
Other I ncidents that over the years, have never been fully explained.
Taxi crash at Victoria:
Driver ran off, elderly American passengers had to be cut from the wreck and taken to hospital. Later transpired his bill was a fake.
Missing bills:
Over 200 blank Taxi driver licenses went missing in the move from Penton Street to Palestra. Reports that Bills were being sold in an East End Taxi garage, was never investigated or explained. Total silence from TfL.
Private Hire Roundels sold for cash:
Batches of new PH vehicle licenses from SGS were found in an envelope at a West London minicab office. No one was charged, no investigation and again, total silence from TfL.
Counterfeit operation:
Reports of an operation, set up in the basement of a pub in SW London, where metal badges, driver Bills and IDs were being produced. Nothing came of this report. Again, silence from TfL.
Woefully inadequate or utterly corrupt ?
Source: TaxiLeaks