TfL Statement : Card Payments To Be Accepted By Every Black Cab.

Travelling in one of London’s iconic black cabs is about to become even easier. Today (3 February) it was confirmed that every London taxi will be required to accept card payments for their fares by October this year. The move was approved by the Board of Transport for London (TfL) following a consultation in which an overwhelming 86 per cent of respondents backed the move.

Cash has always been the standard method of payment in London’s 22,500 licensed taxis but around half of all cab drivers now accept card payments. By requiring cards to be accepted in all black cabs, taking a cab will be even easier for Londoners and visitors.

The Mayor of London, Boris Johnson MP, said: “It’s great news that with a quick swipe of a card, millions of passengers will be able to pay for their journeys in London’s iconic black cabs. It’s an essential part of modern life and it’ll make paying for your journey swifter and simpler than ever before.”

Garrett Emmerson, TfL’s Chief Operating Officer for Surface Transport, said: “We believe the acceptance of card and contactless payments will be a huge plus for both taxi drivers and their passengers. Card payments are part of everyday life in London, and people use them in every aspect of their lives. The TfL network is seeing more and more contactless payments so this would bring the taxi trade into line with other transport services in the Capital. It means that customers no longer have to check whether they have cash for a journey beforehand and will open up taxis to potential new customers.”

TfL has also committed to working with the card industry to link card payment devices directly to the taximeter in future.

Today’s TfL release was tweeted by the LTDA, but it looks like they haven’t read it! 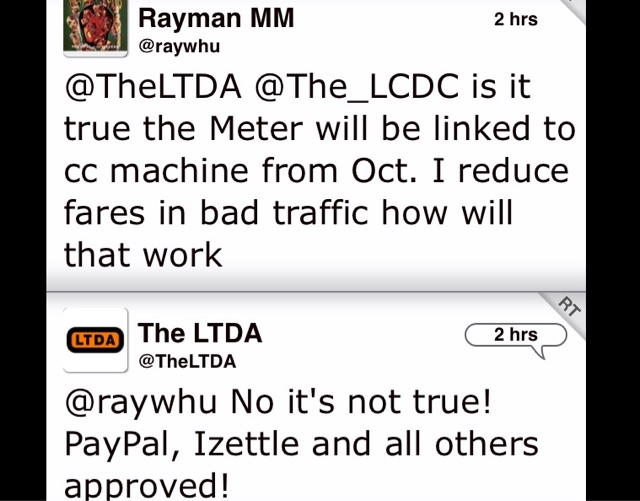 Richard Koch, Head of Policy at The UK Cards Association, said: “Consumers are increasingly choosing to pay with cards as a convenient and secure alternative to cash. It’s great news for Londoners, and visitors to the Capital, that they’ll always have the option of using a debit or credit card in taxis now too. With one in ten card transactions now contactless, many passengers will also welcome the ability simply to touch and pay for their cab journey.”