Existing New Routemasters will be allowed to enter the ULEZ despite not meeting new emissions standards. 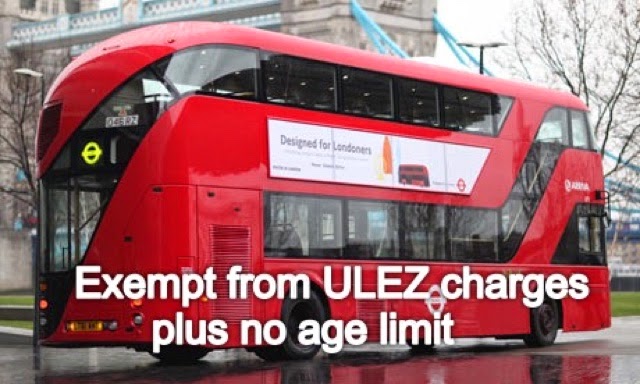 Transport for London is currently consulting on proposals to require vehicles driving in central London to comply with new European emission standards limiting nitrogen dioxide (NO2) and CO2 emissions, or face a daily fine.

The planned Ultra Low Emission Zone (ULEZ) will operate 24/7 and transport bosses hope the threat of fines will encourage the take-up of greener vehicles and help cut the 4,300 premature deaths each year estimated to be caused by poor air quality.

However while private car owners and commercial fleet operators will either have to replace their vehicles or face fines of up to £100 per day, TfL is exempting its flagship New Routemaster from the zone’s cleaner emission standards.

Existing New Routemaster buses are fitted with Euro V engines but TfL says they’ll still be allowed to drive in central London despite mandating Euro VI for all other buses, coaches and HGVs entering the zone.

However it says they’ll still be allowed to operate in the ULEZ because they “have NOx emissions much closer to the Euro VI standard (a reduction of 80 per cent on Euro V)”.

Liberal Democrat AM Stephen Knight has criticised that decision, saying: “Allowing TfL vehicles to have lower pollution standards than other private vehicles entering the proposed ULEZ is indefensible when the Mayor has known about these plans for over a year now.

“His attempt to defend this double standard is largely the price of his irrational obsession with the incredibly expensive new routemaster bus, when his first priority should be to protect the health of Londoners.”

The Green Party’s Darren Johnson added: “All the new buses going onto London’s roads since the summer are less polluting than the Euro V Boris Buses.

“Instead of the Mayor investing in the cleanest forms of technology, such as electric buses, Londoners are being landed with a legacy of polluting vehicles which are due to be operating for nearly a decade after the Ultra Low Emission Zone has eliminated many of the worse vehicles from our roads.”