TfL To Drop Requirement For Private Hire Operator To Have A LandLine. Ignoring Consultation Result 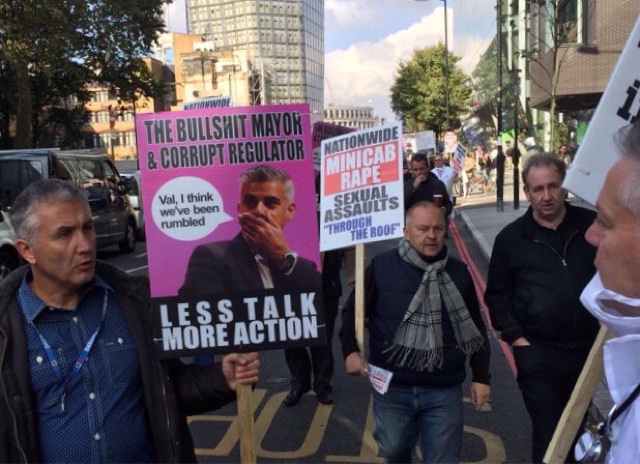 After reading be latest diatribe spewed out from Blackfriars, I’m truly beginning to think we a stuck in 1984, or living in North Korea.
For 4 1/2 years TfL have continued with a light fingered approach and ignored, Uber’s reluctance to conform to regulations set down by acts of Parliament in a number of Hackney Carriage acts, Cab Orders and the PHV act 1998.
Number one on the long list of noncompliance must be the failure to insure their drivers were fully insured, closely followed by them never having an accessible landline for pre bookings and customer contact (a requirement for licensing as a PH operator and covered by the PHV act 1998)
Let’s not forget the jaw dropping saga, as Managing Director of Surface Transport Leon Daniels explained to a benign GLA Transport committee, all about a mythical on off insurance policy (which according to the Association of British insurers never existed in the first place).
This lead on to more lies about Uber’s landline which when asked by GLA members to supply, he said ‘haven’t got it to hand right now’, then on a subsequent occasion,  supplied the private number of Uber’s director of operations, saying it was the illusive pre booking line.
When pointed out who was at the end of the line, Daniels added ‘it wasn’t mentioned in the act that the landline had to be a permanency’. Much concern has been shown over this issue, so TfL in their infinite wisdom, held a consultation.
Now we find in light of the consultation, even though the majority voted to keep the landline requirement, TfL have decided to drop it, saying they feel the consultation could have been filled out by aggrieved Taxi drivers.

Meanwhile we’ve had to watch PH applicants licensed with fake medicals, fake topographic test passes, not being in possession of Hire and Reward insurance.
While we’ve been harassed for over ranking, we’ve seen compliance walk by PHV’s openly plying for hire, sometimes sitting on licensed Taxi ranks….and while all this has been going on, Licensed Taxi regulations have been updated and will be vigorously enforced by a new army of compliance, no prisoners will be taken.
We’ve been told:
•You will take CC
•You will take contactless payments
•You will absorb transaction and incidental charges
•You will gave a paper, printed receipt
•You will remove all previous stickers
•You will replace with TfL authorised stickers
•You will buy a Purpose built electric Taxi vehicle
The list seems to be never ending.
If all this wasn’t ridiculous enough, we come to yesterday’s unbelievable edit from TfLTPH, who now informs us
You cannot refuse Scottish notes 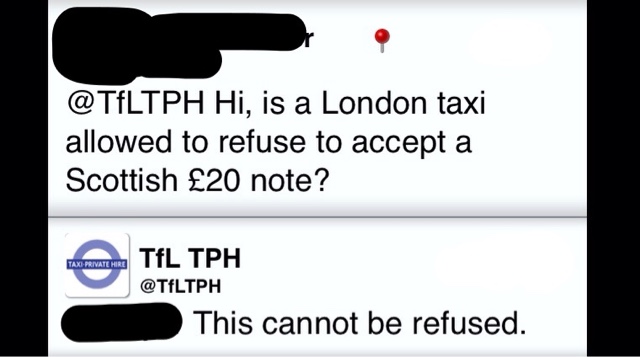 News to the Bank of England’s banking code on legal tender.
Can you see the pattern unfolding here?
As Taxi regulation are aggressively tightened up, private hire regulation has being relaxed. And where legislation seemed to be solid, TfL top officers have coached Uber on how to circumnavigate you regulations.
So why do we find ourselves in this uncomfortable position?
Uber’s licence runs out in the spring of next year. TfL and the Mayor office are reluctant to take any action that may halt issue of a Uber’s renewal. So any action against uber will be postponed until after they are relicensed.
UPDATE ON PARTITION WINDOW STICKER!
TfL say if you have head rests on the passenger compartment side of your partition window, then the CC sticker must go on the seat back……you really couldn’t make this crap up…. 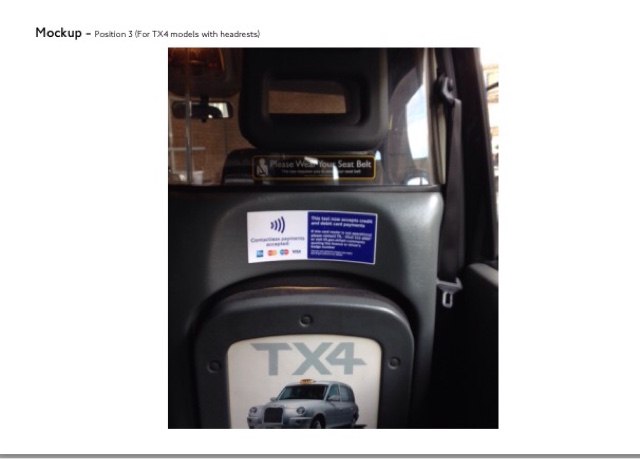 You will probably need a boxful of these stickers as they don’t stick very well to the plastic which is not a smooth surface and will peel off very easily. If a passenger removes, you won’t see it until you make a concerted effort to observe.
Top caption shouldn’t read Mockup….it should read Mockery.
Question: Who gives these people jobs?
Ask yourself: Would Uber stand for this?
AND NOW, JUST WHEN YOU WERE THINKING
“COULD IT GET ANY WORSE?”
TOTALLY FAILING LONDON BRING YOU:- 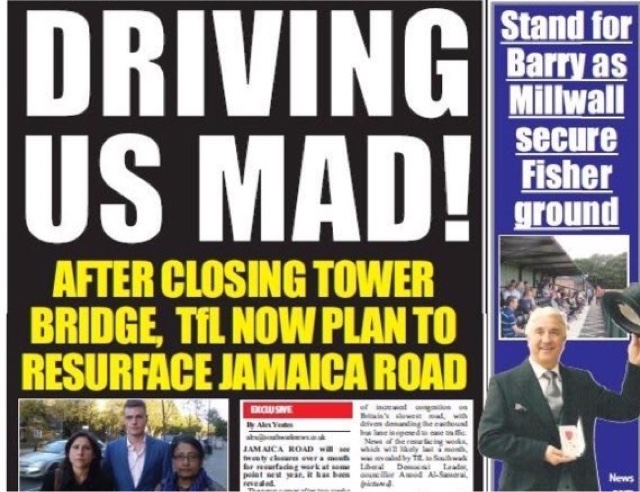