Freedom of information searches have shown that the main reason TfL and the Met have not been pursuing legality when it comes to pedicabs, is the matter of cost. Apparently, the do nothing/costs nothing option, is their current choice.
Over the last year many motorised Pedicabs have appeared. Easy to spot by the way the rider doesn’t peddle. The police say they are hard to find, (true I suppose if you walked about with your eyes closed). 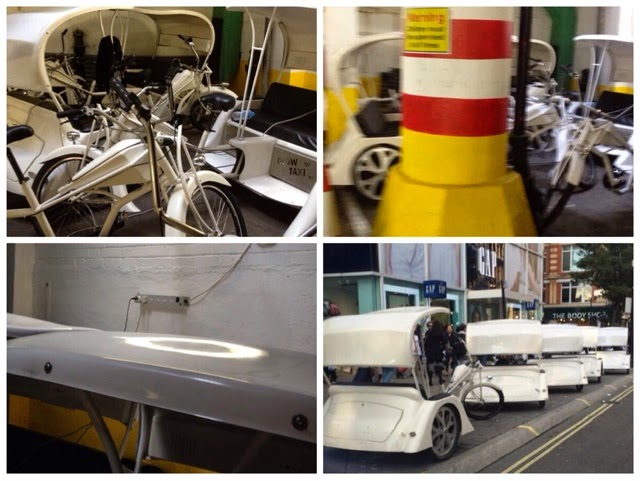 We have managed to find where these unlicensed motorised vehicle are stored, recharged and hire out, something the Met has been unable or hasn’t bothered to do.
Below is an excerpt forwarded to the Law Commission by The Met Police:
Safety problems partly derive from the fact that there are no set standards for the construction and use of the pedicab and no set standards for the vetting of operators or riders to check they are suitable.
Many pedicabs fail to have working brakes, lighting or seat belts and the high turnover of employees limits the long-term effects of enforcement.
Common unlawful behaviour includes contravention of one-way streets; riding on the footway; blocking the pavement; parking in bus lanes or on pedestrian crossings, and disobeying red lights.
Blocking of bus lanes is particularly problematic, resulting in delays and disruption to planned bus services through what are generally already busy parts of the town centres in which they operate. Obstruction is also a major issue.

TfL have also provided a number of statistics relating to criminal offences and pedicabs in London, where they are perceived to pose a particular problem.
Statistics from the TfL report include:
Serious sexual assaults by pedicab drivers;
From April 2009 to January 2014, 7 sexual offences have been attributed to pedicabs drivers. (They kept that one quiet!)
A number of thefts and robberies have reportedly been perpetrated by drivers;
There were more than 650 incidents reported in 2013 alone, and twenty injury collisions involving the personal injury lawyer assistance were recorded over the three year period to March 2013.
But…Nothing about the illegal use of motorised rickshaw bikes. Why?
Surely Public Safety Should Come Before Cost?
There are substantial enforcement costs:
From 2010 to January 2014, TfL funded or part funded over 160 operations against pedicabs, at the cost of almost £65,000, resulting in 389 arrests being made by the Metropolitan Police. That’s just 3.74 arrests a week, at a cost of £167 per arrest.
We would assume TfL’s compliance or cab enforcement are not involved in this, as their record on illegal plying for hire and satellite office touting by minicabs is significantly below this.
As for the Metropolitan Police Service, the cost of a targeted operation to deal with pedicabs is currently approximately £1,500 each.
Processing a case is highly time consuming:
Initial arrest and process takes approximately 4-6 hours to the Metropolitan Police Service.
Significant time is spent dealing with the criminal justice system and the administration for the restoration of the seized pedicabs.
So The Met and TfL both know what’s going on, they just don’t know what to do about it.
Cost Benefit Analysis And Summation By Law Commission.
(You couldn’t make this up)
This impact assessment identifies both monetised and non-monetised impacts of intervention, with the aim of understanding the overall impact on society and the wider environment. The costs and benefits of each option are measured against the “do nothing” option.
Impact assessments place a strong emphasis on valuing the costs and benefits in monetary terms (including estimating the value of goods and services that are not traded).
However there are important aspects that cannot sensibly be monetised. These might include impacts on equality, either positive or negative, or enhanced (or diminished) public confidence.
The impact assessment process requires that we make an assessment of the quantifiable costs and benefits even when there is insufficient material on which to base those calculations.
Where possible we have spoken to practitioners to inform our view of the likely aspects to be affected by the change in policy and have used this as the basis for our calculations. Where it has not been possible to obtain a rough indication of numbers in this way we have had to make a realistic estimate.
In such cases, we have taken a conservative approach and have tended to use figures that we considered likely to under-estimate benefits and over-estimate costs
So where they have been unable to acquire true facts and figures….they’ve made them up.
Editorial Conclusion:
Stand by to recieve a recommendation from the Law Commission to licence Rickshaw (Pedicab) vehicles.
TfL would probably issue temporary permits to the riders as well, as a way of raising revenue.
It’s already been alleged that Westminster Council have Traffic Management Orders (TMOs) in place to implement ranks for these bikes, with an eye on selling permits to riders as soon as the recommendations are approved.
So, Licensed Taxi Rank approval = couple of years
Licence Variation for satellite office = just a few weeks
Pedicab Rank = just a few days.