If You Have Tears, Prepare To Shed Them Now …………..by Semtex. 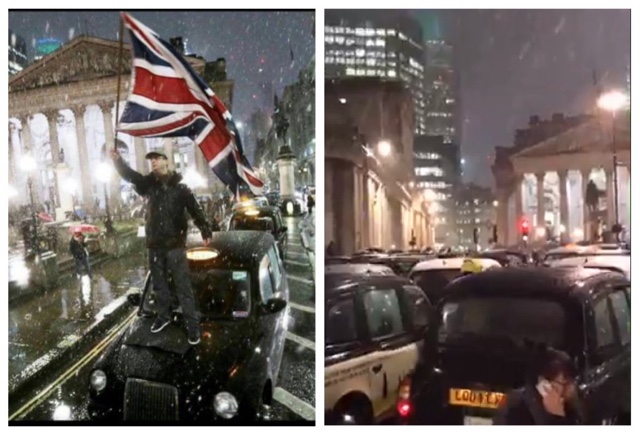 Not my own words, but the words of Shakespeare’s Julius Caesar, Act 3 Scene 2.

Those words could just as well been my own, last night at the Bank Junction.

Whether a fan of the legendary Bard or not, you will not need me to outline the act of Betrayal in the story of Julius Caesar. As the betrayed Caesar lay dead with a dagger in his heart, Mark Antony quoted the above, If You Have Tears…………….

The UCG’s hit at The Bank on Thursday afternoon, could not possibly have taken place in worse weather. It was freezing cold, with snow, hail and absolutely unforgiving rain.

I have been working with an Irish Garda Search & Rescue Dog Team on the windswept Dartmoor for the last week, and I have another two weeks to go. Nevertheless, my heart and passion in the London Cab Trade is always foremost, and I made the three hour journey up to London, from Plymouth.

Difficult, expensive and thwart with industrial action as the journey was, I wouldn’t have missed standing back to back with my colleagues for anything.

Getting off the tube at Liverpool Street around 1615, I began the short walk to the Bank, cutting across London Wall and along Old Broad Street.

Looking at my watch, my attention was drawn to the cabs picking up on London Wall with less than an hour to go. Not the end of the world, I thought. There’s still a while yet, and probably plenty of time to support the call.

Sheltering from the extreme weather, I stood on the top step of The Royal Exchange, monitoring the rapidly growing gathering about 100 meters in front of me.

The Police Commander and Met’s Liaison Team were already in place, carefully observing the situation and the rapidly expanding black cab presence. With 15 minutes to go till the official demo start, cabs were now commanding every road and street to the Bank Junction, horns blaring and flags waving. By 1700, the UCG’s request for back up had been answered and I witnessed members of every Trade Org we have, loyally mustering for duty, in a display of respectable strength and unity.

It was very frustrating watching our trade gather to this venue on such a dreadfully rain battered evening. Sod’s Law, there were people wanting cabs everywhere. Had it not been a demo, our colleagues would have earned some well needed coin, but considering the importance of the UCG’s request, our unity had to be seen as potent.

And potent it was. By 1730 the whole area was in lockdown, as the Police Gold Commander professionally observed and allowed our trade to voice it’s disenchantment.

The driving rain and freezing conditions showed no mercy and it continued to beat down unmercifully. At around 1800, I shook hands and congratulated the UCG’s Trevor Merrills who, like everyone else there, was soaked to the skin.

My schedule was extremely tight for getting back to Dartmoor. I gave our youngest son a call who works in the City, to quickly grab a coffee with him, before heading off for my train. I told him not to attempt to drive down for obvious reasons, and arranged to meet him at the junction of St. John’s Street and Clerkenwell Road.

The demo was still in full pelt as I crept away, and despite the weather, decided to tab up to the rendezvous with my son, shaking hands with a few of our trade before I left.

It was freezing, it was dark, it was wet, but I was well wrapped up, and not made of sugar…………and felt a lovely warm glow inside.

Walking back down Old Broad Street, the road was obviously gridlocked, as was West bound London Wall.

However, as I walked through Finsbury Circus and over Moorgate, I felt as though I had been punched in the head. There were cabs with yellow lights on, blue lights of POB and cabs waiting outside buildings with name boards in. Not just one or two, but dozens and dozens of them.

By the time I reached Clerkenwell Road, it looked every inch business as usual. Yellow lights, blue lights, name boards and cabs plying.

All this as their colleagues were going skint fighting for our very trade’s survival not two miles away.

By the time I got to my boy, I was absolutely fuming. Fuming because of what I had just seen. Fuming because in all honesty, I felt a complete prick. All that way, seven hours travelling, £145 worth of fares, a day missed training my dogs, and for what ? To meet up once again, like I have done for over twenty years, in the pissing rain, freezing weather and witnessing the same two or three hundred faces, that bend over backwards to fight the good fight, in hope that we have something to fight for at the end of it. As hundreds more of ‘our own’ have an absolute field day bonanza on the back of it !

At first, my son thought it was funny, before realising how angry I was. “Calm down, Dad ! You will make yourself ill again over this. I said to Mum you were mad coming all this way !”

And of course, he was right. I will make myself ill over it and I was mad travelling all that way.

We had a coffee together, and to be honest, I cant even remember drinking it. I was so pissed off. My son drove me to catch my train and I gave him a hug as he waved me off.

As he did so, and all the way up to the station, yellow lights and our very own Roman Republican Senators, earning their money, whilst their very own Brothers and Sisters were earning nothing, soaked through to the skin at the Bank, in a brave attempt to fend off our attack, and imminent demise.

Melodramatic maybe, but I had a brief insight of how old Julius must have felt as Marcus Brutus stuck the blade in him. Betrayed by his own, and murdered.

My fate and that of my Brothers in Arms at The Bank was thankfully not as sinister as that of the Roman Emperor, but just as brutal and equally as hurtful, I wager.

What with the industrial action, inclement weather and everything else to hinder my journey back to Princetown in Dartmoor, I eventually got back to my hotel where my wife was waiting for me at just before midnight.

She knew instinctively that I was upset, and no doubt had her card marked by our son in London so deliberately body swerved any further conversation.

It wasn’t just the odd rogue cab driver, it was hundreds of them betraying their mates at the Bank, fighting for the trade’s survival and going skint in the process.

For many years I have been proud of rallying the troops via my writings as a trade scribe. But something had been knocked out of my heart walking from the Bank to Clerkenwell Road last night.

It was heart breaking to see so many of our colleagues joining the call, waving flags and doing their level best to support and fight our precarious futures, only to be taken advantage of by the two bob, betraying Judas’s.

I realise of course that we all have financial restraints, we all need the money and we can all do without attending demos  on a wet, freezing cold Thursday night in winter.

But despite that, and even if they didn’t agree with the demo, couldn’t those drivers park up somewhere or stay at home in quiet solidarity, just for the short period of the trade’s action ?

Coming out and cleaning up like that was reminiscent of watching a David Attenborough documentary. It was so disrespectful and lamentable.

Well, our trade is out again at the Bank soon. I will be back from Dartmoor by then, so taking into account of what I said above, will I be there ? You bet your life I will ! And I guarantee that the same 300 trade fighting colleagues will also be there, just as we always have been, and always will, each and every time we need to be.

To those staunch lovely people and passionate proud London Cab Drivers, I will see you again in the trenches. Fighting for survival, fighting for a fairer trade and fighting for tomorrow.

To the other two bob band of Marcus Junius Brutus’s…………………thanks for your apathy and ungentlemanly felony.

I hope you reap what you sow.

“For Brutus, as you know, was Caesar’s angel. The Gods know how dearly Caesar loved him ! This was the most unkind cut of all. For when the noble Caesar saw him stab, he understood his beloved Brutus’s ingratitude. It was stronger than the violence of traitors, and it defeated him, bursting his mighty heart.”