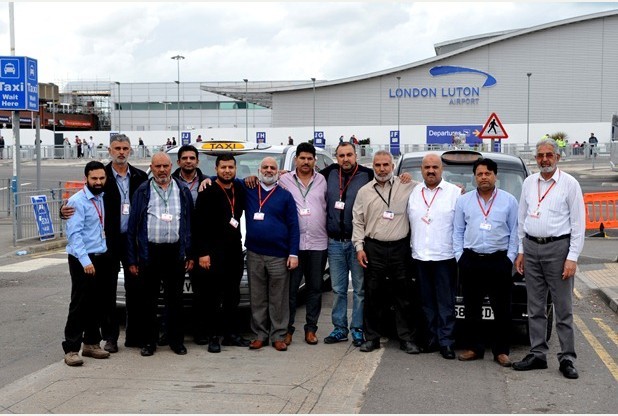 Drivers who are a member of the RMT trade union are protesting the contract and will congregate outside Luton town hall on Wednesday 22 June at 1:30pm.

Luton Airport awarded a five year contract at the airport to London-based firm Addison Lee, after a contract with Luton Hackney Carriages Association expired in February.

Former taxi driver Barkat Hussain, of Claremont Road, Luton, fears that this could lead taxi drivers to ‘flood’ the town centre, which could lead to a rise in fares.

He said: “Hackney cab drivers will have no choice but to flood the town with their vehicles, as they need to feed their families and pay their mortgages like the rest of us.

“This will mean all Luton fares will be forced up as otherwise no-one will be able to make a living driving a taxi.”

A protest by cab drivers, held on June 1, caused chaos for commuters as up to 150 hackney carriage drivers ‘plied for hire’ on roads leading up to the airport – blocking the route for visitors.

People took to social media to complain about the delays to their journey, with some missing flight connections. Local drivers fear they may lose their jobs and livelihoods as a result of the new contract.

RMT General Secretary Mick Cash said: “RMT demands that the Luton Airport tender be re-run to give proper weight to the contribution from local drivers.

“RMT also demands that the taxi rank at the airport be re-instated. If this does not occur, local drivers face being ruined.

“Allowing multi-nationals to gorge themselves on fees earned by providing local services, will simply lead to those services being overpriced and revenue being exported out of the area.”