Taxi drivers block streets of Rio in protest against Uber 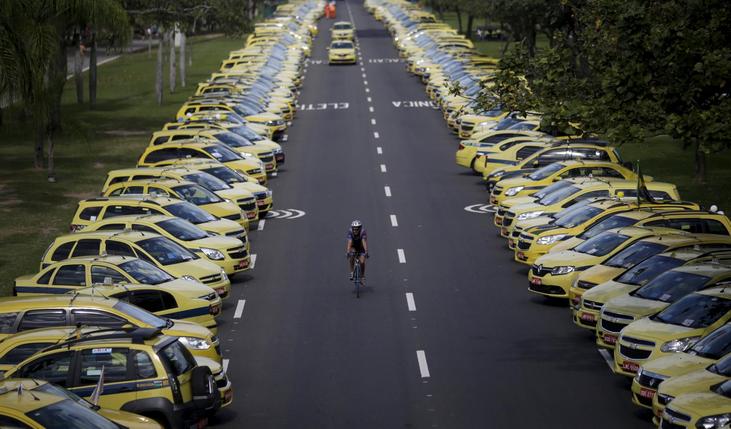 A man rides his bicycle between taxis parked on the street during a protest against the online car-sharing service Uber in Rio de Janeiro, Brazil July 24, 2015.

More than a thousand taxi drivers protested in Rio de Janeiro on Friday against ride-sharing company Uber [UBER.UL], blocking roads and stalling traffic during morning rush hour as tensions rise in the city over the mobile app ride service.

Uber Technologies Inc responded by offering free rides to customers to help alleviate transport issues on what it called a “difficult day for getting around.”

The company has come under fire in countries around the world

, with local taxi drivers complaining that Uber drivers are not properly regulated and have fewer overhead costs, which makes them unfairly competitive.

In Rio, cabbies parked their yellow taxis in a chain stretching for 5 kilometers (3 miles) along one of the city’s main thoroughfares that connects the affluent south zone with the central business district. Taxi drivers honked their horns and chanted.

“We want to combat the illegal (drivers). We are the official ones, we have a responsibility, we are professionals who have families,” said Alexander Campos, a taxi driver from Belo Horizonte who drove the 400 kilometers (248 miles) to Rio for the protest.

In a statement, Uber said it defends customer

choice and that “innovation is crucial” in a city like Rio, “which has a population in need of more options and receives millions of tourists a year.”

The company also offered people in Rio two free rides up to the value of 50 reais ($15) each from 7 a.m. to 7 p.m. local time, with an accompanying Twitter hashtag #RIONAOPARA or “Rio doesn’t stop.”