Taxi drivers and the importance of ‘The Knowledge’

Visitors to the London Olympics can be assured of one thing – their cab driver will know where they are going thanks to a rigorous test that takes years to master. 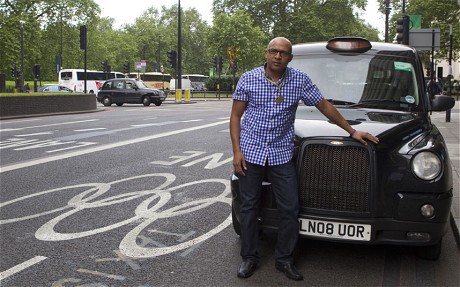 London’s black cabs are one of the most famous sights in the capital, on a par with double-decker buses and the Houses of Parliament . Their drivers are almost as renowned and, with their in-depth knowledge, few people are better equipped at finding the quickest routes amid the congestion and chaos of London’s streets. Hail a black taxi from the kerb day or night and they should know the quickest route to your destination, whether it’s a famous landmark such as Buckingham Palace or a hotel in a backstreet south of the river. And all without satnav.

Drivers go through rigorous training to get their badge, passing “The Knowledge”, a test which has been described as a bit like having a mental atlas of London in your head. And they see all walks of life.

“You never know who you’re going to get in the back of your cab, or how they’ll behave,” says Tom Marie, a London cabbie from Watford with 15 years behind the wheel. “Sometimes arguing couples get in, they can be having a flaming row and you just have to try to turn yourself invisible.

“You turn the music up and pretend you can’t hear.”

There are no short cuts to becoming a black-taxi driver, however. Students, known as “Knowledge boys” (or girls), spend years driving through London learning thousands of streets and the quickest “runs” or routes from one point to another. Most do this by scooter, covering thousands of miles in the process.

John Mason is director of London Taxi and Private Hire, part of Transport for London (TfL), and oversees all Knowledge examiners. He says: “The Knowledge has a reputation as the hardest taxi driver test in the world. It is an incredibly difficult test that’s steeped in tradition and history. It’s also a big investment.

“It’s about making sure every taxi driver is up to the highest possible standard. Customers have very high expectations.”

And learning the runs is just stage one of acquiring The Knowledge.

When students feel ready, they sit a basic written exam to get to the next part, a series of one-to-one interviews. These are called “appearances”, and are oral tests with an examiner. During the appearance, applicants are told the start and finishing points of journeys and have to describe the shortest route between them.

“This is when the really hard part starts,” says Mason, 42. “The examiner will ask completely random runs.”

Failure means you must have another appearance. The number of appearances depends on the individual. It can be done in as few as three or four, but usually takes many more. Mason has given badges to drivers who have passed in two years – and others who have taken 11 years.

It’s not unusual for students to meet up to go over runs and revise together. There are also independent Knowledge schools to help with the process. Mason says perseverance is key: “Nobody can fail The Knowledge. They can only give up.”

According to TfL, 700 to 1,000 drivers pass The Knowledge each year, with about 6,000 currently registered as students.

Marie always wanted to be a London cabbie. The 49-year-old worked as a bus driver, milkman and sales rep before he did The Knowledge. It took him two and a half years to pass, riding a moped and learning London’s road network in his spare time.

Born in Mauritius, Marie grew up in London and says: “The first few months are the most nerve-racking of your life. You’re dealing with members of the public and you have to develop the skill to pull over in traffic and pick people up. It takes time to build up the confidence.”

Marie says it’s more difficult to do his job now than it was 15 years ago. There’s the increased traffic congestion to cope with, plus disruption from events such as the Olympic Games.

He says: “The Olympic traffic lanes have had a big impact – a few days ago it took me 20 minutes to drive from Hyde Park Corner to Marble Arch. It normally takes a minute and a half. While I was sitting in traffic, the Olympic lane next to me was basically empty.”

Perhaps it’s no surprise that many Olympic lanes have since been opened to all traffic.

But Marie clearly enjoys being a cabbie, especially the freedom of the job and talking to people. And he’s certainly got a story or two. “Sometimes people are so drunk they can’t remember where they live. I once picked up this guy in the City at 3am and he had to get his wife on the phone to give me the address. He was really shocked when I told him where he lived – he had no idea.

“I’ve had John McEnroe, Liam Gallagher and Caprice in the back of my cab. You meet all sorts.

“Then there was another couple who seemed to be getting on famously. They asked if I could stop so they could buy a bottle of wine. But when the man got out the woman suddenly turned to me and said, ‘Just drive!’ She told me she’d only just met the man and he was getting on her nerves. What could I do? We drove off.

“In the end,” says Marie, “nothing surprises you.”

Passing The Knowledge depends on what type of taxi driver you want to be. There are two types:

– All-London drivers, also known as the Green Badge drivers, must learn 320 routes, 25,000 streets and 20,000 landmarks or places of interest within a six-mile radius of Charing Cross.

It usually takes two to four years to pass and, once qualified, cabbies can work anywhere in the Greater London area.

– Suburban drivers, or Yellow Badge drivers, can choose from London’s nine suburban sectors and must learn 30 to 51 runs in detail plus the streets, landmarks and places of interest.

It’s usually quicker to pass than for All-London drivers – about two years – but cabbies can only work in the sector they’re licensed for.