Minicab operators have called on Transport for London to immediately suspend upstart US rival Uber from operating in the capital, after a Guardian investigationraised questions about the robustness of its approval procedures for driver documents.

Lawyers representing the Licensed Private Hire Car Association (LPHCA), representing companies that employ 15,000 drivers, argued that Uber’s checks on drivers’ insurance papers are “seriously flawed” and put the public at risk at a meeting with officials from TfL. Uber strongly denied the claims. 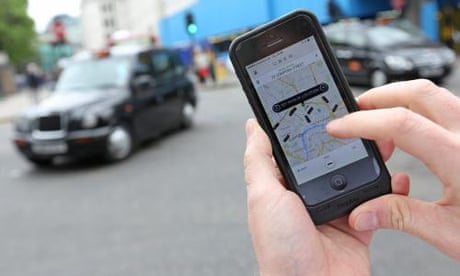 The battle between Uber and the rest of the taxi trade in London is intensifying. The mayor, Boris Johnson, was embroiled in a foul-mouthed row with a black-cab driver over the issue of whether he properly regulated the minicab booking firm that connects registered drivers and customers through a mobile app.

When a driver heckled Johnson over his perceived lack of support for black-cab drivers in their battle against Uber, the mayor replied: “Why don’t you fuck off and die – and not in that order.”

The LPHCA has told TfL its members have “real concerns that Uber … appears to be accorded differing treatment under TfL’s regulatory regime with real consequences for public safety”.

This was strongly denied by Garrett Emmerson, TfL’s chief operating officer for surface transport. He said: “We have not treated, and do not treat, Uber any differently to any other London operator, and we are satisfied that Uber currently comply with legislation and regulations‎ governing private hire operators inLondon.”

Uber admitted last week that it approved a fake insurance document when the Guardian tested its system. Working with the Guardian a whistleblower uploaded an entirely fabricated insurance policy under the logo of a made-up insurance company, “Freecover”, and Uber approved him to pick up customers.

TfL launched an investigation in the apparent loophole. Uber suspended the driver from its system for carrying out the test and reported him to TfL and the police, a move the driver described as “shooting the messenger”. He said he was acting in the public interest.

The chairman of the LPHCA, Steve Wright, also sits on TfL’s board, and said: “They should be suspending Uber’s licence. They have already been prosecuted for no insurance. If TfL don’t deal with this it has serious implications for our position on the board. There have now been two serious breaches.”

Sadiq Khan, one of Labour’s candidates for London mayor, said he would suspend Uber immediately if it emerged just a single driver did not hold genuine paperwork.

“The findings of this Guardian investigation are shocking,” he said. “You can’t take short cuts with Londoners safety. I’m putting private-hire companies like Uber on notice; if I’m elected as mayor it will be one strike and you’re out – even if just one of your drivers is found not have gone through the right checks or not to hold legitimate documentation – then your licence to operate in the capital will be suspended instantly.”

Caroline Pidgeon, the deputy chair of the London Assembly’s transport committee, wrote to Johnson on Wednesday asking “whether or not Uber drivers have recently been found to be operating without insurance” and warned “public confidence in the safety of private-hire vehicles is undermined by rogue operators whose business practices facilitate or enable the flouting of the law.”

The LPCHA’s submission alleges that Uber’s system of checking insurance documents only when the driver registers and when they renew the policy allows drivers to cancel their policies after registration to get a refund knowing that they will face no further checks. It says Uber drivers are “highly likely to be taking advantage of this loophole given the financial pressures they face under Uber’s operating model.”

Asked to comment on their claims, Jo Bertram, Uber’s regional general manager, said: “Uber complies with the exactly the same laws as all other private hire operators. All partner-drivers are fully licensed and insured to carry passengers and go through enhanced disclosure and barring service checks before they can drive.

“Our operation has been scrutinised by the regulators in every city we operate in and has been praised for the economic opportunities it brings to drivers. TfL has done multiple inspections of our documentation systems over recent weeks and have found no issues.”