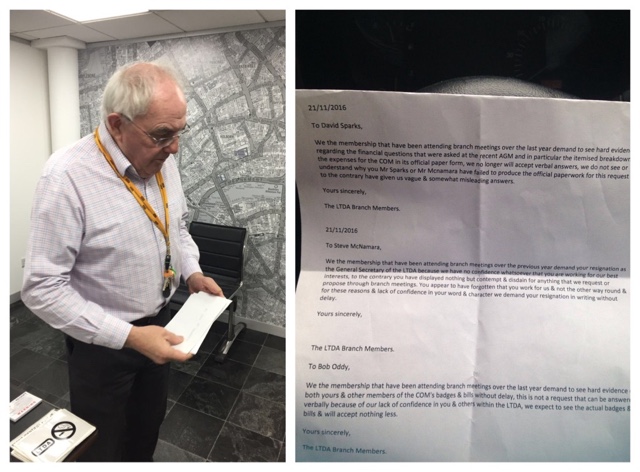 As a prelude to the meeting, a letter contain g a list of demands had been taken and delivered by hand to LTDA accountant David Sparks at Taxi house.
As their demands were serious, LTDA members had asked that General Secretary Steve McNamara attend the central branch meeting, to discuss the contents of the letter.
As the meeting convened, members were informed by the reps, that McNamara had gone to a meeting with the Clean Air For London group, and would probably not make it back in time to attend the branch.
Members were also informed that the two reps in attendance had no knowledge of the contents of the delivered letter.
Because of the severity of their demands, a spokesman for the members ask if the two reps in attendance could immediately contact the General Secretary and demand he attended. The two reps were then informed that the majority of members present did not recognise their positions of branch chair and branch secretary.
The spokesman also alleged that the whole election process at the last meeting held in Harlesden was bordering on illegality.
A text was sent to Steve McNamara and he was given 15 minutes to reply.
When no reply was forthcoming, the members arose en Masse and vacated the venue.
Taxi Leaks spoke to two attendees after the meeting, both said they felt extremely let down by the contempt shown to the branch members by the General Secretary.
..
TO BE CONTINUED
With thanks to London Taxi Radio.