SPICE GIRLS TO PERFORM ON TAXIS AT OLYMPICS CLOSING CEREMONY

The Spice Girls will perform on top of London taxis at Sunday’s Olympic Games Closing Ceremony, as the girlband’s one-off reunion has been confirmed. 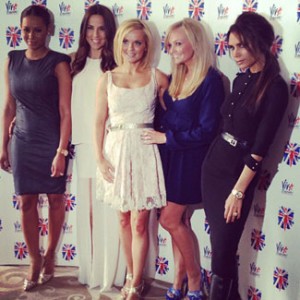 Today’s tabloids show photos of the five women, Geri Halliwell, Emma Bunton, Melanie Chisholm, Melanie Brown and Victoria Beckham, each on top of a taxi in rehearsals for the weekend show.

The ‘Wannabe’ stars have long been rumoured to be reuniting for the show, with Victoria Beckham recently sharing a photo of a microphone on Twitter. However, the girlband are now confirmed for the show alongside fellow ceremony performers, Muse.

Yesterday Muse shared a photo on Twitter of Matt Bellamy rehearsing for the show. The photo saw Matt Bellamy leading a procession of men painted gold and wearing giant drums on their heads.

Recent rumours suggest reclusive British star Kate Bush will take part in the closing ceremony, although her appearance has not been confirmed. Other bands and artists confirmed in the same tabloid report are Queen, Jessie J, Tinie Tempah, Annie Lennox and the Pet Shop Boys.