Spartacus, Joins Up The Dots … And A Plea From UCG Chairman Trevor Merralls To LTDA’s Steve McNamara. 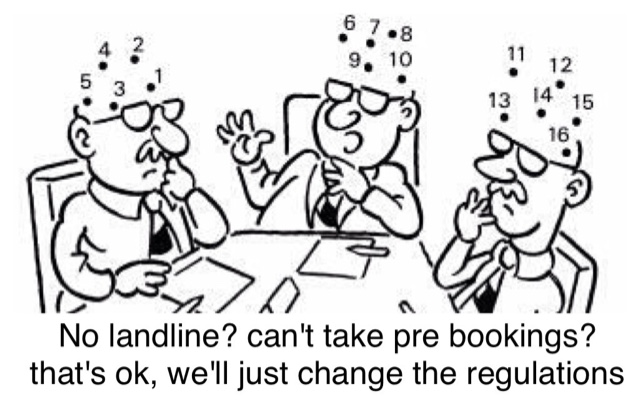 So today we have people waiting in agony on trolleys in A and E whilst the underfunded NHS struggles to cope.

We are one of the lowest funders of health care in the developed world by percentage of GDP.Why is that?

Here’s one reason: TfL, whose senior offices (who as employees of a public authority are effectively officers of the Crown) licensing Uber who pays zero vat in the Netherlands yet HMRC guidance is clear that VAT should be paid in the country where the booking is undertaken, (If that ain’t here then they can’t have a licence).

TfL of course know all this and should never have licensed Uber until HMRC had given clearance and the tax due paid here at 20%.

We also had Leon Daniels coaching Uber in the notorious ‘Dear Jo’ emails about the clearly fictitious difference between short and long term pre booking and to introduce Uber to ‘players’ in the transport sector.

How many phone calls or emails have you ever had from Leon?

You own more licensed vehicles than Uber, is it perhaps you don’t have powerful advocates like Daniel Korski or David Cameron?
It certainly isn’t because of the ‘tax take’ from Uber funding public services.

We now have the employment tribunal’s devastating verdict on their practices again mostly designed to avoid paying the dues that we all do to support essential services.

So we have joined the dots, those poor souls without any dignity lying on trolleys are there due to lack of resources.

The very resources that TfL have been instrumental in denying the other lawful authorities of the Crown that fund the NHS.

We all hope of course that no relative or friend of Leon Daniels and others responsible etc are ever in the unfortunate position of many in A&E today, but if they are, those people need to reflect on their actions and inactions.

The same need to reflect applies when we remember all those devastated by sexual assault as TFL licence individuals with no checkable past, ignore bogus medicals etc etc.

TfL are terrified to even publish the numbers, how immoral is that from a body charged with protecting the public?

We won’t rest until there’s a parliamentary enquiry and those culpable held to account.

As we say just like the Tribunal , IDS, James O’Brien, Iain Dale and the now many returning cab customers have joined the dots and the picture we all see is very disturbing.

The forces of justice, morality, national duty and the public good are with us and we are on the march!