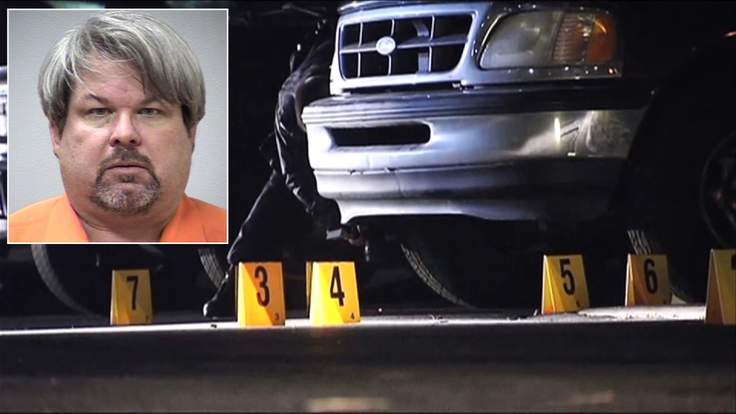 Jason Dalton was arrested following the attacks in the Kalamazoo area

A man arrested after six people were killed in a series of apparently random shootings in a Michigan city was a driver for online taxi service Uber.

Police are questioning 45-year-old Jason Dalton, of Kalamazoo County, following the attacks that took place over the course of more than four hours.

Authorities are investigating a Facebook post that suggested the suspect was driving erratically around the time of the shootings on Saturday.

Officers said a gunman opened fire about 6pm on an apartment building in the city of Kalamazoo where a woman was left severely injured after being shot many times.

About four hours later, a father and his 18-year-old son were shot dead after they did a check over here in the car dealership and while they were looking at vehicles, according to authorities.

About 15 minutes after that, four people were killed and a 14-year-old girl was seriously injured after the gunman shot at the victims sitting in two cars in a restaurant car park.

Kalamazoo County prosecutor Jeff Getting said the victims “appear to be chosen at random, because they were available”.

He added: “They were shot multiple times, multiple – nine, 10, 11 shell casings at each of these scenes.”

Kalamazoo County Undersheriff Paul Matyas revealed the threat was now over but also said of the attacks: “There’s no common denominator with any of these.

“This person was just waiting in the parking lot of the apartment complex. The one at … the dealership, they were looking at cars. The ones at Cracker Barrel, they were just sitting in their cars.”

An Uber representative confirmed Dalton was a driver for the taxi service and said he had passed background checks.