Simon Jenkins: There’s no excuse for London now being the capital of bottlenecks 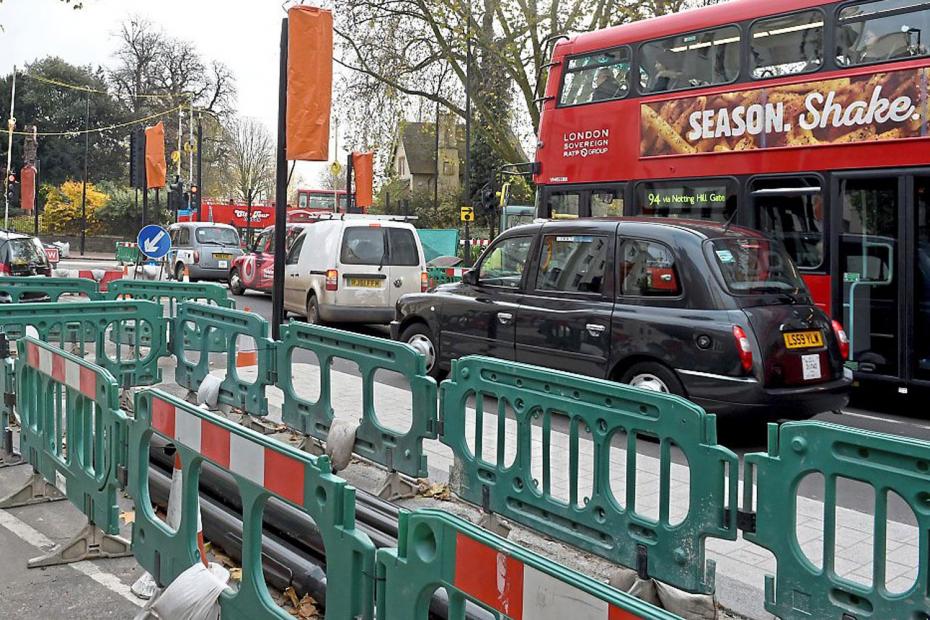 Rumour has it that Transport for London’s sadistic practices division is working overtime this Christmas. Finchley Road is a torture chamber. Tower Bridge is waterboarding for beginners. But nothing equals the agony for the environs of Hyde Park, crafted by Boris Johnson in his final months as mayor.

I was cycling down Bayswater Road at rush hour last week and noticed it was so empty you could land a light aircraft on the carriageway. I realised I was within the “halo effect” of Johnson’s dreaded masterpiece, the Westway-Crossrail cycle superhighway Lancaster Gate gyratory interchange.

It is here that London’s most tortuous and extravagant cycle lane jostles with an obscure Crossrail pit of some three years’ duration. A few signs suggest, when it is too late, that we avoid it. That is when the fun starts.

At the same time the Royal Parks have allowed the leasing of most of Hyde Park to a private company, Winter Wonderland. This has closed the northern carriageway and thus doubled the pressure on Bayswater Road, whose capacity had just been halved by Lancaster Gate. It also attracted probably 100 Uber cars an hour.

Should anyone think the obvious step is to use the park’s southern carriageway, they will find TfL has closed that too. And should anyone do the next obvious thing and go south through Knightsbridge, someone had allowed the Meridian hotel to reduce traffic flow to a single lane, which it occupies much of the time for its drop-offs. For good measure, any attempt to switch lanes to the other side of the road was obviated when a private developer was also allowed to build out into the road. The recipe for chaos was, and is, total.

Locals report journey times of 40 minutes along Bayswater Road alone. Trying to drive through Knightsbridge three weeks ago to reach Victoria took me an hour. Taxis simply refuse to go. Visitors who took one to Chelsea from St Pancras said it took longer than to get to London from the French coast, and cost £60. The net effect is that west London south from the Marylebone Road/A40 to the Thames is all but impassable at peak hours.

It is rubbish to say that all this is just the rich whingeing. Private motorists, whom TfL so disregards, are a minuscule minority of road users, and in central London they are almost non-existent. The overwhelming majority of vehicles are buses, tourist coaches, delivery vans, taxis, Uber cars and emergency vehicles. They are the London economy in microcosm. In Hammersmith Road I recently sat next to a wailing ambulance for a quarter of an hour, both of us unable to move. How does that hit the rich?

The Tubes may be the arteries of the capital but the streets are its veins and intersections its bottlenecks. Last month researchers at Inrix said London’s traffic congestion was the worst of any European city, with more bottlenecks than the whole of Germany. Londoners are said to spend 12 full working days a year delayed by traffic. That is a two-week holiday sacrificed to dud traffic management.

I am all for cycling and the Tube, using them daily. But the treatment of modern traffic as something to do with rich drivers is absurd. The Transport Secretary, Chris Grayling, is in thrall to the thesis. He is giving a mere £1.2 billion to easing road congestion, against some £60-80 billion to a single railway, HS2. Simple innovations such as ending the use of Oxford Street to park mostly empty buses still await implementation. The Mayor, Sadiq Khan, says he will pedestrianise this street “sometime in 2020”.

Roadworks remain the chief culprit of congestion because they are unpredictable. The range of utilities allowed to dig up roads at will — as in no other European city — is legion, the result of the Thatcher government’s deregulation “to boost infrastructure”. Borough engineers used to compete over the number of times their roads were dug up in a year. (I recall Camden High Street holding the record for a while.) Lancaster Gate appeared to be in perpetual limbo, as does the rest of the west London cycle highway. TfL has clearly been taken for a ride by its  contractors.

The burden on London’s traffic is not pressure of demand. Private car use in central London has been falling steadily for years. Who now talks of the congestion charge? London traffic is not a luxury but a necessity. Its curse is bad management. Most streets in central Paris or New York are used for the circulation of traffic. Most in London are one-way streets or exclusive to residents and on-street parking (a lucrative source of council revenue). Evidence suggests that one-way streets are twice as dangerous as two-way ones, while making drivers go twice as far to their destinations. Yet it has taken Westminster 10 years to return Piccadilly and Pall Mall to two-way traffic.

A recent aerial photograph of London’s rush hour showed a few thoroughfares jammed but side streets empty, devoted to the peace and parking needs of local residents. The key to London’s traffic is to bring more streets into mixed use, not fewer, and to regulate them better. London must be the last big city to have no restriction on lorry loading hours. It has no control over articulated trucks, tourist coaches or hire cars. Councils are still “mazing” streets to make them virtual gated enclaves. As for traffic lights, London has so many more than it needs that I wonder whether the engineers are in the pay of the makers.

Some love to argue that traffic anarchy is the source of inspiration and creativity. They say it is what gives London buzz, and if you don’t like it you can go elsewhere. I disagree. Needless traffic congestion is hugely expensive and damages the work and enjoyment of millions. Nor should public officials be allowed to play games with human misery — as this Christmas around Hyde Park. Where is the Mayor?