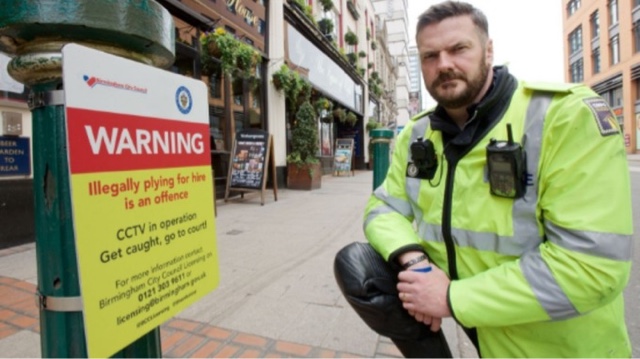 “We would always urge passengers to book their journey or make sure they use a properly licensed cab.”

Minicab drivers who operate illegally in Birmingham are being warned they will be caught and face prosecution.

New signs have been installed across Birmingham’s city centre, reminding minicab drivers against breaking the law by touting for on-street business, a specific offence known in the trade as ’plying.’

Almost 50 rogue drivers were found illegally picking up people in the city during the last 18 months as part of a crackdown.

Warning signs informing plyers  CCTV is in operation have been erected around the city centre. The 100 reflective signs have been put near prominent entertainment spots including:

People who accept unbooked lifts from private hire drivers are not insured in the event of being injured in an accident; only Hackney Carriage vehicles can take fares without being booked in advance

These signs leave no excuses for rogue drivers, if they illegally ply for hire they will be caught.

The majority operate legitimately but there are those who seek to take advantage and make extra cash. Some drivers will use weak excuses such as giving a friend a lift home yet are unable to provide their name or address.

We have seen drivers given six to nine points on their licence along with some drivers being disqualified from driving. One driver was left with a court bill of £1,800.