A cabbies wife has spearheaded a protest over fears that London’s iconic black cabs are in danger of becoming extinct.

Artemis Mercer founded FaceBook Group “Save Our a Black Taxis” to draw attention to the increased pressure on the traditional black cabs.

Joined by hundreds of spouses, family and friends of black cab drivers, they held a peaceful protest outside TfL HQ Windsor a House on Victoria Street.

In just 5 months, the FaceBook groups popularity has led to an expansion of over 12,700 members, making it the fastest growing Taxi group in history.

Yesterday afternoon, family and friends of London’s iconic Cabbies turned up en masse to staged the protest outside Transport for London’s HQ.

Media coverage was fantastic with national press and TV news channels turning up to cover the protest.

Mrs Mercer said: “TfL are simply not doing enough to enforce the rules that ensure public safety in London taxis. London’s cabbies have been left high and dry without the support that they so desperately need from their own governing body.”

She said: “As more and more PH drivers are pushed out by TfL, the roads are getting very congested.”

Artemis’s normally rock steady demeanour faltered slightly as she choked back emotion saying “my husband recently said to me, I used to be proud to be a cab driver but I’m not any more.”

Mrs Mercer went on to say her husband is having to work harder to try and maintain the same income from driving a taxi this year.

“My husband is finding it so hard to bring home the same money as last year. He can’t have a day off without wondering whether he is going to be able to pick it up.”

She claimed TfL’s regulations were not protecting drivers’ income.

“All we want is for TfL to enforce their own regulations. These drivers have all gone through years on the Knowledge to learn the routes. It took my husband four years. And now London has been swamped with mini cabs going backwards and forwards. It’s completely demoralising.”

“I just want TfL to listen.”

She said her campaign was not about the competition between taxi drivers and mini cabs but about fairness. 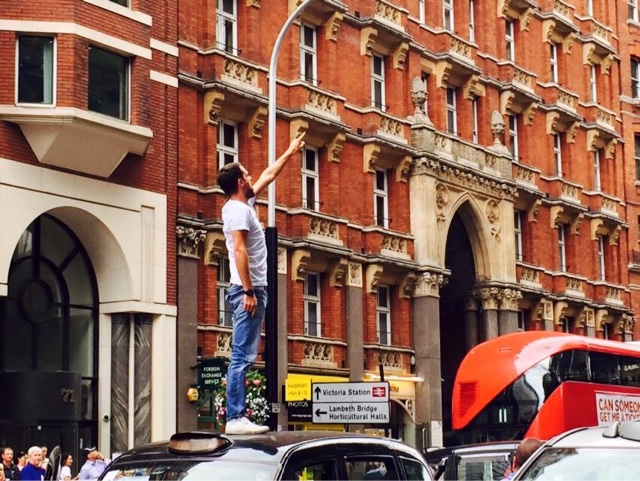 Garrett Emmerson’s, press statement yesterday was nothing short of an insult to all Taxi drivers and their families. But unfortunately, it’s what we’ve come to expect from a licensing authority that has turned its back and shut their ears on its Gold Standard Taxis, frequently voted the best Taxi service in the world.
The TfL chief operating officer of surface transport, said: “As the regulator of London’s taxi and private hire trades, we apply legislation fairly and equally.
We have not treated and do not treat Uber, any differently to any other London operator and we are satisfied that Uber currently complies with private hire licensing requirements”.
Let’s not forget, Emmerson told Assembly Member Caroline Pidgeon that TfL had an army of 400 enforcement officers tackling touting on London Live news.
Emmerson’s statement doesn’t stand up.
It was recently revealed by London Cab Drivers Club chairman Grant Davis on LBC that David Cameron had leaned on Boris Johnson to go easy on Uber.
Subsequently, over a three week period (15 working days), TfL processed almost 2,000 new private hire driver licenses, while some London taxi drivers have had to wait up to 6 months for renewals to their licenses.
TfL are currently clawing in £750,000 a month in new PH licence applications alone. While ignoring taxi driver renewals.
Virtually the whole trade feels let down by the woeful inadequacy of our licensing authority, with a majority believing both TfL and the Mayor Boris Johnson, have an agenda to kill off the iconic back cab trade.
Representatives from all trade orgs recently met with the view of escalating the protests.
One trade leader tweeted last night,
“we are now declaring war, we won’t go without the mother of all fights.”
Editorial comment:
We must congratulate the group on their professionalism in the way this protest was organised. The banners, free T-shirts, flags, stickers and handouts were fantastic. 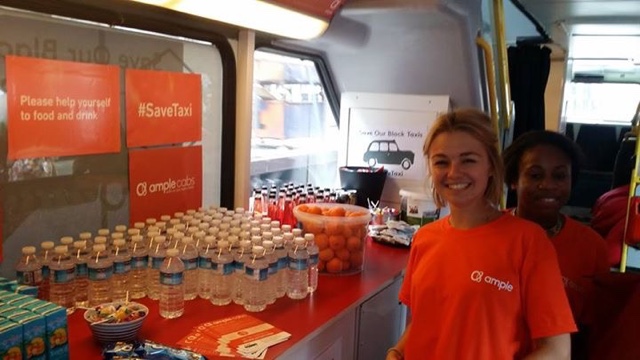 The group also catered for the large crowd handing out drinks, fruit, snacks and also sweets to the children.
Also, we mustn’t forget:
Working away at night in the background, ordinary drivers are taking back the ranks from the touts, with help from the Mayfair Mob Team. These hits, along with the protest today, has not only given me new purpose, it’s put the fire back in my belly. 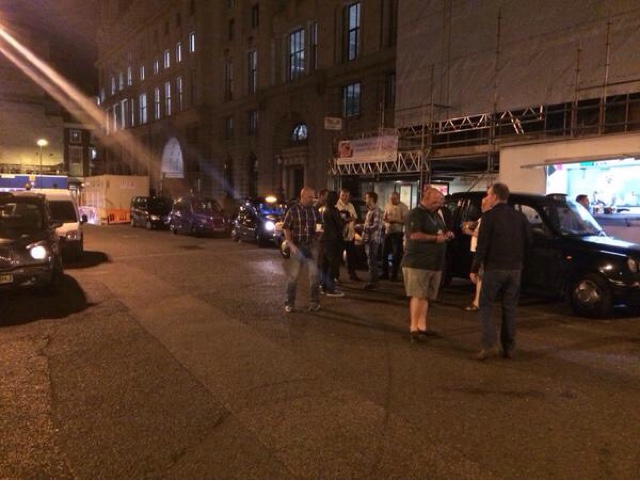 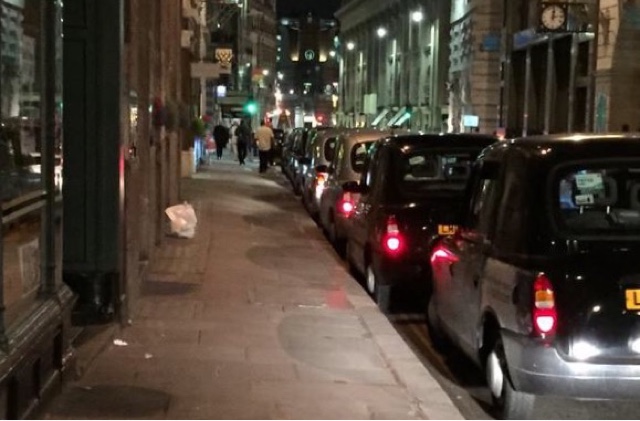 Cabs waiting to access the rank at Forge, keeping the touts off the rank. Drivers have been amazed at the amount of work the touts had been taking off the trade.