RMT LTDB Chariman Mick Bailey: We are not a ‘trade org.’ By Mike Bailey. 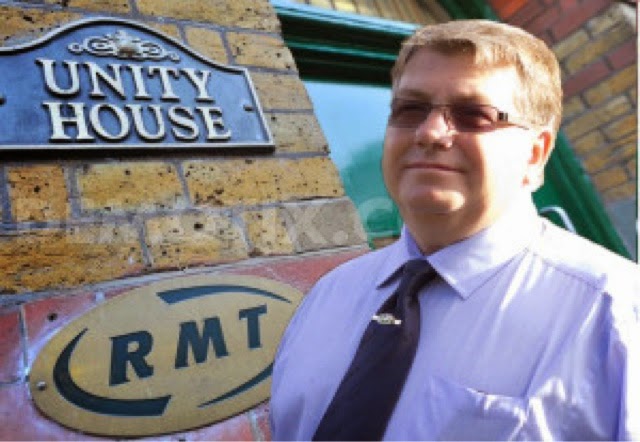 RMT is a progressive, democratic and highly professional trade union, a fast growing union with more than 80,000 members from almost every sector of the transport industry – from the mainline and underground railways, shipping and offshore, buses, taxis, and road freight.

Protecting and bettering our members’ pay and conditions are key RMT objective. We negotiate with over 150 transport-sector companies – using every opportunity to drive home our positive agenda for better pay, shorter hours and safer working conditions.

RMT members can rely on their union to protect and promote their interests in the workplace.

Our former general secretary Bob Crow, RIP, walked away from the sham that is the TfL Board because he recognized what he saw as control by TfL and compliance from the United Trade Group (UTG). Being a man of principle Bob would not have anything to do with such a sham that could not honestly represent members of the RMT and the licensed taxi trade.

We at the RMT have NEVER been involved in any of the agreements or meetings that have done so much damage to the licensed taxi trade in London. However we have been exposed to collusion that prevents the RMT playing a part in the fight to save the taxi trade. TFL have been assisted by a sham engagement policy drafted as we now know by the former director of LTPH and supported by the UTG.

TFL know that if the RMT’s representatives were at the table of the now called Cabbies Cabinet things would have been very different. Cast  your mind back do you remember receiving a letter from the Mayor telling us all that there had been little interest in the cabbies Cabinet and therefore he wouldn’t be going ahead with his plan, then suddenly very recently we read in one of the trade papers that the UTG were attending meetings under the heading of Cabbies Cabinet.

TFL know full well that had the RMT been in attendance at these meetings we would have insisted on full verbatim minutes to inform the trade as a whole of discussions that took place.
How can you have a meeting without a full record of who says what to whom?  It is ridiculous. What happens if there is a dispute in the future? How would anyone know what went on without minutes? More importantly, how do you find out what your members think of a proposal if they are only informed by a headline following agreement by the trade orgs.?

We have to face up to the truth that the UTG has failed the trade. We must come together and insist that we have a proper voice inside TFL. Ensuring proper policy is formulated that is in the interest of   retaining the two tier system within London and that it is properly upheld.

The RMT London taxi branch believe that only the full protection of our right to ply for hire will ensure that our trade is future proof.

We acknowledge that there are many other issues that must be rectified but are steadfast in our belief that the right to ply for hire is fundamental to the future of the taxi trade in London.

But a trade union is only a strong as its members. Being a member of the trade union does not mean we can leave all the work to somebody else. We need to support each other and fight for our jobs in the words of the late Bob Crow “if you fight you may lose but if you never fight you will always lose”.

I believe that 2015 will be a very decisive year for the cab trade in London.

Control of licensing of the London taxi trade was handed over to the newly formed Transport for London following the 1998 Private Hire Vehicles Act. Records of the debate at the time show that the trade was badly underrepresented. Some speakers at the time were supportive of the trade saying things such as” private hire vehicles must never be allowed to encroach on the licensed taxis right to ply for hire” but overtime this has been ignored. This right is hard earned by candidates completing the knowledge, investing both time and money. Licensed London taxi drivers are repeatedly described as the gold standard of the industry. With public safety being paramount to this stamp.

“RMT London Taxi Drivers in its written submission to the G.L.A highlighted that policies introduced by TFL should not only protect the public but also the taxi drivers hard earned right to ply for hire. Given that London has the ‘gold standard’ around the world for its taxi service, principles established through case law should be upheld in absence of a statutory definition.

The union will follow up to ask the London Assembly, why the oversight?

As we have seen recently under the control of TfL we have witnessed the gradual undermining of the licensed taxi trade. This has been further highlighted by the findings of the GLA investigation carried out recently. They commented that the service carried out by TfL was “Woefully inadequate”

So let us learn from our past mistakes, let us not allow the licensed taxi trade in London to be undermined and killed off by our own inaction.
We know what we need to do to protect our livelihoods and the livelihoods of future generations.

Join a specialist trade union that will fight to the end to protect it’s members. To ensure the licensed taxi trade has a future built by its members for its members which supports jobs for the future. For our sons, daughters and grandchildren.
Let us take our fight to the heart of Transport for London and the Government.

To do nothing is a crime.