In the last year, car-service app startups Uber and Lyft have made major progress toward fixing their drivers’ insurance issues, gradually taking more responsibility for accidents that happen to on-duty drivers. But one sticky problem persists: drivers often lie to their personal insurance about their work, which can lead to confusion and, in some extreme cases, insurance fraud.

Drivers hear constant mixed messages about proper insurance. Uber and Lyft tell drivers that personal insurance will suffice, but personal insurers, unwilling to cover commercial activity, have started canceling drivers’ policies if they’re discovered. Full commercial insurance, which can cost up to 10 times as much as personal insurance, is too costly for most drivers. Hybrid insurance policies are months away from market, and drivers will give tens of millions of rides in the meantime.

For many drivers, the only solution is to buy personal insurance and hide their status from their insurer. Sometimes that means just not mentioning it. But as more insurance companies are catching on and asking drivers directly if they work for Uber, Lyft or a similar company, more drivers are forced to lie or risk losing their policy.

“I’d guess that 95% to 98% of drivers are lying or hiding,” said Kelly Dessaint, an UberX and Lyft driver in San Francisco. “It’s a whistling-past-the-graveyard attitude.” In a poll on a driver Facebook group last month, 22 drivers said they hadn’t told their personal insurer about their Uber activity, while only two said they had.

The don’t-ask-don’t-tell strategy usually works until there’s a crash. Ian, a Bay Area Uber driver, was off duty when his car was hit by another car in October. While he was filing a claim with Geico, they asked him if he ever worked for Uber or Lyft.

“I panicked,” he said. “They put me on the spot. So I just answered honestly and said yes, but that I wasn’t working when this happened.” (Ian, like other drivers in this story, asked to be identified only by his first name to hide his driver status from his insurer.)

His claim was processed normally. But a few weeks later, Geico sent Ian a letter saying his policy was canceled because his personal policy doesn’t cover commercial activity. Geico also dropped Matt, a Chicago-area driver, last month even though he never told them about his work and had actually stopped driving for Uber a few months before.

The cancelations aren’t flukes. An internal Geico document obtained by the San Francisco Chronicle last month tells agents to reject car-service app drivers and refer them to Geico’s fraud unit. Other large insurers suggested they are equally wary of insuring these drivers, even with Lyft and Uber’s expanding insurance coverage. State Farm spokesman Sevag Sarkissian said the company would be comfortable ensuring “occasional” car-service app drivers, but not people who use their cars “primarily” for that work — though he wouldn’t specify where the line would be drawn. Allstate ALL +0.14% and Geico spokespeople only said the companies wouldn’t cover app-related claims and wouldn’t comment on whether they would drop Uber, Lyft or Sidecar drivers. (This isn’t a problem for car-service app drivers who are required to have commercial insurance, such as UberBlack and UberSUV drivers and all Lyft and Uber drivers in New York.)

Commercial insurance, which would cover drivers who carry passengers for money, is prohibitively expensive, especially for part-time drivers. Ian, who is unemployed, said he has no choice but to lie to his next insurer.

“Uber is the only income I have,” he said. “I found another insurance policy, I’m keeping my mouth shut and I’m hoping I drive safely enough. I can’t pay $800 a month for commercial insurance.”

State Farm, Geico and Allstate are the three biggest auto insurers in the U.S. and are likely insuring hundreds of thousands of Uber, Lyft and Sidecar drivers. But they have been slow to adapt to this new economy, which has existed since 2012, when UberX and Lyft allowed anyone to become a driver. Instead of being clear with drivers, insurers turned to knee-jerk reactions like sudden policy cancelations and are only recently beginning to talk about developing hybrid policies. 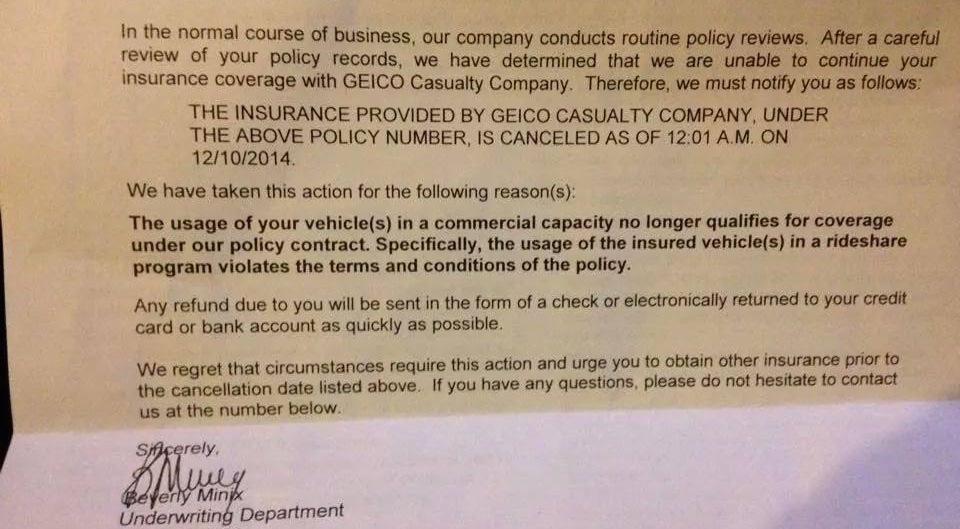 When Is ‘Primary’ Insurance Really Primary?

A key part of this agreement is “primary” insurance – insurance that steps in first when one or more policy could apply. If Uber and Lyft offer primary insurance, that means they agree to pay for damages from a driver’s accident without the driver’s personal insurance needing to decline the claim first.

For years, Uber and Lyft avoided offering their insurance as primary. Instead, they told drivers to report accidents to their personal insurers first, hoping that the personal insurers would pay. But by early 2014, legislators became tired of that pattern and drafted two bills, one in California and the other in Colorado, that required the companies to provide primary liability insurance while drivers have the app on.

Uber and Lyft moved quickly and proactively. In July, both companies started providing primary insurance for drivers matched with a rider, even though the laws don’t go into effect until next January (Colorado) and July (California).

Drivers took this to mean their insurance worries had been resolved. “When they introduced the new insurance, I thought they were pretty much saying, ‘When you turn on your app, you’ll be covered by Lyft or Uber. When you have it off, then you’re covered by your own insurance,’” said Max, a San Francisco Lyft driver.

But when another car sideswiped Max’s while he was carrying a passenger last month, he learned that the process isn’t quite so smooth. He reported the accident to Lyft and expected the company to handle it. But a customer service representative told him that if he wanted to use Lyft’s collision coverage, he had to report to the accident to his personal insurance. “If your personal insurance denies your claim, then Lyft’s contingent collision policy will step in,” the rep wrote.

Max felt stuck. “All the drivers say, ‘Don’t tell your own insurance. They might cancel on you,’” he said. “Lyft knows about this too. But they have repeatedly asked me to do it. They emailed me three or four times saying, ‘Max, can you report to your personal insurance and see if they’ll cover?’”

In some cases, the confusion leads drivers to commit insurance fraud. (Fraud is lying on an insurance claim, not just hiding information from your insurer.) When Sarah, a Los Angeles-area Lyft driver, was in an on-duty accident in August, Lyft also told her to report it to her personal insurance for collision coverage. When she did, her insurer asked her whether she was driving for Uber or Lyft during the accident. “I lied and said I wasn’t because I was afraid,” she said. 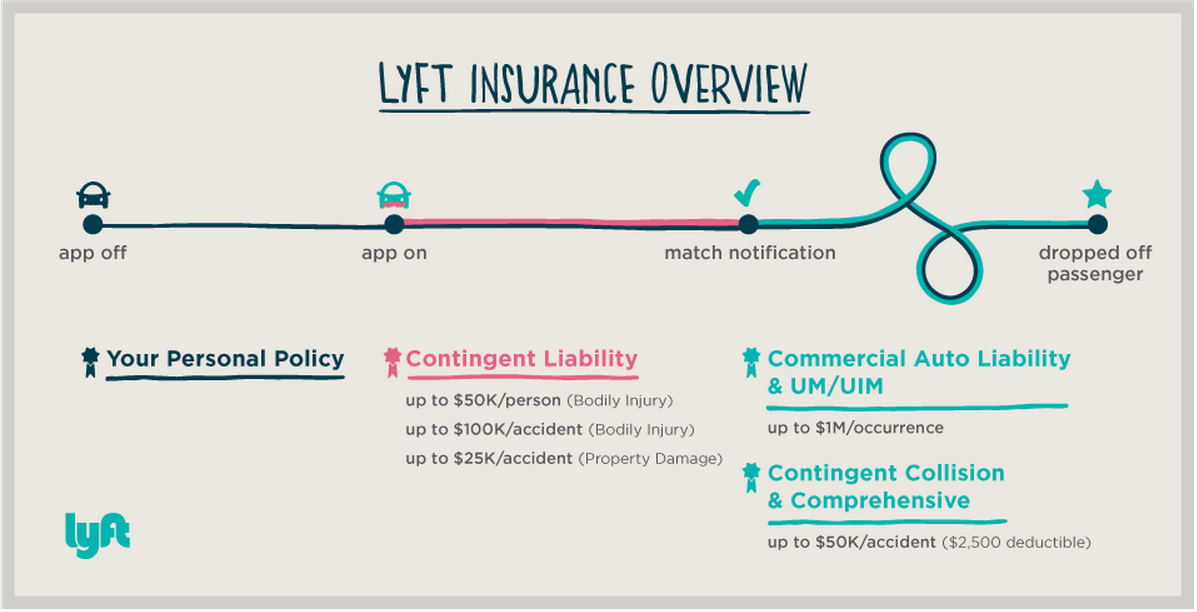 Do Drivers Have To Tell Personal Insurers About Accidents?

Lyft spokeswoman Erin Simpson told FORBES on Wednesday that drivers do not need to report accidents to their personal insurer to use Lyft’s collision coverage. That message has not been made clear to drivers like Max and Sarah — and to any driver who looked at Lyft’s FAQ page, where drivers were told, until recently, that the collision policy “will respond if your personal auto policy declines the claim for collision damages to your vehicle solely because you are driving with Lyft.” Simpson said the FAQs and driver support replies were out of date, and Lyft changed them after FORBES began asking about them.

Uber’s insurance page was much clearer about its policy. If an Uber driver is in an accident while they are matched with a rider, they don’t need to report it to their personal insurance. They only need to show Uber that their personal policy has collision coverage, and Uber’s insurer will pay for repairs. With Sidecar, a smaller car-service startup, its only primary insurance is liability insurance, which covers damage to other people and property. Its collision insurance, which covers damages to a driver’s car, is not primary, even when a passenger is in the car.

Drivers face another catch-22: If they’re in an on-duty accident, they don’t want to tell their personal insurer. But personal insurers want to know about every accident they can — it’s essential to how they calculate premiums and risk. So they often ask or require that drivers report all accidents, and they can raise premiums or drop drivers who don’t. Lyft tells drivers in its FAQ to “make sure you file a claim with your personal auto insurance provider,” and Simpson says that’s to ensure their drivers don’t accidentally break a contract.

“Almost all auto policy contracts, including State Farm’s, require the policyholder to give notice to their carrier of an accident or loss as soon as reasonably possible,” said State Farm’s Sarkissian. 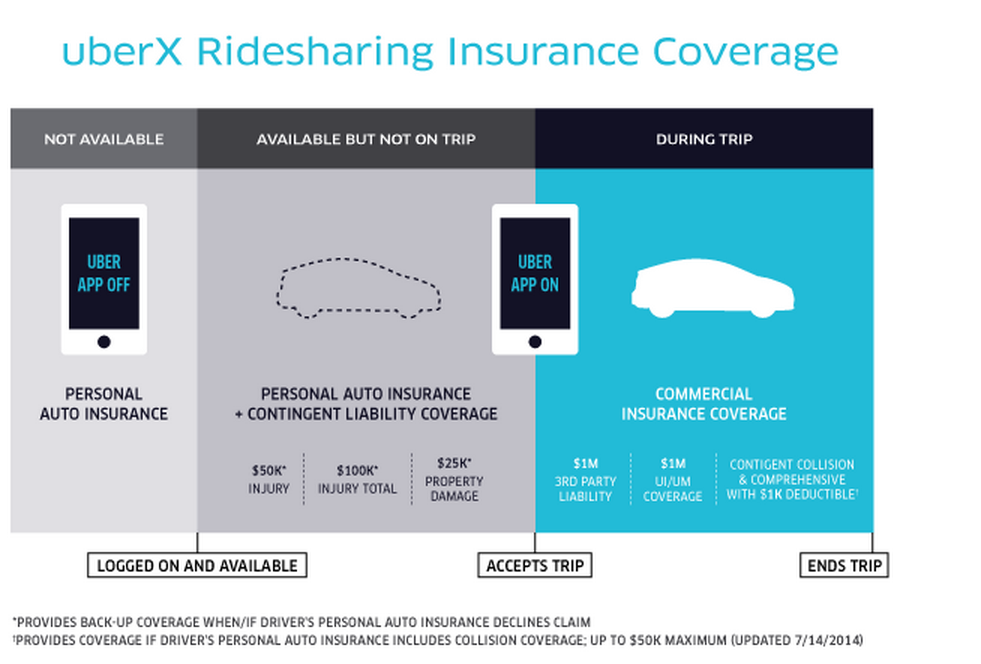 The Collision Gap Remains, Even With New Laws

Some of these problems will be solved by springtime, when the first hybrid insurance policies are expected to become widely available. At least fivecompanies, including MetLife and Geico, are developing policies that would be expressly aimed toward these drivers and would be cheaper than full commercial insurance. One hybrid policy already exists from Erie Insurance, but it’s only available in Indiana and Illinois.

Drivers with hybrid policies should no longer have to lie to their personal insurance, and new laws will make Uber, Lyft and Sidecar’s insurance primary at all times while the app is on – but that only applies to liability insurance, and only in California and Colorado (for now).

Collision coverage will remain spotty. Neither new law requires that the car-service apps’ collision insurance be primary. Uber and Lyft already offer primary collision insurance for the times when a driver is matched with a rider. Sidecar does not. And none of them offers collision insurance for the time when a driver has the app on but hasn’t accepted a ride request yet — the pesky “gap.” If drivers get in an accident during that period, their personal insurer could easily deny the claim if they consider it commercial activity, and the driver would be stuck paying for car repairs. For many drivers, things have improved but there’s still reason to be wary.

“I think I’m definitely more aware of what the insurance policy means,” said Max. “I’ll probably still drive for them, but that’s always going to be on the back of my mind.”