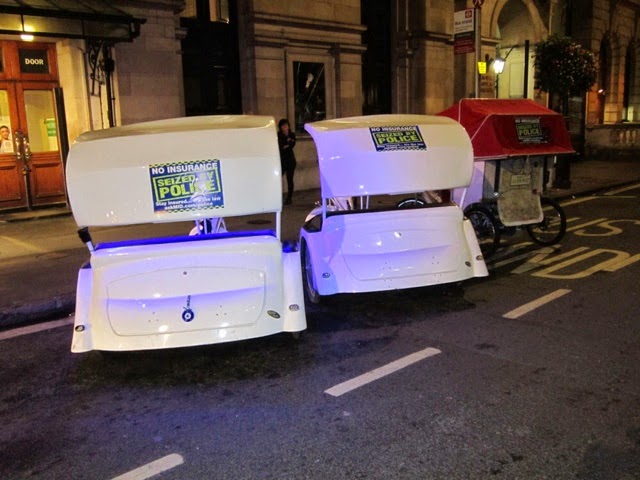 Rogue pedicabs adapted with motors to make them go faster have been seized following an operation last weekend.

Officers from the Metropolitan Police Service’s Roads and Transport Policing Command, in partnership with Transport for London, seized nine pedicabs which were classified as motor vehicles due to their weight.

Over 50 pedicabs were inspected during the operation which took place in central London on 5 and 6 September.

The drivers of these vehicles were found to have no driving licences, no tax and no insurance. Two of the pedicab owners received fines of £200 and six point fixed penalty notices at the roadside. Seven other pedicab owners were reported for summons, one rider was found to be disqualified from driving and will appear at court in due course, and 25 were advised about waiting and parking restrictions.

Superintendent Rob Revill, Roads and Transport Policing Command said: “Operations checking pedicabs that have been fitted with electric motors like this will continue to prevent collisions, as well as reducing the anti-social behaviour associated with obstructing pavements and roads.

These vehicles have historically fallen outside of the insurance legislation, leaving the public passengers using them exposed to higher levels of risk.”