REPLY FROM THE MAYOR OF LONDON, DON’T PISS UP MY BACK AND TELL ME IT’S RAINING 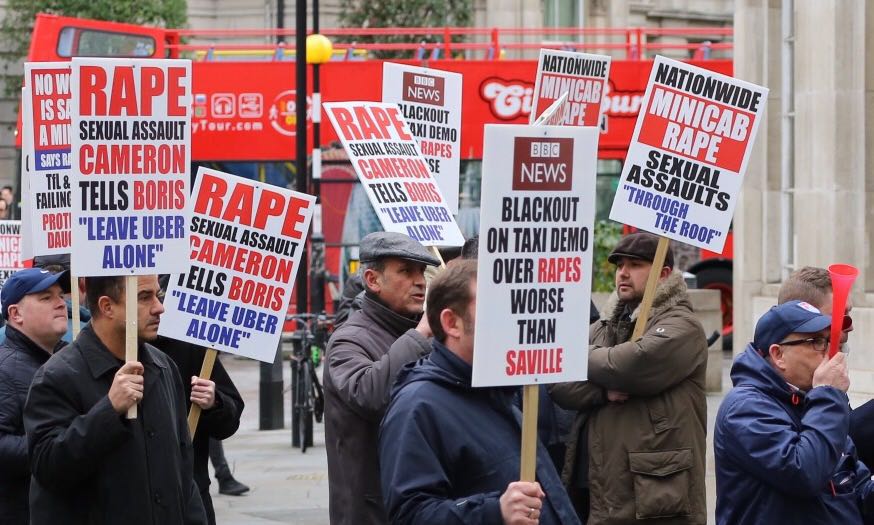 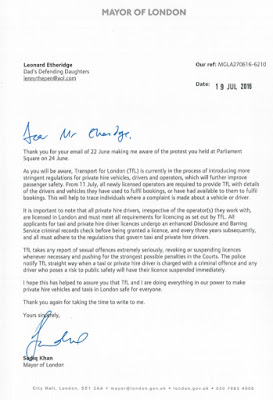 I felt your letter, an insult to my intelligence, was a fob.

You did not answer any of my questions or engage with any of my suggestions.

Did you actually read my email?

In your reply you suggest I may be aware of the introduction of more stringent regulations.

Are any of these regulations new?

Or is TfL finally enforcing those already in place, but never previously policed?

Correct Hire & Reward insurance has always been a requirement. TfL decided not to enforce it.

In fact, Leon Daniels lied to the GLA, that Uber had ‘on/off’ insurance. They did not.

Leon Daniels also lied to the GLA, stating he was in possession of Uber’s landline. The landline he offered Ms Shawcross was Jo Bertram’s personal number.

So these “more stringent regulations” are nothing more than TfL finally doing their job.

Do Uber now comply with all the specifications laid out by TfL, regarding landline and offices?

And taking into account that Uber have sworn on oath, that they do not receive or handle customer bookings in any way, worldwide; do they still comply to your ‘stringent regulations’?

In my email, I proffered three points toward preventing rape and sexual assault in TfL Licensed Minicabs.

You acknowledged none of them.

Your reply was like an automated TfL response on Twitter; stating all Private Hire applicants go through an enhanced DBS. “Have a nice day.” “You’re welcome.”

The Licensed London Taxi trade has had enough political sidestepping and untrue truths from your predecessor.

Refugees and asylum seekers are afforded certain exemptions, if the DBS cannot check the applicants’ background.

This is unacceptable. Do you expect someone’s daughter to get into a car with a stranger?

Are our daughters not as important as yours?

You, along with most MPs and the media, refuse to acknowledge the glaring problem this trade is facing from unchecked predators.

I watched you answer the ‘Uber rape’ question. You were quick to qualify yourself by saying one rape is one too many. But went on to say that Uber is (only) 32 of 154.

Surely you understand that the rise in sexual assaults since 2012 is because TfL relaxed their regulations to the point of deregulation, to appease Uber.

That deregulation went across the Private Hire board.

No it is not just Uber drivers who have raped and sexually assaulted women during a twelve month period, but because of their influence over TfL, deregulation has been allowed to happen.

Now we all know that serious crime, such as murder, rape and sexual assault can happen to any profession.

Doctors, teachers, politicians, policemen, TV presenters, even Taxi drivers bring shame to their trade – but not on the scale of Uber.

And Uber’s safety record is hardly enviable, is it?

It seems a Prius is crashing somewhere in London, daily.

I personally cannot remember one single day where I did not witness an imbecile with a roundel doing something dangerous.

One of our members knows only too well the horror of being the father of a rape victim.

Rape can destroy lives and families.

You know that it is widely recognised that only ten percent of victims come forward.

TfL or police need to legally enter Uber’s premises and view all previous complaints against Uber drivers, and make sure that all have been forwarded on to the correct authorities.

You promote yourself as a family man, who loves his wife and daughters. I do not doubt your sincerity for a second; it’s the most natural thing in the world.

What about my daughters? What about everyone else’s daughters, wives, mothers, sisters, aunts?

What about our sons? Rape is not gender specific.

If you consciously keep Londoners in the dark, then you are culpable; much the same way as the BBC are with Jimmy Savile.

We are not going away. In fact the less you do to check this rise in rape and sexual assault, the bigger and stronger we become.

If you are going to reply to this email, please do so having read it.