Question : Was Leon Daniels Acting In The Best Interests Of Public Safety, Or Is This A Vendetta ? 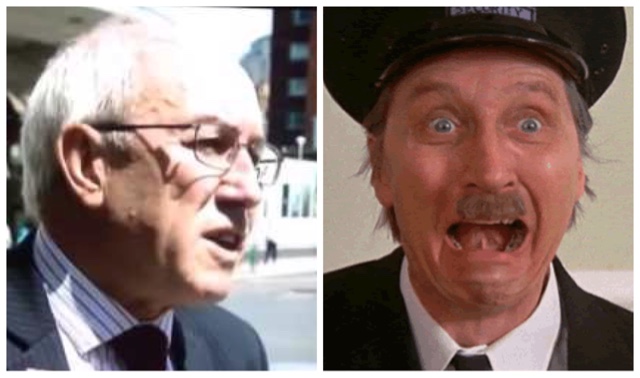 Below is a reply from Will Grozier, answering charges that he was forming an unauthorised Taxi rank, made by TfL Managing Director of Surface Transport, Leon Daniels.
The email itself tells the virtually the full story, but still it begs a few questions.
1)  Did Leon Daniels overstep his authority ?
2)  Why Did Leon Danieks not accept the perfectly clear explanation made by he driver in question ?
3)  Has Leon Danieks ever fully read and understood the abstract of law appertaining to Licensed Taxi regulations ?
Without Prejudice’
Dear Mr Robinson
I refer to your letter of 20th April I which you say that an appointment had been set for Monday 27th April ( today ) at 14.00.
This is not my recollection of the substance of our telephone conversation on Friday 17th when the meeting was set for Tuesday 28th.
In that discussion I advised you that I would be away for the week and in fact have only returned yesterday, Sunday to pick up the post and have had little or no time to prepare for a meeting
I must there advise you that I will not be attending Palestra this afternoon.
In any event it is of little consequence as you will see from the following that the allegation of illegal parking is unfounded and that furthermore there are serious irregularities associated with the behaviour of the ‘authorised officer’.
The sequence of events is as follows;
On Sunday 22nd March I was allocated a job via GetTaxi to pick up at Paddington Station in Praed St ( see attached copy job sheet ) and I stopped just east of the pedestrian crossing near to the access ramp to the Station concourse which runs parallel to London St.
I was approached by a man who I initially thought was my customer but who produced briefly from a jacket pocket what I took to be a warrant card, I did not have time to get a good look at it or discern a name.
The man stood by my open luggage door window and said,
‘You’re not parked on the crossing are you driver?’
I thought this was very odd as here was a person who I assumed was a police officer asking me to corroborate what I knew to be true – I was stopped, not parked on the very short section of double yellow lines between the pedestrian crossing and the access ramp in such a way that I could see travellers leaving the station and walking up the ramp – in such circumstances it is impossible for any part of my taxi to be fouling the crossing.
I said,
‘No’
The question was delivered in a patronising and rather sarcastic manner and clearly intended to elicit a response of awareness, admission and apology.
As none of these responses were forthcoming the man then said to me,
‘Well be on your way and we’ll say no more about it.’
Again delivered in a patronising manner, but this time with an implied threat.
As I was engaged in a perfectly legitimate activity, stopping on yellow lines in response to a hail from a would be passenger – albeit in this instance a request delivered via a data terminal – I declined his invitation to move on as I expected my passenger to materialise at any moment.
I challenged him to declare his authority to require me to move and he said he was from TfL and then repeated his demand that I move away. I then said that I had not seen the ID properly and asked that he show me again.
The badge showed the name Leon Daniels which I associated with the management of TfL and more particularly one of the individuals held responsible by the vast majority of the taxi trade for the back door deregulation of the industry via the Uber fiasco
I took Mr Daniels to task over this failure of proper stewardship of the taxi trade, he responded defensively by claiming that TfL had no choice in the matter of granting Uber an Operators Licence.
The conversation continued in this vein for a short period after which he walked away and I saw him pause at the rear of my taxi and clearly took a note of the cab number.
Summary;
Mr Daniels did not identify himself properly as a TfL Enforcement Officer when he approached my cab nor did he allow sufficient time for his ID to be clearly established prior to the interrogation. In doing so he placed himself at risk of being accused of impersonating a police officer, a serious offence.
He failed to ask what I was doing and made an assumption based perhaps on the tendency of some drivers to use this area as an impromptu rank.
It ill behoves an individual holding such a senior position as does Mr Daniels at TfL, to behave in a manner of some latter day  Blakey in ‘On The Buses’ particularly when he occupies the unenviable position within the taxi trade of pariah or persona non grata.
This incident serves to reinforce the conclusions of the recent GLA Transport Committee report ‘Future Proof’ who concluded that TfL TPH suffer from a systemic and ‘woeful inadequacy’
I am not minded to make a formal complaint believing that it is the best interests of all concerned that we take Leon’s advice and
‘Move on and we’ll say no more about it’
Yours faithfully
W J Grozier
Below is proof of booking from GetTaxi.co.uk

Hi Will,
Below are the details of that journey. Hope this helps.

Editorial Comment:
As editor of Taxi Leaks, I would ask Mr Daniels to declare the total number of private hire vehicles he has personally reported to TfL, in the last 12 months, for forming unauthorised ranks and illegally plying for hire ?
Space will be made available on this blog for Mr Daniels reply.
Regards Jim Thomas
Source: TaxiLeaks