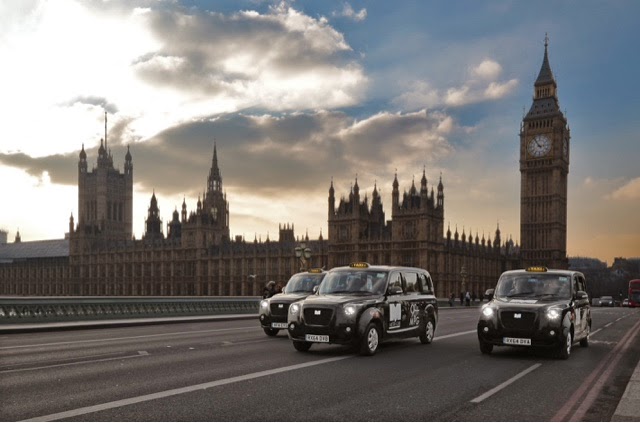 First fleet of new Metrocabs takes to the streets of London

Mytchett, Surrey, 10 February 2015 – Frazer-Nash Research and Ecotive, the makers of the all-new Metrocab, are proud to confirm that the Metrocab has become the first zero-emission-capable taxi tobe licensed by Transport for London to operate on a trial basis as a London Hackney Carriage.

The first few Metrocabs are already on the streets of London transporting fare-paying customers around the capital for the first time.

Metrocab chairman, Sir Charles Masefield, said: “The Metrocab has received numerous accolades and plaudits across the board in recent months, but now it is official – it is the first licensed range extended electric cab for London, and indeed the first in the world.  We’re very proud, and delighted with the Metrocabs’ performance, economy and range at the hands of the first few London cabbies to be operating our range extended electric taxis.”

The first London taxi driver to operate the Range Extended Electric (REE) Metrocab, Preston Morris, said: “It is great news for me, and for cabbies across London that the Metrocab is now licensed towork in the capital.  The cash savings on fuel are significant, the ride and comfort outstanding, and my first customers are thrilled with the new cab.  With its air suspension providing unrivalled comfort, panoramic glass roof for views of the city and silent powertrain, what’s not to like?”

The Metrocab has also been shortlisted for the London Transport Awards 2015, in the Taxi & Private Hire Innovator of the Year category.  Key note speaker at the awards presentation, to be held in London in March, Sir Peter Hendy CBE, said: “I am delighted, as always, to support these awards, which recognise all that our industry does every day to deliver transport innovation and progress for London and the UK, and congratulate those organisations and individuals nominated for their achievements over the last year.”

British designed, engineered and built to help London meet its air quality targets, the Metrocab is a new generation zero-emissions capable range extended electric-powered taxi, and represents the cutting edge of green transport technology with styling both evolutionary and sympathetic to the iconic black cab.  The Metrocab’s Range-Extended-Electric (REE) technology delivers a range of 560km, typically saving a London taxi driver £20-£40 per day based on the average cab duty cycle in the capital.

London Mayor Boris Johnson has described the Metrocab as “superb and absolutely beautiful. A masterpiece of British engineering.  The Rolls-Royce of taxis that can do 100mpg.”

There is still no confirmed launch date or in fact no news on the cost. It’s all very well producing a vehicle to meet stricter conditions of fitness, but if drivers can’t afford it, then it’s all been a complete waste of time and money.

Having said that, of course we all want cleaner vehicles, cleaner air and we at Taxi Leaks would love to see this pan out as an overwhelming success story. Range Extended Electric Vehicles does seem to be the most sensible direction to offer London better air quality. But not at any price?

We must not let ourselves fall into the trap of being the Mayors personal Guinea Pigs. Why haven’t range extended electric vehicles been trialled with London’s most polluting vehicles, such as the buses. There short routs between garages and bus stations make them the perfect place to start. As we saw in the recent 24hr strike, with under two thirds removed from the road, Central London’s pollution levels dropped by over 50%.

As Taxi drivers we are at the forefront as a group who have to endure poor air quality affecting our health. So cleaner vehicles such as REEVs should promote better health amongst road users and pedestrians alike.

But what are the real benitifs in comparison with the likes of Mecede’s and BMW’s cleaner euro 6 standard, Diesel engines?