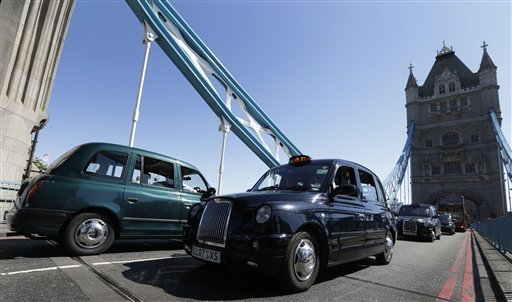 LONDON (AP) — Confusion, frustration and delays reigned on London’s congested roads Wednesday, as lanes reserved for Olympic VIPs came into force two days before the start of the games.

Traffic jams blocked some of the main routes into the city as the wildly unpopular “Games Lanes” took effect. The 30 miles (48 kilometers) of lanes are to operate from 6 a.m. to midnight throughout the games, and cars or taxi cabs that stray into them face a 130-pound ($200) fine.

Thousands of London drivers have switched to public transport, only to encounter severe delays on several Underground subway lines caused by power supply problems and signal failures. Severe delays were reported on the city’s Central and Hammersmith subway lines with ripple delays affecting other lines.

British officials — who have been advising Londoners for weeks to plan ahead, allow extra time or just stay home — advised a stiff upper lip.

“There will be a lot of disruption and London is a congested city anyway,” Transport Secretary Justine Greening told BBC television.

As host city, London is as cosmopolitan as they come, but transport is its weak spot: Traffic often clogs up on its narrow, historic roads, bus schedules can change at a moment’s notice, and the famous Underground suffers from daily delays and infrastructure that in parts is more than a century old.

For a city of its size, London has surprisingly few highways or wide thoroughfares, which means that most roads have multiple traffic lights and pedestrian crossings. Olympics organizers have repeatedly urged people to avoid driving their cars, to walk and bike ride around, and for spectators to go to events using public transport.

“Drivers do have somewhere to go, but it’s been a bit confusing,” said Paul Watters, head of road policy at the British Automobile Association. “We know it’s going to be tricky and difficult, and it’s bound to be full of teething problems. We’re almost there now so hopefully it will be better.”

Critics argue that the Olympic lanes — open only to athletes, officials, journalists, emergency services and games marketing partners — are elitist and make life difficult for everyone else. Britain relies on traffic cameras to spot infractions, so many people won’t know they’ve been ticketed till the bad news arrives in the mail.

To make things even more confusing, the lanes will be open to regular drivers if Olympic traffic is light, with the information displayed on electronic signs.

The International Olympic Committee had specifically demanded the lanes be created after learning lessons from previous games — one of the worst being Atlanta in 1996, where bus drivers got lost and some athletes arrived moments before their events.

In London, some of the loudest opposition to the Olympic VIP lanes has come from the city’s cabbies, who have staged two recent demonstrations that brought central London traffic to a standstill. They say being banned from Olympic lanes jeopardizes their business by creating much longer — and costlier — cab rides for customers.

“We’re not going to be able to drop passengers where they want to go,” said Lee Osborneof the United Cabbies Group, which protested with about 50 cabs at Tower Bridge on Tuesday. “Traffic in London is pretty bad as it is, and now passengers are going to suffer with the meter just ticking away.”

London’s Tube network is the most popular way to get across town, but it groans with age — its first line, the Metropolitan, opened in 1863. Today, that line still runs alongside more than a dozen others in a half-modernized system that handles roughly 12 million trips a day.

Officials are expecting up to 15 million subway trips a day during the Olympics.

In all, the British government has injected 6.5 billion pounds ($10 billion) to upgrade the transport network for the games. Whether that is enough is still an open question.

“It can’t even cope in normal times, all it takes is one problem and the whole system gets paralyzed,” said Tony Shelton, an accountant who was riding the Northern line. His journey was only slightly delayed but he said: “I’ll probably avoid coming into town.”