What Next a For Uber, Can They Douse Their Poisonous Flames….by Perry Richardson. 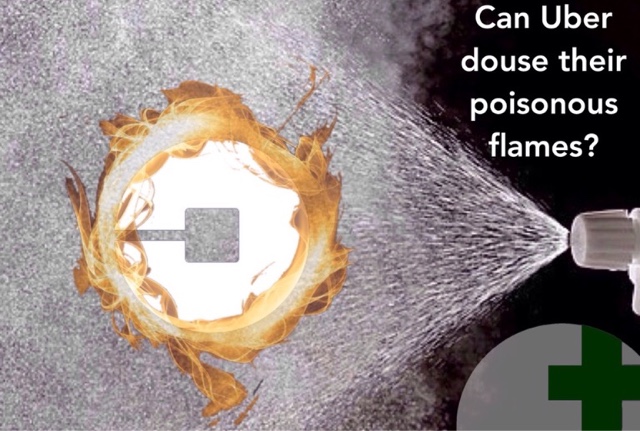 You could be forgiven if you thought you heard the immortal words from Lance Corporal Jones echoing around the Iron Lung or at any rank in London in recent days.
Uber, the car service that claim to be a tech company when it suits, are currently flexing their PR muscles in an attempt to stop a new TfL private hire regulations clamp down strangling their global business model.
In the last week, paid for articles in London publications are asking Londoners to question why all private hire drivers should be required to speak English and to carry the correct insurance.
This PR campaign seems to however had the complete opposite affect that the American based company were hoping for. Comments, articles and blogs from long standing Uber customers are now questioning why they do not support a regulation change that meant drivers had the bare minimum insurance policies in place. In fact, on the back of the recent Brexit result, many of their customers are also questioning the impact of using a low cost immoral business model that relies on low skilled foreign drivers who have little understanding of the English language.
The penny is now dropping all around London with customers finally taking the time to question aspects of their service. One recent article questions how Uber have invested £100m in London alone. He wondered how a tech company with no employees, vehicles or assets could have spent such a total. Only then has he come to the decision that Uber are in fact offering services below their market value to remove competitors. The prices customers now see will not last forever.
Make no mistake Uber are struggling to retain drivers at the moment. They are very coy on their driver turnover and only proudly release the number of registered drivers currently standing at just over 25,000. That however doesn’t tell the full story. Drivers on the Uber platform do not resign, or receive a P45 when they leave. They instead simply hold their finger down on the Uber icon situated on their mobile phone and press delete. It is estimated that an average Uber driver works the platform for 6-12 months before either leaving or supplementing the work using other apps or illegal touting, before than leaving completely.
This turnover wasn’t a problem when Boris Johnson was Mayor of London as the supply of new drivers was high. On average 600 new private hire drivers each week were entering the market. Roll on to recent weeks since the tighter insurance rules have been set and we are seeing a reduction of new entrants as high as 75%.
So it raises the question; just how many of those 25,000 Uber drivers are actually active? It’s very much a numbers game for Uber. Their business model doesn’t rely on keeping drivers happy and motivated. Instead it’s all about luring them in, promising riches and hoping the drivers keep trying to bite on the carrot dangling in front them. It also relies on referrals, but with Hire and Reward insurance so costly and now a required document, drivers are now struggling to coerce family and friends to sign up.
Alarm bells are now ringing furiously at Uber HQ, but with no Cameron, Osbourne, Johnson, Hendy or Daniels to assist them, they are finally left alone to douse their own poisonous flames using London’s paid for media. Currently, as it stands, it’s not enough.
What next for Uber