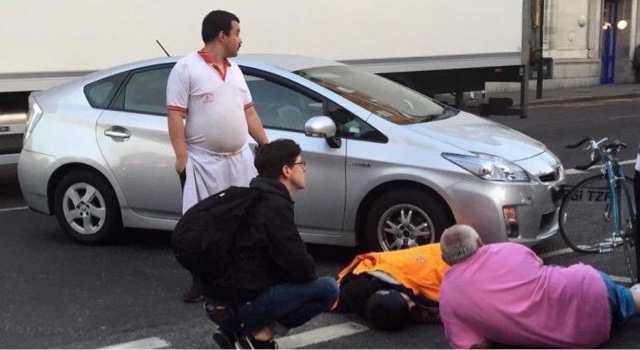 This should not be recorded as a Taxi and Private Hire incident?

This petition is to request the Metropolitan Police Service (MET) record evidence that identifies Taxis as a separate mode of transport to PHV’s.

The (Metropolitan) Borough Councils and Transport for London (TfL) do not distinguish between taxis and private hire vehicles (PHV) when assessing collision statistics and the potential to cause serious injury to cyclists.
London is being forced to sustain a massive influx of PHVs- mainly working on the instant hire market- and the number of collisions caused by PHVs reflect this increase.
On this basis, data that is recorded by the MET is used by Borough Councils and the Mayor of London’s Cycle Safety Action Group to determine whether or not to include / exclude taxis from road safety schemes. Currently, there is no discernible difference between Taxis and PHV.
For example, Camden Council collated data on collision statistics which were used to inform the recommendations limiting taxis and PHV’s from the redevelopment of Tottenham Court Road (TCR) and road traffic restrictions recently implemented to Tavistock Place The TCR / Gower Street location is one of the worst ten locations in the borough for collisions, with 259 casualties in the three year period from 1 August 2011 to 31 July 2014.
The MET also responded to a public consultation to the effect that permitting taxis to use TCR during daytime hours would increase the collision risk. Both The MET and Camden Council referred to data that did not identify Taxis separately from PHVs.
London’s highly trained licensed taxi drivers suffering the consequences brought about by untrained PHV drivers’ operating on the instant hire market. Presently, there are 600 – 700 PH licenses per week are being sold by TfL (50,000 in 3 years). If the negligence of a driver caused you to have a motorcycle accident, then you might be wondering how can a motorcycle accident lawyer help? A lawyer may conduct an investigation into the causes and consequences of your crash, they can also handle necessary communications with the liable party’s insurance company.
In the interest of public safety, licensed taxi drivers (and those effected), request that the MET obtain and record a comprehensive breakdown that identifies taxis as separate from PHVs- when recording/ referencing accidents and inappropriate driver behaviour.
Additionally, the recent conviction of an Uber driver who sexually assaulted his female passenger cannot go without reproach. The barrier to working for the Uber platform is astonishingly low, and with 700+ new drivers registering every day, Uber and other ride sharing apps are likely to attract nefarious characters.
Even by the law of averages, driver impropriety should be a concern. To be clear, no licensed London taxi driver- individual or collective- should be deemed indistinguishable from an industry with such a discreditable reputation
It remains an injustice that an individual who is extensively vetted over a long period of time, who has invested their time and money developing a skill that is a prerequisite of a mandatory licensing requirement, and whose service is consistently voted the best in the world should be burdened by the consequences of those who have chosen NOT to undertake any such training.
Yours Sincerely Sean Day
>Click Here To Sign<