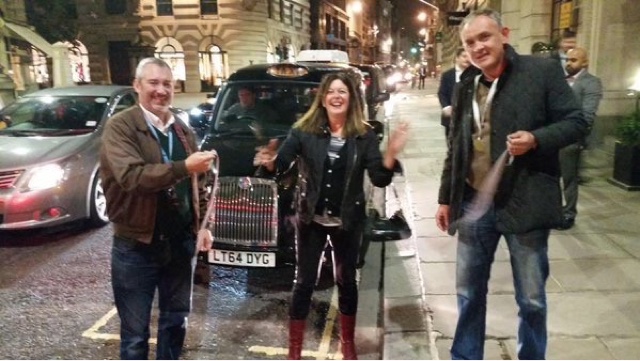 It is eighteen months since I took my first tentative steps into the world of the black cab trade:  I made a call to Nick Ferrari on LBC in support of the 2014 taxi demo.  Little did I know what the next year and a half would hold in store for me.
During these intervening months I have tried to campaign for the trade in any way that I can, whether that is by writing articles in the trade press, hassling MPs and councils, turning up to demos or handing out leaflets on ranks.  I have observed personally the duplicity of politicians at all levels, the ineptitude of the so-called regulators at TfL and the crass behaviour of the media when it falls prey to the power of cash-rich lobbyists and vested interests.
But it is not all doom and gloom.
I have been astonished by the determination and resilience of the London black cab drivers.  They, after all, are the people who are at the coalface and see day to day exactly what is going on.  They are the people who justifiably guard their Green Badge achievement jealously against the infidels’ attacks.  They are the people who take such care with the disabled, mothers with small children, the military and the elderly.
And this is not the half of it.  Drivers have realized through the outstanding example of the Mayfair Mob that they can empower themselves to fight back and keep their position as the world’s gold standard.  They can and do embrace new technology and have adapted it to their world rather than letting the trade be subservient to the technology itself.  New apps, Twitter, smartphones, credit cards:  all these devices can be made to boost, rather than impair, the trade.
The other impressive discovery I have made is the extraordinary humanity of the drivers.  I have never before come across so many selflessly generous individuals.  I am proud to have become a Vice-President of the Taxi Charity for Military Veterans, and have seen at first hand the level of giving that epitomizes this trade.  Add to that all the work done through the Poppy Cabs, the Albany Taxi Charity among many others, and the collections for a wide variety of causes that take place on a regular basis at Heathrow.  All this takes place at a time when the trade has suffered some serious financial knocks.  This goes beyond duty – it is something precious and exceptional.
I am also very proud to have made some wonderful friends in the last eighteen months.
Drivers often ask me why I have become involved.  The answer is simple:  it is the drivers themselves that have won my unswerving loyalty.  I truly hope that every one of you will have a better 2016.
Frances Luczyc Wyhowska