First we had the scandal where perfectly capable FX4s and TX1/2s were replaced by more polluting TX4s and Vito Taxis, now we are told the the all new Boris bus isn’t as clean as we’ve been led to believe.

Of course, every time Boris, Daniels or Emmerson talk about London’s air quality strategy, they stick to the TfL spin doctor’s script; “we’ve removed thousands of older, dirty Taxis and replaced with newer less polluting vehicles”.
This is of course a lie, exposed by the Kings report 3 years ago, a report buried by the Mayor and TfL.
The latest scandalous news broke over the weekend that Londoners have again been lied to and conned by TfL. Is it any wonder that two of TfL’s top brass have fled the sinking ship!

The Boris Bus turns out not only to be an expensive scandal, but it is also a dangerous con.

As well as posing a safety risk, the buses are not operating in the environmentally friendly way that was promised because the batteries which are supposed to provide the vehicles’ hybrid power are frequently failing. Consequently, the Boris Buses are running as old-style diesel buses, with a high fuel consumption and high pollution output.

One driver has been sacked following his persistent refusal to take out what he felt were unsafe buses and he is taking the bus company to Employment Tribunal over unfair dismissal.

Another driver told me: “There is going to be an accident and someone will get seriously hurt. We want to stop that and that is why we are talking to you.”

The cost to Londoners of replacing the faulty batteries on the malfunctioning buses could be more than £20 million. 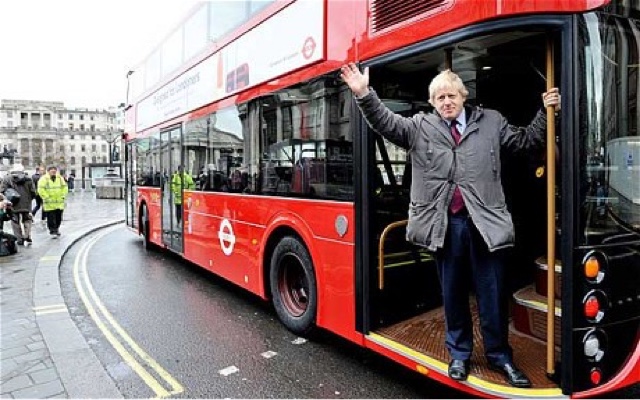 The Bus for London was introduced in 2012 after being commissioned by Boris Johnson following an election pledge to restore conductors and an open back door to London’s double-deckers. The bus was designed by Thomas Heatherwick, who is involved in another Boris vanity project, the equally controversial Garden Bridge.

Forty bus drivers at Holloway Garage have prepared a dossier – which I have seen – on the many faults of the new bus. The drivers report that because the batteries powering the hybrid system do not work, the buses operate on diesel for 90 per cent of the time.

Wolmar has called for an “urgent” review of the procurement process used to buy the buses and for their operation to be assessed “by an independent panel of experts.”

The No 24 route is operated by Metroline, a subsidiary of ComfortDelGro, a Singaporean conglomerate which operates nearly 50,000 buses across the world. The company has refused to address the drivers’ concerns and has ignored their attempts to explain the dangers.

Read Christian Wolmars Blog post in full: >click here<
As we have come to expect, TfL have made a statement denying the Mayoral hopefuls claim.

Leon Daniels, Managing Director of Surface Transport at Transport for London, says bus operator Metroline, which operates the Holloway Garage, “are not aware of any issues arising from changes between electric and hybrid modes in service and they have had no such problems reported to them by their drivers.”

He added: “However, concerns have been raised previously about the performance of the batteries on the earlier vehicles.

So what is it Leon “NOT aware of any issues” or ” concerns HAVE been raised”.

“Personally I think this stems from the rush to get through this vanity project.

“They’re not really a practical bus for London. The common practice now is to take the batteries out of the buses so effectively these very expensive environmentally friendly buses are just running on diesel.”

These buses have been bought by TfL, as  bus companies thought them too expensive.

Leon Daniels has been widely featured in the trade news after giving out Jo Bertram’s private number to a City hall inquiry when asked for Uber’s public land line. One trade journalist said “it’s got to a point where we can’t believe one word that come from this man’s mouth”.

Many in the Taxi and Private Hire industry believe that Daniels days at TfL are seriously numbered.