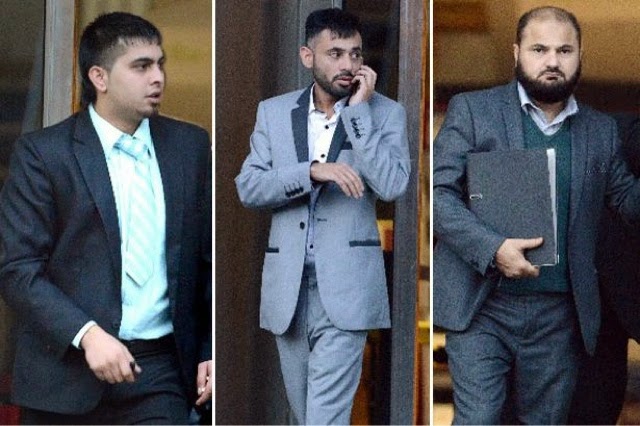 A minicab driver, his uncle and nephew are accused of raping a drunk schoolteacher on a park bench after abducting and trafficking her from his minicab, a court heard.
The unconscious woman is alleged to have passed out after drinking at a birthday celebration before she came round to find one of her abusers having sex with her.
Private hire driver Tamseel Virk, 42; uncle and nephew, Azad Raja, 38, and Wakar Akhtar, 21, along with Najeem Ul-Saeed, 31, all of Bradford, West Yorks, are standing trial at Bradford Crown Court accused of conspiracy to rape between May 25 and 26 this year.
Prosecutor Andrew Kershaw told the jury that Virk picked up the woman from a street in Leeds, West Yorks., in breach of his licence, shortly before midnight on May 25.
Mr Kershaw suggested the fare was not reported to Virk’s controller because he had identified a vulnerable woman who could be sexually exploited.
The court heard she was ‘noticeably affected’ after drinking lager and whisky in a pub with friends, ‘talking gibberish’ and left her jacket, handbag and phone behind.
Mr Kershaw said Virk ‘delivered’ her to Akhtar and Raja, getting her to commit a sex act on him on the way.
The jury heard she was dropped off near their home and raped in turn on a bench in Great Horton Park, Bradford, while she was unconscious.
Mr Kershaw said: “They manhandled her, causing bruises and minor injuries to both of her knees, as if she were put in a kneeling position on the ground.”
The jury was told the victim woke up while Raja was having sex with her. Akhtar is alleged to have told her he had already had sex with her.
Ul-Saeed, the lawyer added, then turned up ‘too late physically to join in the rape that he had set up.’
Mr Kershaw added: “The prosecution case is that there was a conspiracy to rape (the woman) while she was in no fit state either to consent or resist.
“Akhtar and Raja conspired to rape her because they both agreed to do so; to take delivery of her and rape her together in each other’s presence.
“Virk, the prosecution say, is part of the same agreement because he delivered the girl to Akhtar and Raja for them to rape her.
“Virk knew that she was in no fit state to consent or resist because he had been able to abduct her to Great Horton Park, rather than take her home.
“Ul-Saeed is also part of the same agreement because he trafficked her from Virk to Akhtar and arranged where and to whom she was to be delivered; he tried to organise a hotel room and attended at the park to join in but was too late because she had regained consciousness by then.”
The four men deny the charges and the trial continues.
source: http://www.mirror.co.uk/